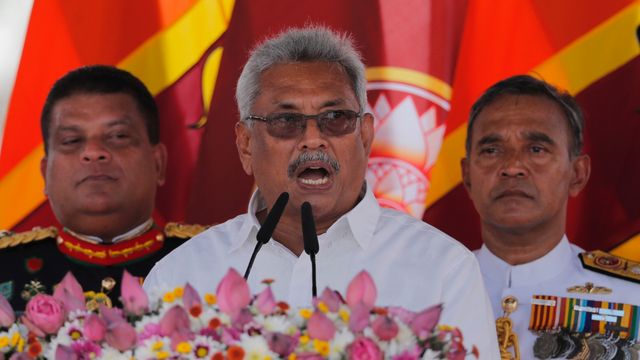 Newly-elected Sri Lankan president, Gotabhaya Rajapakse, has made several significant appointments of former military officers since the November 16 poll to bolster his already extensive powers and give greater control to the armed forces.

One of the most important was his selection of retired Major General Kamal Gunaratne, who has already been appointed defence secretary, to be chairman of the Telecommunication Regulatory Commission of Sri Lanka (TRCSL).

The TRCSL has considerable powers, including over the internet and social media, the licensing of radio stations and television channels, and investigating complaints against these media platforms. The TRCSL was placed under the direct control of the defence ministry in March by former President Maithripala Sirisena, who selected General Shantha Kottegoda to head the commission.

Rather than appoint a defence minister, Rajapakse has brought defence ministry functions, as well as the law-and-order ministry, under control of an unelected bureaucrat—the defence secretary. The decision breaches the Sri Lankan constitution, which, according to the 19th amendment, bars the Sri Lankan president from holding ministerial positions. Under this amendment, passed during the previous government, the president can only appoint an MP as a cabinet minister, following consultation with the prime minister.

Defence secretary Gunaratne is a long associate of Rajapakse and played a key role in organising his presidential election campaign. The former major general commanded the army’s 53 division during the final phase of the brutal war against the separatist Liberation Tigers of Tamil Eelam (LTTE) and has been accused of gross human rights abuses. An estimated 70,000 civilians were killed in the conflict.

Having appointed his brother and former President Mahinda Rajapakse as prime minister, Gotabhaya has also installed his eldest brother Chamal Rajapakse, a national list MP, as the state minister of defence. This is a junior post and not a cabinet ministerial position. He was, however, already the minister of agriculture and mahaweli development and therefore a cabinet member.

On November 27, the Police Commission suddenly announced that it was shutting down its media division. While no explanation was provided, some media outlets have reported that the decision followed a “request” from the law and order ministry. Under the new arrangements, police media briefings will be conducted by defence personnel. Chamal Rajapakse later confirmed this, stating, “We will have a common media unit for the Tri-Forces [army, navy and air force] and the Police.”

In another move, President Rajapakse has for the first time appointed a military officer, Brigadier Suresh Sallay, to head the country’s State Intelligence Service (SIS). The spy agency previously operated as part of the police department. New SIS chief Sallay is the former head of military intelligence.

The SIS is notorious for its spying, frame-ups and persecutions of workers, youth, journalists and anyone critical of the government and its repressive state apparatus.

In reality, the Sri Lankan military and intelligence apparatus as well as top government and political figures had been forewarned of the attack but deliberately took no action. In its aftermath, the political establishment as a whole exploited public outrage to whip up communal antagonisms.

While Rajapakse is ignoring the country’s constitution and intensifying his efforts to concentrate greater power in his own hands, not a single opposition party or the media has criticised, or raised any questions, about these moves. All have abjectly adapted to his actions, accepting the false claims that Rajapakse received “a massive mandate” in the presidential elections.

On assuming his duties as TRC chairman, retired Major General Gunaratne told commission employees that the Sri Lankan population had “high expectations” that the new government would put “the country back into the correct track and develop it.” State sector workers, he said, had to perform well and fulfill these aspirations.

“Singaporean leaders always remind their people to serve more than now,” he said, explaining that large digital screens in the city-state call for everyone to “Give a little bit more and to perform well to serve more.” He expected the same from the Sri Lankan people and all state employees, he declared.

Singapore is a police state where the democratic rights of the workers have been brutally suppressed in line with the demands of international finance capital. Confronting a deepening economic crisis and the rising social opposition of workers, youth and the rural masses, the new Sri Lankan president is desperately attempting to consolidate his government in preparation for a confrontation with the working class.