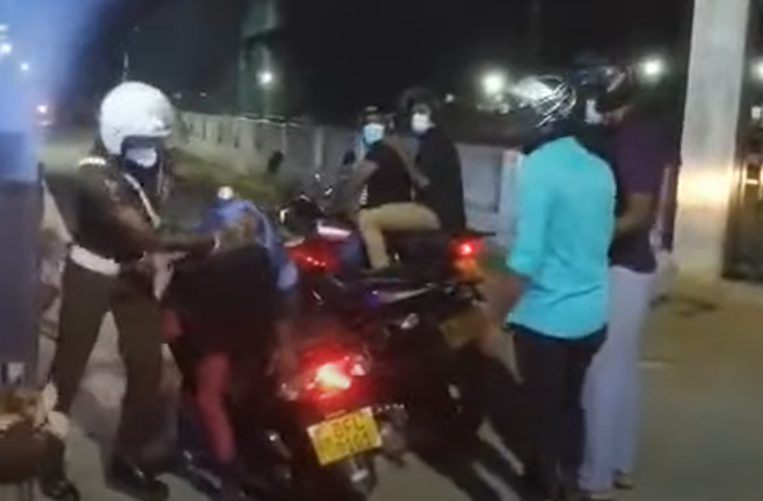 A Sri Lankan police officer was seen brutalising two Tamil citizens in Batticaloa this evening, kicking one individual and dragging and slapping another individual on a motorcycle.

The two Tamil men, Thissasekaram Dilip and Thillainathan Kalairasan from Chenkaladi, were attacked by a traffic police constable attached to Eravur police, for not stopping their motorcycle.

The incident follows growing international condemnation of Sri Lanka’s police force with Human Rights Watch (HRW) urging international partners to cease their engagement with “abusive Sri Lankan law enforcement agencies until there is demonstrated the political will to address the situation”. In their report, HRW details how Sri Lankan police have committed grave abuses under the guise of the pandemic. These abuses include arbitrary detentions, police brutality, torture, and extrajudicial killings.

Responding to the assault, Tamil National Alliance MP, R. Shanakiyan tweeted that “police brutality continues in Batticaloa and will fall on the deaf ears of Sarath Weerasekera”. Earlier this week, public security minister Weerasekera announced that ‘human rights charges’ levelled against police officers in active duty would be dropped if charge sheets against them are not completed within a six-month time frame.

The proposed amendment effectively grants immunity to officers if the cases of human rights abuses, and subsequent investigations, are not completed within the six-month time span.