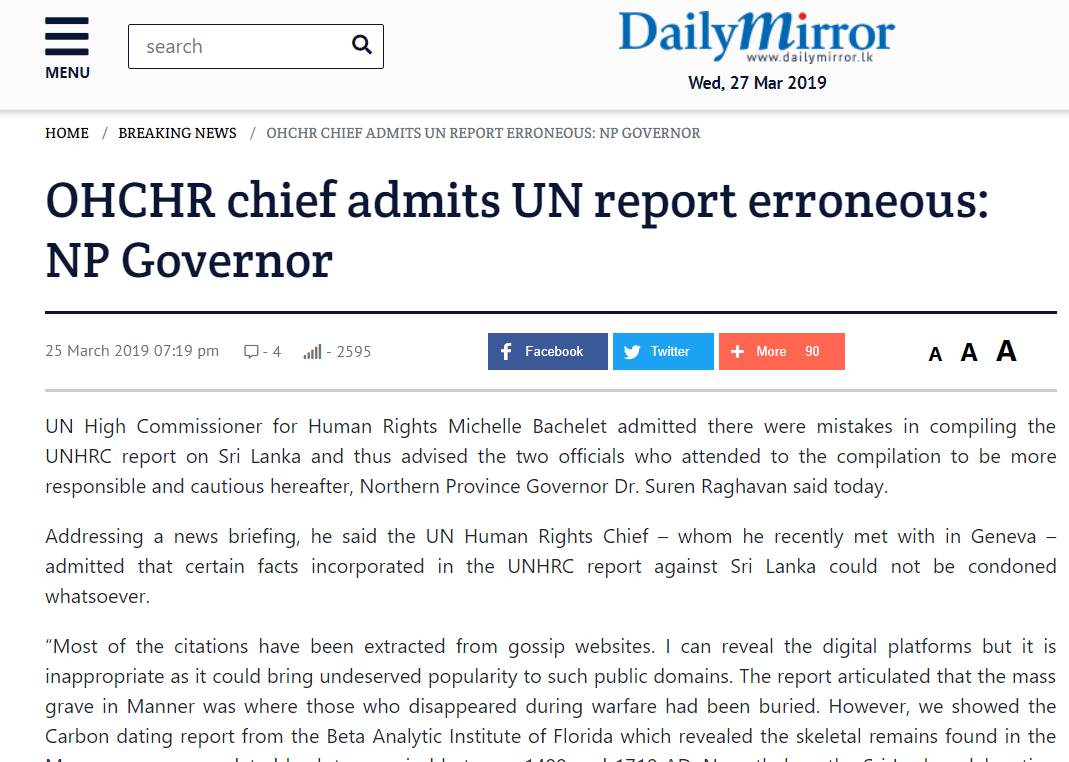 Monday’s article in Sri Lanka’s Daily Mirror newspaper cited a member of the Government delegation, Northern Province Governor Dr. Suren Raghaven, claiming the High Commissioner “admitted that certain facts incorporated in the UNHRC report against Sri Lanka could not be condoned whatsoever.” It also said he claimed she had advised two of her senior officials who attended the meeting “to be more responsible and cautious hereafter.”

“Neither of these claims are true,” Bachelet said. “Either the newspaper misunderstood the Governor, or the Governor misunderstood – or misquoted – me.” The High Commissioner said she stands fully behind the report and the oral statement2 she made when presenting it to the Human Rights Council, and that she believes it fairly and objectively reflects the situation in Sri Lanka.

“I am deeply disappointed by the spin that has been put on my discussion with the Sri Lankan Government delegation,” she said, noting that other news outlets in Sri Lanka were also continuing to significantly misrepresent the Human Rights Council process in Geneva.

In line with normal practice, the UN Human Rights Office report – which had been requested by the 47-member-state Human Rights Council – was shared with the Sri Lankan Government in advance of its publication. The government’s views were taken into account when finalizing the report, and a delegation of senior UN human rights officials discussed its contents with a wide range of Government officials during a visit to Sri Lanka in February.

The High Commissioner said she and her Office remained committed to assisting the Government and people of Sri Lanka to implement the Human Rights Council’s resolutions 30/1 (2015) and 34/1 (2017). And last week the Human Rights Council in another resolution (40/1) gave the Government two more years to deliver fully on the set of commitments it originally accepted four years ago.

Bachelet said the Sri Lankan Government should now refocus its efforts on fulfilling its obligation to provide justice and accountability for the grave human rights violations and abuses that took place during the conflict that ended in 2009, and honour its commitments to establish the truth about what happened and to promote reconciliation.