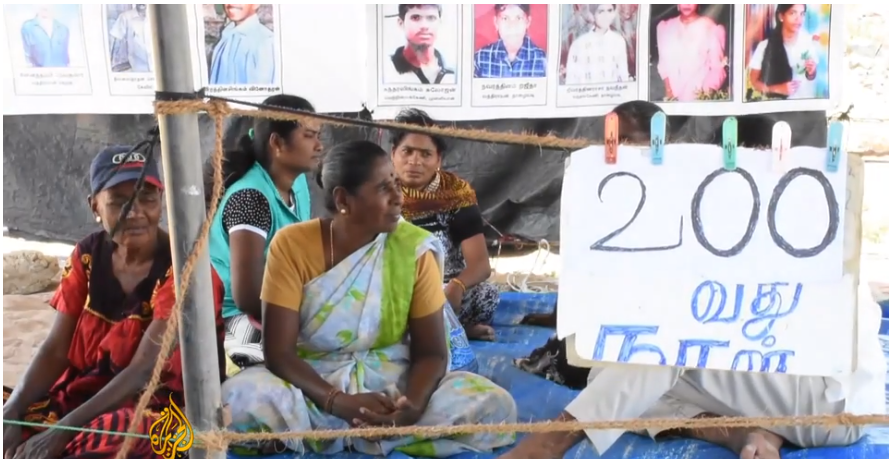 He later called her to inform her he had been arrested with several other ethnic Tamils, but it was the last she ever heard from him.

Breaking down in tears, Pushparani recalled: “He would always take me around on the motorbike, so I never walked anywhere; but now we have no one.”

The United Nations estimates that up to 100,000 people were killed during the fighting between government forces and the Tamil Tigers, an armed secessionist group.

At the height of the conflict, some 800,000 people were displaced.

Pushparani is not alone. She is one of hundreds of Tamils waiting for news of relatives who went missing during the 26-year conflict. Across the country’s north, where the ethnic group constitutes a majority, families have been staging protests to demand justice.

‘They must give us answers’

Rathnasingham Muralither, a spokesperson for the Association of Families of the Disappeared, said the government should work harder to provide the aggrieved families with closure.

Speaking to Al Jazeera, Muralither sat on a tarpaulin in a protest tent maintained by relatives of missing for more than 200 days.

“Either [our relatives] are alive or they are not. They [the government] have to tell us that,” he said. “We will continue our campaign until they do.”

On October 1, 2015, the UN adopted a resolution calling on Sri Lankan authorities to investigate allegations of war crimes and human rights violations during the upheaval. That resolution mandates that the government address and investigate enforced disappearances.

In order to ensure justice to civil war victims, the government was meant to establish four transitional justice mechanisms to address various war crimes that were committed, among them forced disappearances.

“As a free and peaceful country, we hope to address allegations and take on board suggestions of how we should deal with them in a slow but effective journey toward a clear target,” he said. “I ask for your support while we do that.”

In March, Zeid Ra’ad al-Hussain, the UN High Commissioner for Human Rights, urged the Sri Lankan government to make good on promises to implement a “comprehensive strategy” to address crimes committed during the war.

Although Sri Lanka has made advances in the field of human rights, Hussain added, the “slow pace of transitional justice” has created the “risk [of] derailing the momentum towards lasting peace, reconciliation and stability”.

Rights groups and critics echo accusations that authorities have made little progress. KS Ratnavale, a lawyer who represents several war victims, said that families of missing people are “very much disenchanted”.

“They are on a war path because the government is unwilling to take on the security apparatus,” he told Al Jazeera. “Ultimately it is the army and the government who the people are alleging did this.”

Back in her home,Pushparani continues to wait for progress. “This was my youngest child,” she said. “We can’t imagine living without him.”