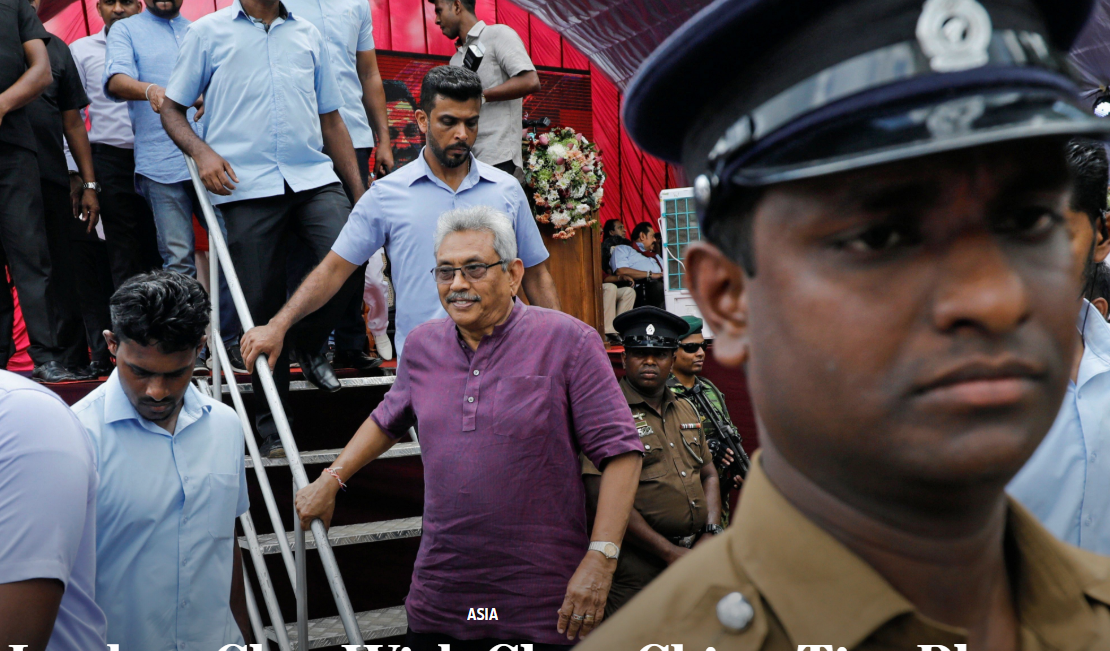 Edited image: Gotabaya Rajapaksa, leaving a campaign rally this week, is running for president in the Nov. 16 election. DINUKA LIYANAWATTE/REUTERS.

The Rajapaksa family’s prior rule was stained by allegations of human-rights violations and corruption, sparking worries in Western capitals.

COLOMBO, Sri Lanka—A controversial political dynasty that made Sri Lanka a centerpiece of China’s efforts to expand its influence in Asia and defeated an insurgency is aiming to reclaim power in this island nation.

Gotabaya Rajapaksa, who as defense secretary spearheaded the effort to crush a three-decade-long revolt during his brother Mahinda Rajapaksa’s rule from 2005 to 2015, is now running for president in the Nov. 16 elections.

The war victory against guerrillas from the Tamil ethnic minority was lauded by many of the country’s Sinhalese Buddhist majority, but it was marred by allegations of widespread human-rights violations.

Now, those human-rights issues and a possible Sri Lankan shift toward China under the Rajapaksas is causing concern in Western capitals. Washington, along with allies such as India, is seeking to counter Chinese influence in the Indo-Pacific and, as the U.S. sees it, keep the region open for global commerce.

Sri Lanka became an early adopter of what became China’s Belt and Road Initiative infrastructure program, which aims to strengthen Beijing’s sway through Asia and beyond by building infrastructure.

The Rajapaksas were succeeded by a more pro-Western government, under which Sri Lanka became a new logistics hub for the U.S. Navy in the Indian Ocean. Washington wants the new Sri Lankan government to sign on to a U.S. economic aid program, and agree to an expanded U.S. military presence. Those pacts are less likely under the Rajapaksas, say diplomats and analysts.

The brothers deny the allegations over human rights. They say they had no choice but to turn to China to fund development back then, as other countries weren’t offering financing. This time, they say they hope to attract investment from more countries, including the U.S.

“If we made some mistakes under our previous government, we will make sure that will change,” said Basil Rajapaksa, a third brother, who manages Gotabaya’s campaign.

European countries worry that any rollback on democracy and human rights could require them to again halt Sri Lanka’s preferential trade access, as they did during the previous Rajapaksa administration and restored only two years ago.

Critics say the 2009 war victory came at a high cost to human rights, including the targeting of civilians and the mass disappearance of surrendered fighters. They also accuse the Rajapaksas of conducting murky business dealings, cracking down on dissent and having links to Buddhist extremists, not to mention nepotism.

“The Rajapaksas come with baggage,” said a senior Western diplomat. “They won the war, but lost the peace. The big question is, have they learned?”

The main contender against Gotabaya, from the outgoing government, is Sajith Premadasa, who also is popular among the Sinhalese Buddhist majority.

In the past five years, the government has taken some halting steps toward determining accountability for abuses during the war, and civil liberties have improved. But it, too, has been criticized, for corruption, dysfunction and failing to act on intelligence that could have prevented the terrorist attack in April that killed more than 250 people. The economy also slowed sharply.

Eran Wickramaratne, deputy finance minister in the outgoing government, conceded that the administration hadn’t met expectations on anticorruption and said that Sri Lanka had been hit by a slowdown in global growth. But he said, “We’ve strengthened democracy,” adding, “We have a much more open foreign policy.”

The Rajapaksa family has been maneuvering to return to power for several years. Mahinda’s failed attempt to become prime minister last year threw the country into a constitutional crisis. The Rajapaksas were established in politics by the father of the four brothers who now head it. The next generation is also coming up through Mahinda’s son, Namal, a member of parliament.

Gotabaya, who recently gave up his U.S. citizenship to run for president, is touting his security credentials on the campaign trail, following the attack by Islamic State-inspired extremists this year that has weighed on the economy.

“Gotabaya Rajapaksa is very much part of a global trend of the ‘strong man,’ offering a strong state, with public order and security,” said Jayadeva Uyangoda, a politics professor at Colombo University. “These politicians make use of a deep sense of public insecurity.”

Gotabaya has said he would free military officers now in detention over human-rights allegations and withdraw Sri Lanka from a United Nations-backed program to try those accused of war crimes.

“Unlike the politicians who are backed by NGOs and foreigners, we will uphold the dignity of all war veterans,” he said recently.

Basil Rajapaksa outlined plans for $5 billion of projects the family hopes to begin within months if they win, including power plants, highways, clean drinking water infrastructure and renewable energy.

“In these past five years, nothing has happened, so we have to accelerate our work,” he said.

Basil said that this time they were looking to finance infrastructure through investment rather than debt, and they were open to all countries taking part. The Rajapaksas have in particular reached out to India.

Still, Sri Lanka, along with many other countries, have found that China alone can deliver big projects quickly.

“It is only China, which has a bank, which has good relations with this country, and which has the Belt and Road Initiative,” said Bernard Goonetilleke, who served as Sri Lanka’s ambassador to Washington under the last Rajapaksa government. “It fits very neatly.”

Jeff Smith, a research fellow at the Heritage Foundation, a think tank in Washington, said that the U.S. has maintained working relationships with “characters far less savory or legitimate” than Gotabaya.

“There are concerns in the West about Gotabaya Rajapaksa but he is genuinely popular in Sri Lanka so I think we have to be prepared to respect the will of the Sri Lankan people until and unless he does something beyond the pale,” said Mr. Smith.

Courtesy of the www.wsj.com