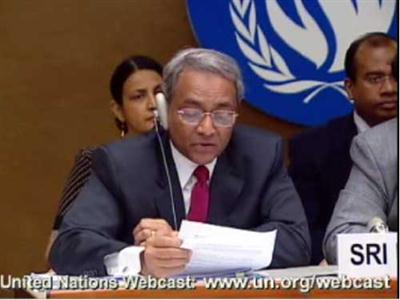 By Sanjaya Jayasekera and Sujeewa Amaranath
Sri Lanka’s Chief Justice, Mohan Peiris, recently made remarks that openly attack democratic rights, in line with the government’s police-state methods. He declared that human rights existed to “protect the majority and not the minority of criminals” and the prime concern of the executive and judiciary was “national security.”
Peiris made his comments on May 22 while hearing a fundamental rights petition filed by M. Nimalaruban, father of Ganeshan Nimalaruban, an alleged member of the separatist Liberation Tigers of Tamil Eelam (LTTE). Nimalaruban died from injuries caused by the suppression of a prison protest by police commandos at northern Vavuniya jail in June 2012. Inmates had launched a hunger strike against the transfer of three prisoners to a jail in the south of the island. They took three guards hostage.

Injured prisoners were transferred to a prison near Colombo, but Nimalaruban died several days later, supposedly of a “heart attack.” Another inmate died later. A court allowed Nimalaruban’s body to be brought back to Vavuniya but imposed strict conditions, including the banning of a funeral gathering, to prevent any public protest.

The chief justice’s outburst followed a request by the lawyer appearing in the fundamental rights case, Saliya Peiris, for a copy of a confidential report on Nimalaruban’s death, submitted to the court by the attorney general. The chief justice refused the application, declaring: “Why do you need this? This is the way you all procure the evidence and then circulate it to the entire world to tarnish the image of the country… The executive submits confidential reports only for the eyes of judges, particularly [when] national security issues are concerned.”

“Tarnishing the image of the country” is the phrase employed by President Mahinda Rajapakse and his ministers to attack anyone criticising the government, especially over its abuse of democratic rights. The government routinely claims that there is a foreign conspiracy against the country and accuses any opposition, including by workers, youth and the poor, of helping the conspirators and putting national security at risk.

The Rajapakse government is especially sensitive to the issue of democratic rights because the US and its allies have exploited the government’s war crimes committed against Tamil civilians in the final months of the country’s protracted communal war against the LTTE to exert pressure on Colombo. Washington’s muted criticism of the government’s abuse of human rights is entirely hypocritical. Its real aim is to press Rajapakse to distance himself from the US rival, China.

Chief Justice Peiris was openly contemptuous of democratic rights, insisting that the government could use whatever force necessary to crush the prison protest. “When the prison is under siege do you want the prisons commissioner to read them the Geneva Conventions?” he declared.

Nimalaruban had not been convicted of any crime. Like thousands of Tamil youth, he had been detained as an “LTTE suspect,” following the LTTE’s defeat in May 2009, under laws that allow for indefinite detention without trial.

According to the fundamental rights petition submitted by his father, Nimalaruban had been arrested in November 2009 and held in remand for over two years. The petition declared that the detainee had been physically assaulted and subjected to torture.

The petition noted that “the death of his son was not due to natural causes but due to him having been subject to assault by the prison officers and/or by the police officers” and called for their prosecution. Nimalaruban’s father said he had observed injuries to his son’s head and legs when he was taken to the Colombo North Teaching Hospital to view the body. Nimalaruban was 25 when arrested.

Violation of the constitution and the rule of law is not new in Sri Lanka. During the 30-year war against the LTTE, successive governments built up a police-state apparatus, using sweeping powers under the draconian emergency law and the Prevention of Terrorism Act to suppress basic democratic rights, especially of the country’s Tamil minority.

The country’s judiciary has become increasingly politicised. President Rajapakse sacked the previous chief justice, Shirani Bandaranayake, in January after she ruled that the government’s plans to concentrate the economic powers of provincial governments in the hands of the central government were unconstitutional. Bandaranayake was impeached by parliament on trumped-up charges of corruption, provoking extensive protests by lawyers and sections of the judiciary. Even though Bandaranayake had been a Rajapakse appointee, the government was not prepared to tolerate any judicial independence.

Peiris, who replaced Bandaranayake, was a close confidante of Rajapakse and legal advisor to his cabinet. He played a leading role in defending the government against accusations of war crimes and human rights abuses. He appeared before the UN Human Rights Council and denied that any human right violations had occurred in Sri Lanka during the final months of the civil war.

In another recent fundamental rights case, Peiris declared that such cases should not be brought before the courts. The petitioner was challenging a decision by the land reclamation and development board to take over his land. The board operates under the defence ministry, which is controlled by the president’s brother, Gotabhaya Rajapakse.

In dismissing the petition, Peiris said the courts had no technical competence to hear some cases and that lawyers should try to negotiate settlements with the public authorities. This is nothing but a denial of anyone’s right to oppose the violation of their constitutional rights and seek legal protection from large and powerful government bodies.

The contempt for legal process and basic democratic rights in both cases by the country’s highest judge is another warning to the working class. The build up of a police state during the civil war, far from ending after the LTTE’s defeat, is continuing. It will be used against workers and youth seeking to resist the International Monetary Fund’s austerity agenda, which is being imposed by the Rajapakse government.
WSWS