Sri Lankan business Mafias that Govt and business Chambers do not see! 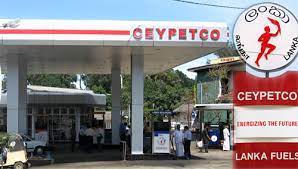 Image: Minister of Power and Energy Kanchana Wijesekera quakes in his boots when he has to deal with errant filling station owners, who have become a law unto themselves.
The government uses an iron fist only when it takes on its political rivals to further its own interests. It is now preening itself on the manner in which it stopped a recent protest staged by the Opposition and some trade unions in Colombo. It cowers, nay keeps its tail between its legs, in situations where it has to keep a firm hand for the benefit of the public. There has been a cooking gas shortage during the past few days although there are said to be enough stocks of LPG in the country. Dealers did not place fresh orders for gas due to speculation of a price reduction, we are told. Pumps at many filling stations went dry on Thursday for the same reason.

What is the use of maintaining a government with public funds if it is too impotent to serve the interests of the people? Minister of Power and Energy Kanchana Wijesekera has earned a reputation for tough talking. He thunders in Parliament, takes on trade unions with might and main and is determined to ram the petroleum sector restructuring programme down their throats. But he quakes in his boots when he has to deal with errant filling station owners, who have become a law unto themselves.

Punitive measures are called for against the filling stations that refrain from ordering fuel for no valid reasons, and thereby inflict considerable damage on the economy and cause inconvenience to the public; long lines of vehicles could be seen near petrol sheds on Thursday. Unless they fall in line, serious thought should be given to cancelling their licences. They must not be allowed to manipulate or disrupt an essential service according to their whims and fancies. They make a killing when fuel prices are jacked up, don’t they? It is seldom that petroleum prices are reduced, and overall, the filling stations owners stand to gain from price revisions.The government ought to consider ending the practice of announcing the dates of fuel price revisions so that speculation will not upset the supply-demand balance in the petroleum sector.

Meanwhile, the Consumer Affairs Authority has received a large number of complaints about various malpractices at fuel stations. Consumers have complained that some dispensing machines have been tampered with in such a way as to make the delivery pulse indicate a higher amount of fuel than what is actually pumped in. Pump attendants also cheat customers by manipulating the flow of fuel; they deliver fuel in bursts thereby making the meter race so that less petrol or diesel is delivered than the amounts indicated by the dispensing machines. Complaints of fuel adulteration abound. Customers have also complained of a racket where regular petrol is issued through 95 Octane pumps. These complaints usually go uninvestigated so much so that people have stopped complaining. This has contributed to a massive build-up of public anger, which has turned the country into something like an active volcano.

Successive governments have pathetically failed to tame the

, which is exploiting farmers and consumers alike, with impunity. Private bus operators are free to do as they please. They jack up fares when diesel prices increase but refuse to effect corresponding fare reductions when fuel prices drop. The SLPP-UNP administration cannot even crush the egg sellers’ Mafia, which has frustrated its efforts to control egg prices. Trishaw operators have also humbled the self-important government grandees; they have had their weekly fuel quota doubled, but refuse to reduce fares in spite of fuel price reductions. Bakery owners continue to dupe consumers by reducing the prices of their products by trivial amounts although there have been significant reductions in wheat flour and fuel prices. The government’s impotence seems to have emboldened the fuel station owners to maximise their profits at the expense of the public. The worst that can happen to a country is to be ruled by a bunch of corrupt wimps.