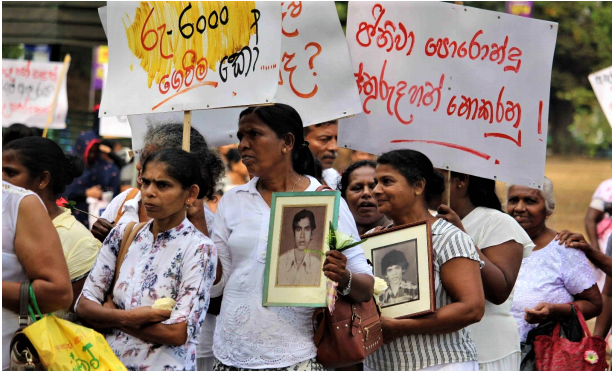 Image:  ” Do not make Geneva promises disappear!” a placard at the “Missing Lovers Day” held by the Families of the Disappeared on 14.02.2020 in Colombo.

Following Sri Lanka’s decision to withdraw from its commitments to the UN Human Rights Council in Geneva this week, Amnesty International calls on the Council to establish an international accountability mechanism to ensure the victims of decades-long conflict get the justice that is owed to them.

The call comes as the UN High Commissioner for Human Rights’ latest report on Sri Lanka raises concerns about human rights commitments being rolled back.

The Sri Lankan government has said it will no longer be cooperating with the UN Human Rights Council’s landmark resolution 30/1, which the previous government had co-sponsored, to promote reconciliation, accountability and human rights in the country.

“Sri Lanka’s decision to go back on its commitments to the Human Rights Council requires a robust response by the Council, including steps towards the creation of an accountability mechanism to ensure the victims of the nearly three-decade long conflict get the justice that is owed to them,” said Thyagi Ruwanpathirana, South Asia Researcher at Amnesty International.

Instead of implementing the commitments they have made through UN Human Rights Council resolutions, the Sri Lankan government has said it will pursue a national effort to achieve “sustainable peace” through an “inclusive, domestically designed and executed reconciliation and accountability process.”

“Sri Lanka has a long history of failed domestic accountability mechanisms. Their successive failures have bitterly disappointed victims of human rights abuses and violations, many of whom have waited years for an outcome that has failed to materialize. They need an international mechanism that is both trusted and can be effective,” said Thyagi Ruwanpathirana.

“The limited but significant gains made in recent years are at risk of being rolled back, even as we see space shrinking for civil society in Sri Lanka over recent months.”

In January and February 2020, Amnesty International has documented several cases of harassment, intimidation and attacks on human rights organizations, media outlets and journalists in Sri Lanka.

In 2015 the Government of Sri Lanka co-sponsored a landmark UN Human Rights Council resolution, 30/1, making commitments to promote reconciliation, accountability and human rights in Sri Lanka. It renewed these commitments in two further UNHRC resolutions in 2017 and 2019. In the resolutions, Sri Lanka committed to “establish a judicial mechanism with a special counsel to investigate allegations of violations and abuses of human rights and violations of international humanitarian law” and affirmed that “a credible justice process should include independent judicial and prosecutorial institutions led by individuals known for their integrity and impartiality.” It also affirmed “the importance of participation in a Sri Lankan judicial mechanism, including the special counsel’s office, of Commonwealth and other foreign judges, defence lawyers and authorized prosecutors and investigators.” Close to five years later, Sri Lanka has not yet established the mechanism.

Following the change of government in 2019, the new government announced its intentions to withdraw its co-sponsorship of the resolution’s commitments, and declared the Government’s commitment “to achieve sustainable peace through an inclusive, domestically designed and executed reconciliation and accountability process, including through the appropriate adaptation of existing mechanisms, in line with the Government’s policy framework.” The government elaborated that “this would comprise the appointment of a Commission of Inquiry (COI) headed by a Justice of the Supreme Court, to review the reports of previous Sri Lankan COIs which investigated alleged violations of Human Rights and International Humanitarian Law (IHL), to assess the status of implementation of their recommendations and to propose deliverable measures to implement them keeping in line with the new Government’s policy.”