Sri Lanka will establish TJ Mechanisms Based On Consultation With All Sections, says President 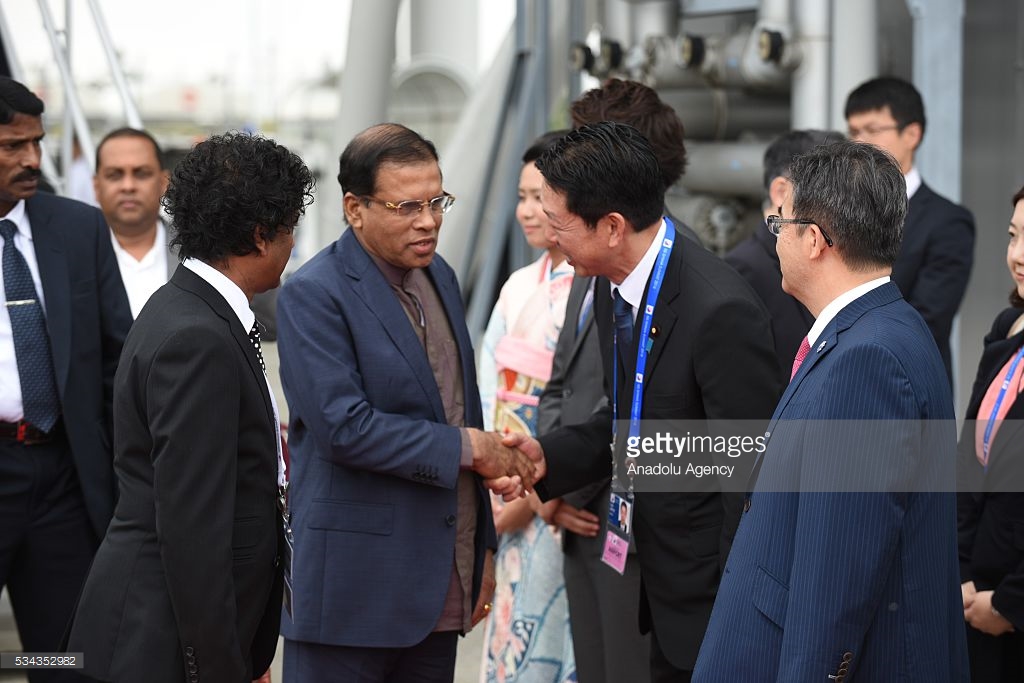 Full statement ofPresident Maithripala Sirisena on ‘Stability and Prosperity in Asia’ at theOutreach Sessions of the G7 Summit. On 27th May 2016 in Japan

I thank the Prime MinisterHon.Shinzo Abe, for the invitation extended to me to attend the Outreach Sessions of the G7 Summit. It is a privilege and honor bestowed on Sri Lanka.

Japan’s formal announcement that G7 will explore what is needed to sustain the well-being of Asia to steer economic growth, highlights the relevance of Sri Lanka being here. It endorses Prime Minister Abe’s reasoning for selecting us.

The 2016 Outreach Session’s theme is on stability and economic prosperity in Asia. The terrorism and conflict that lasted for nearly 30 years resulted in the economic downfall in my country.

Stability and prosperity will depend on the opportunities, political and development environment, giving prominence to the huge public demands, good governance and the psychological needs for freedom, and protection from adverse situations.

With a revolutionary change of governance, my government has succeeded in creating the path for viable development environment and for reconciliation in a multi-faceted society. Now, the people are free and respect human rights. I am aware how G7 countries have appreciated the change we created. This change was endorsed by the people in January and August 2015 in two elections. It exhibited peoples’ opposition to abuse, corruption, and many such ills, which are detrimental to stability and prosperity.

These slowed down capital inflows and investments, which are the mechanisms for stability and prosperity.

To create stability we formed a National Unity Government under my Presidency, combining the country’s two main rival political parties in the Parliament. Our government introduced the 19th Amendment to the Constitution through which I transferred to the Parliament most of my executive powers, except those denied by the Supreme Court. It is democracy at its best.

As a demonstration of my commitment to transparency, accountability and the rule of law, and my firm determination to wipe out corruption, I established a Special Presidential Task Force to investigate Stolen Government Assets, and appointed a Commission to Investigate Allegations of Bribery and Corruption and established a Special Division within the Police titled the Financial Crimes Investigation Division to investigate major financial crimes.

Corruption and discrimination were factors that promoted political violence, withdrew investments and created an unstable economy. Therefore, our actions will instill stability and prosperity.

In addition to disengaging executive powers, I re-established the Independent Commissions such as for the Public Service, Human Rights, Police, Elections, Delimitation and Finance.

To focus on reconciliation, as I mentioned at the UN General Assembly, we move forward to establish mechanisms for Truth Seeking, Justice Seeking, Reparation and actions for non-recurrence, based on extensive consultation with all sections.

We lack finances for extensive development efforts and therefore seek developed nations’ and multilateral and bi-lateral investors to invest in Sri Lanka.

Even as I speak to you today, Sri Lanka is recovering from one of the worst floods and landslides we ever experienced. Immediately several countries offered help in our rescue and reconstruction efforts. We thank them and look forward for more development commitments as the destruction is severe.

Therefore, I believe that the G7 Summit of 2016 will look at countries like ours focusing on all these fields.  Your invitation to me would yield real benefits beyond bounds, if serious attention is drawn to our problems.

Finally, while thanking the Organizers for the wonderful hospitality provided to me and my delegation, I wish the outcome of G7 Summit to be a great success.