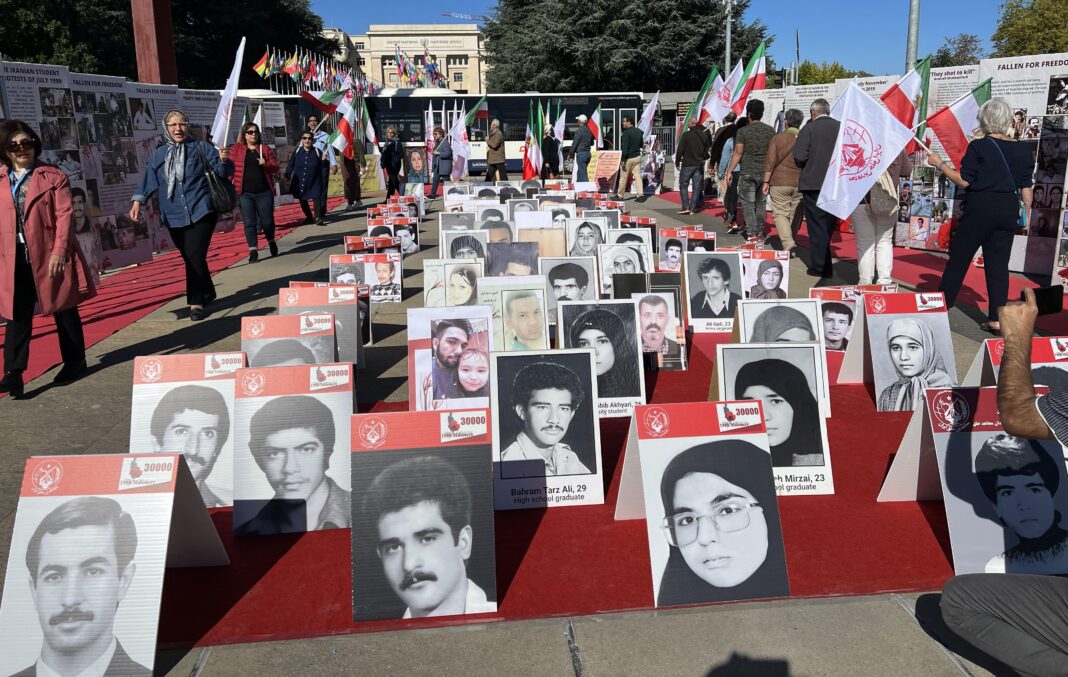 Image: From all over the world victims of human rights violations come to Geneva looking for answers.

The most striking thing in those consultations was when Sandya Ekneligoda, the wife of the disappeared journalist Prageeth Ekneligoda, recalled her travels to Geneva in search of justice for more than 10 years and queried the Government as to how many more years they were expecting her and others like her to come to Geneva. Sandya Ekneligoda was amongst the earliest families of the disappeared from Sri Lanka to start travelling to Geneva, but since then, many Sri Lankans have started taking their grievances and demands to Geneva.

Tamil families of the disappeared who have been engaged in an “aragalaya” (struggle) for more than 2,000 days, Dr. Kasipillai Manoharan whose son was killed on the Trincomalee beach in 2006, community leaders who have been struggling to reclaim land from military occupation, and activists subjected to frequent surveillance, harassments, assaults, and unjust arrests have been to Geneva in search of justice. Opposition MPs have also been going to Geneva, with former President and Prime Minister and incumbent MP Mahinda Rajapaksa and his ally, former Minister and incumbent MP Vasudeva Nanayakkara being two of the earliest Opposition MPs to go to Geneva to speak about human rights violations in Sri Lanka in the early 1990s.

Amongst those who went to Geneva for the first time last week was Shehan Malaka, a prominent Catholic youth activist advocating for truth and justice for the Easter Sunday attacks and who had been subjected to various reprisals, including being arrested. Another first-timer in Geneva last week was Attorney-at-Law Nuwan Bopage, a human rights lawyer who while being part of the “aragalaya”, had provided pro bono legal assistance to many arrested and summoned for questioning in relation to the “aragalaya”. Bopage had also been beaten and arrested when he tried to defend another person during the attack on a peaceful protest site in July.

Religious leaders, including at least one Buddhist monk and Christian clergy, have also been to Geneva. The most prominent religious leader to go to Geneva was Catholic Archbishop of Colombo Malcolm Cardinal Ranjith. Cardinal Ranjith met the UN High Commissioner for Human Rights (HCHR) in Geneva in March this year and also addressed the UNHRC, asking for support for the continuation of evidence-gathering initiated by the UNHRC last year (2021) and to devise a means to ensure an impartial investigation to unravel the truth behind the Easter Sunday massacre.

Ten years ago, in 2012, when a Tamil Catholic bishop and clergy had written to the UNHRC Member States and demanded international investigations into wartime atrocities, this same Cardinal Ranjith had “accused Western countries of meddling in Sri Lanka’s sovereignty by planning to table a resolution on Sri Lanka at the UNHRC” and said that this was “an insult to the intelligence” of Sri Lankans.

What is significant is that most of those mentioned above are those who have invested time, energy, and money in domestic processes, such as ad hoc Commissions of Inquiry (CoI), the Office on Missing Persons (OMP), the Human Rights Commission, the Police, and the Judiciary. They have also engaged with the local media, politicians, and State officials to seek truth and justice. Cardinal Ranjith is likely to have had a conversion in his heart about seeking international help to seek truth and justice, as he had realised, in just about two years after the Easter attacks, the difficulties in seeking truth and justice through purely domestic mechanisms.

This is a truth that the Tamil Catholic clergy, the families of the disappeared like Sandya Ekneligoda, and Tamils who have been protesting for more than 2,000 days had realised many years before. Essentially, it is the inability to get truth and justice in Sri Lanka despite many efforts, and the subsequent loss of confidence and hope in domestic processes, that drive many Sri Lankans to Geneva.

What does Geneva offer?

While their disappointment, anger, lack of hope and confidence in domestic processes, and reasons for going to Geneva and international engagement are understandable, what is less clear is what they have gained from the time, energy, and money invested in UN processes, such as the UNHRC.

I have been associated with many of the above efforts in Geneva, and over the years I realised that they all yearn to be heard. That is why it is important for the survivors of rights violations, a family of a victim, and a person from a war-affected community to have the chance to speak at the UN, formally at the UNHRC, as Cardinal Ranjith did in March and Bopage did last week, but also informally, as Sandya Ekneligoda did last week and many have done by speaking to diplomats and UN officials and even at other events in Geneva. I believe that Sandya Ekneligoda’s heartfelt comments at the tail end of the first consultation would have left a mark on diplomats in the room, including the Sri Lankans.

Despite the international politics that inevitably will prevail in inter-Governmental organisations like the UN, the sentiments, grievances, and demands of Sandya Ekneligoda and others like her are reflected in the reports of the OHCHR (and previous bodies like the Panel of Experts of the UN Secretary-General in 2010-2011) and to a lesser extent in the UNHRC resolutions. They present a narrative to the world that closely reflects the experiences and feelings of survivors, the victims’ families, and the affected communities and is very different to the narrative of the Sri Lankan Government.

For example, there were no clear references related to the Easter Sunday attacks in the OHCHR’s written update in March 2020 and the comprehensive report in March 2021, despite the attacks being the largest post-war massacre and allegations of this being a “grand political plot”. After some intensive lobbying by the Catholic clergy and lay activists, there was a small reference to this in the OHCHR’s oral update in September 2021 and a more detailed reference in the written update in the March 2022 report.

In the September 2022 comprehensive report of the OHCHR, a much stronger reference was included, including calls for the “full volumes of the Presidential CoI to be made publicly available” and “for a follow-up independent and transparent investigation with international assistance to pursue further lines of inquiry, with the full participation of the victims and their representatives”. Disappointingly, there is no reference to the lack of truth and justice in the Easter Sunday attacks in the draft resolution on Sri Lanka being negotiated currently, but this is also why those committed to advancing full truth and justice for the attacks continue to be engaged with the UNHRC.

To take another example, the draft resolution validated recent protests in Sri Lanka that overthrew the corrupt, racist, and authoritarian Rajapaksa regime (led by former Presidents Gotabaya Rajapaksa and Mahinda Rajapaksa) by emphasising that “peaceful protests can make a positive contribution to the development, strengthening, and effectiveness of democratic systems and to democratic processes, as well as to the rule of law” and that “participation in peaceful protests can be an important form of exercising the rights to the freedoms of peaceful assembly, of expression, and of association, and participation in the conduct of public affairs”. The draft resolution has also acknowledged “the importance of addressing underlying governance-related factors and root causes which have contributed to this present crisis, including deepening militarisation, the lack of accountability in governance, and impunity for serious human rights violations and abuses”.

UN resolutions and reports may also have contributed to setting up some domestic institutions such as the OMP, releasing some military-occupied lands, a few cases being filed against the military, Police, and prison officials for enforced disappearances and killings, and some other positive developments inside Sri Lanka towards reconciliation and accountability. Personally, I too believe that the many interventions at the UNHRC and internationally may have contributed to my relatively quick release when I was arrested in Kilinochchi in March 2014, under the Prevention of Terrorism (Temporary Provisions) Act (PTA), while the UNHRC sessions were going on in Geneva.

Though farfetched and ambitious, the evidence-gathering mechanism set up in 2021 may also contribute toward the freezing and recovery of stolen assets and prosecutions of public officials, politicians, and military personnel for wartime atrocities, the Easter Sunday massacre, economic crimes and corruption.

Are those going to Geneva traitors?

Those going to Geneva, including many of the above including me as well, have often been called traitors. When I was arrested by the Terrorism Investigation Division of the Police, I was questioned extensively about my visits to Geneva, and one of the three reasons given in the official arrest receipt was “sending information abroad”.

It is time for Sri Lankans to rethink and question the popular narrative of “resolution/report against the country” peddled by many politicians, the media, religious leaders, etc. A UN resolution or report could be critical of a Government, and may not be perfect, but based on the last few decades, they are not against the Sri Lankan people seeking truth and justice for their disappeared or murdered family members, and for other grievances.

Rather than demonising Sri Lankans going to Geneva seeking truth and justice, politicians, the media, religious leaders, professionals, artists, etc. should empathise with their grievances and extend solidarity towards their aspirations and struggles in the Sri Lankan streets, courts, the media as well as in international spaces like in Geneva.