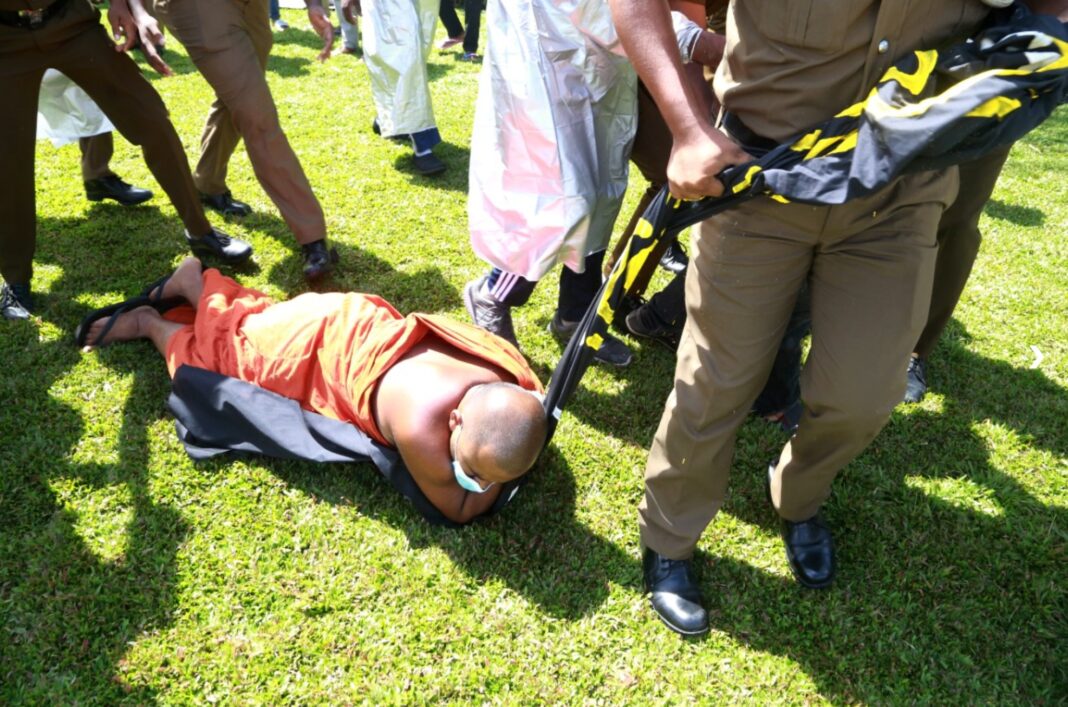 Image: Country witnessed how Buddhist monks were dragged away. Older women were treated in a very derogatory manner.

Today we as a country are moving in a very dark direction. The process of repression of the people has already begun. The country’s economy is going bankrupt. The existence of the people has become more precarious than ever. Today they are not even free to talk about the persecution they are suffering. The failure and incompetence of the government is being passed on to the people.

Will democracy survive in such a country? This is an extremely dangerous trend. A situation that must be defeated immediately. Otherwise, the future of this country could be even darker, tragic and scary.

Today this country has been reduced to a state where human freedoms are ignored. Instead of rescuing the people from the Corona epidemic, the government is suppressing the people by using it as a cover and blessing. The people must stand together and defeat this danger.

Police repression is being unleashed

The country’s Farmers are facing many problems. Working people have been left helpless, unable to make a living. The youth have lost any faith in the future. As a result, the people have taken to the streets against it. However, the rulers of this country are taking steps to repress the people instead of providing proper solutions to them. When any government in the world fails, it responds by repressing the people. Unfortunately, our country is in a similar situation today.

Disgraceful behaviour of the police

Farmers and their leaders who ask for fertilizer to cultivate are being forcibly taken away today. Students who come forward to protect the country’s free education are being arrested. Police repression is being unleashed on citizens who demand democracy.

We have seen many such situations recently. How is the government answering them? A Buddhist monk’s robe is highly revered in our culture. But in the images we witnessed how Buddhist monks were dragged away. Older women were treated in a very derogatory manner. A number of trade union leaders in this country were arrested. You may have seen how Mr. Joseph Stalin was forcibly taken away. It is disgraceful how the police even tore the young women’s clothes. Such a thing cannot happen in a free and democratic country. It is most serious because all these acts are being carried out illegally in defiance of the existing laws.

Police have no power to abuse the quarantine law

The police have the power to arrest a person on a criminal charge but it should be done in accordance with the law of the land. But what is happening today? It is even abusing the quarantine regulations issued by the Director of Health Services by using it to suppress the people’s right to speak instead of using it to control disease.

The police have no power to abuse the quarantine law. If a group released on bail by the court is once again arrested by the police on the court premises and taken away by force, it is nothing but an illegal abduction.

These events are taking place today in broad daylight, in front of a large crowd. In the honorable Courts of the country. If this situation continues to develop in this manner, even those standing before the judge may be abducted by the police.

Therefore, the legal community and the judiciary in this country should pay more attention to these events than anyone else. What use does a judicial system have for a country if the law is being blatantly attacked and court orders are being violated?

Time to stand up and fight

Will democracy survive in such a country? This is an extremely dangerous trend. A situation that must be defeated immediately. Otherwise, the future of this country could be even darker, tragic and scary. We believe that all responsible and caring people, including the citizens of this country, should understand that.

We believe that all responsible and caring people, including the citizens of this country, should understand that. Accordingly, we demand the immediate release of all trade unions and activists who have been forcibly detained outside court orders. People like Joseph Stalin are internationally respected trade union leaders.

We also need to understand that these events are not a coincidence in this country today. It is evident that this is a systematic repression according to a plan with the aim to eradicate democracy from this country. The end result is the overthrowing of the people’s sovereignty and the building of a dictatorial state.

Election Commission is being politicized

When we look at what is happening in the Election Commission of this country today, we foresee such a danger. When we look at the way democracy has developed in our country since independence, although there have been some shortcomings at times, the free electoral system has gradually become stronger.

People’s confidence in free elections was strengthened steadily. It was a blessing to the entire democratic world. But what is happening today? Especially after the passage of the 20th Amendment to the Constitution, the independence of the Election Commission has come under a deadly attack.

Democracy in our country could be lost. The freedom and rights of the people can become a mere dream. People’s sovereignty can be limited to the letters printed on the Constitution. This is a grave danger.

It began with the appointment of political stooges, including ruling party political activists and their office bearers, as members of the Election Commission. We have repeatedly pointed out the dangers. Unfortunately, even some political parties in this country do not seem to have paid enough attention to it.

We are deeply concerned about this. It needs immediate attention. The government has appointed political activists to many independent commissions. This is a very dangerous trend. As far as we know, a number of senior officials serving in the Election Commission are being transferred. What they are attempting is to expel experienced officials who have been committed to free elections and instead put the entire Election Commission in the hands of people who act according to their whims and fancies.

Ultimately this will lead to elections devoid of any freedom and fairness thereby creating an environment where the same group of people can remain in power forever. All political parties in this country that value democracy and election monitoring organizations that are committed to a free, peaceful and fair election process should pay close attention to these happenings.

Otherwise, democracy in our country could be lost. The freedom and rights of the people can become a mere dream. People’s sovereignty can be limited to the letters printed on the Constitution. This is a grave danger.

I urge all parties to direct their attention to these events for the sake of our people. All political forces in this country should shed all narrow objectives and unite against this. This is our appeal today. More importantly we also ask the government not to rob the people of their rights.