Frances Harrison
New photographs have emerged five years after the end of the civil war in Sri Lanka showing the aftermath of government attacks on a United Nations food distribution centre inside the war zone. The pictures, shot by a Tamil working for the media unit of the Liberation Tigers of Tamil Eelam (LTTE), show corpses, destroyed tents and damaged UN vehicles inside the “no fire zone” declared by the government supposedly to protect civilians. 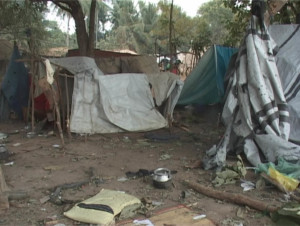 “When I arrived I saw a tent that had taken a direct hit from a shell and the nearby UN vehicle was covered in pieces of human flesh,” says the photographer, a refugee who now works in a newsagent shop in England. “People were screaming and crying, they’d lost their loved ones. They were really desperate; the Sri Lankan government told them to go to this area, saying it would be a ‘no fire zone’ but then they attacked this place crowded with families and fired artillery and multi-barrelled rocket launchers.” 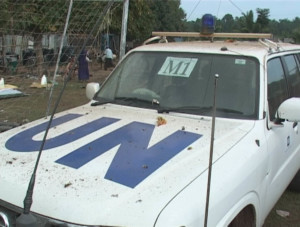 The photographs depict the aftermath of several attacks on the UN position in the early morning of 24th January 2009. What’s significant about this incident is that it is one of the few witnessed by international United Nations staff, who were lucky to escape with their lives. This attack came at a point in the final phase of the conflict where casualties started to rise alarmingly. According to later UN estimates, the death toll for civilians in 2009 may have reached between 40-70,000 in a matter of months, making it one of the bloodiest conflicts this century. 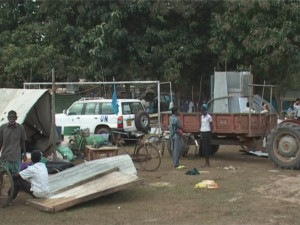 The UN team was allowed into the war zone in January 2009 only to deliver food to displaced people but as their convoy moved past the Forward Defence Line in to the LTTE areas they noticed Sri Lankan soldiers walking alongside their lorries, using them as cover to advance their forward positions. At that point they had no idea this would turn out to be the last delivery of food by road to hundreds of thousands of hungry destitute people trapped in the war zone for the next four months.
It was also the last chance to evacuate the Tamils who worked for the UN with their family members. The LTTE wouldn’t let them leave the war zone but the UN staff hoped to drive out with their colleagues. There were however bitter arguments among the expatriate staff about whether their mission included anything beyond food delivery. Some of the international staff were becoming hysterical, desperate to get out alive. Others felt they had a responsibility to stand by their local colleagues.
After unloading food, the UN convoy negotiated its departure route with both warring parties and started off with over a hundred Tamil staff and dependents packed into lorries. Before long the convoy was stopped at the Puthukkudiyiruppu junction by the Tamil Tiger police who tried to make the UN local staff and their families disembark.
A very tense stand off ensued, with eyewitnesses describing the Tiger police hitting the side of the lorries with their canes and hostile local people calling the Tamils in the lorries traitors for trying to escape. The LTTE had blocked the exits with pick up trucks with guns mounted on them and heavily armed cadres. Behind the convoy, the UN office was being overrun and ransacked by a large hungry crowd. UN staff made frantic satellite calls to headquarters.
The international staff working for the World Food Programme and UNICEF feared they’d never get out alive if they waited to negotiate the evacuation of the Tamil staff. In a panic they drove off leaving just four lorries and one light vehicle behind for more than a hundred local staff and dependents. The departing aid workers also took a key vehicle with extra communications equipment with them.
Only two of the UN international staff bravely decided to stay; it was an agonising moment but they felt it was their duty to help their local colleagues. Within minutes of the convoy driving off there was intense artillery fire – incoming and outgoing – all around them.
Directed by the Sri Lankan government, the remains of the UN convoy moved northwards to Uddayarkattu where the government had just declared a “no fire zone”. The road was so jammed with people fleeing that it took an hour to drive the four kilometres. Dead animals and wrecked vehicles lay strewn around in a scene straight out of something from the second world war. 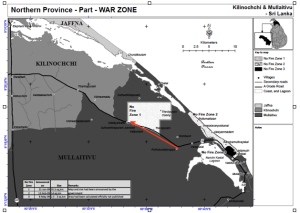 The UN staff set up camp in a playing field that had been converted into a food distribution centre. They took GPS readings of the perimeter of their positions, adding a 200 metre buffer zone for safety, and began to dig bunkers. The open space was densely packed with civilians who thought they’d be safe in the “no fire zone” next to the UN positions. 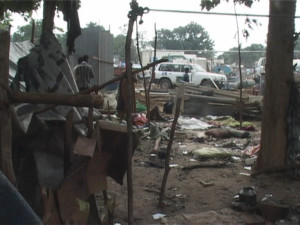 Overnight a massive government attack left at least 19 dead and 32 injured. Shells were landing just 60 metres from the GPS positions the UN had communicated to the Sri Lankan security forces just an hour before. 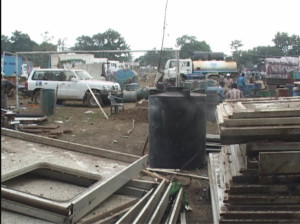 The UN staff caught up in the attack later wrote a report documenting the carnage they witnessed for the UN Humanitarian Coordinator, John Holmes (excerpts below published for the first time). They described the sight at first light when they emerged from their bunker as devastating. “The decapitated body of the 18yr old daughter we had spoken with earlier in the evening landed at the entrance to our bunker…1 dead infant was in a tree under which the family had sheltered and the 2nd decapitated infant was hanging from the wire perimeter fence,” they wrote. 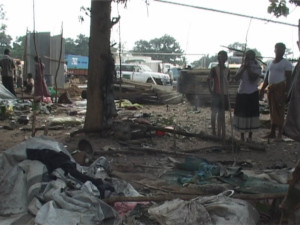 The United Nations however did not publicise these accounts. Its own staff had witnessed war crimes committed by the Sri Lankan government – the shelling of a designated humanitarian site – but instead UN diplomats tried to engage with the government in quiet diplomacy that failed to achieve anything.
The UN resident coordinator in Sri Lanka, Neil Buhne actually tried to blame the Tamil Tigers for the deaths from the government shelling. In a letter to the Sri Lankan Foreign Ministry while his staff were still inside the war zone, he said the attacks were “likely” in response to Tiger firing and argued that the rebels must bear the responsibility for the killing because they didn’t allow civilians out of the war zone. 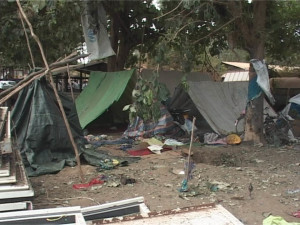 A UN Internal Inquiry in 2012 did later conclude that the organisation had gravely failed in Sri Lanka, sadly not learning the lessons from Rwanda. As a result of that admission a new UN initiative has been set up called Rights Up Front to make sure the protection of civilians is always paramount.
Human rights activists who follow Sri Lanka question whether the UN has really applied these lessons to its continued involvement in the country. “The UN’s failure in Sri Lanka may have inspired the Rights Up Front initiative but the UN agencies still don’t speak out strongly about appalling repression and ongoing human rights abuses – it’s as if nothing has changed five years on,” said Fred Carver of Sri Lanka Campaign.
EXCERPTS FROM UN REPORT
24/01/09
0300 – 0400 hrs
5 mortar shells fired from the SE landed in our immediate vicinity killing at least 2 families 8m from our bunker
7 dead 15 injured
The decapitated body of the 18yr old daughter we had spoken with earlier in the evening landed at the entrance to our bunker
One WFP Driver was hit in the back of the head with shrapnel and was taken by motorcycle to the hospital
0400 – 0800 hrs
The incoming mortar fire continued to land inside the No Fire Zone some as close as 100m from our location until morning
The scene at first light was devastating; within 20m of our location lay 7 dead & 15 seriously injured
1 dead infant was in a tree under which the family had sheltered and the 2nd decapitated infant was hanging from the wire perimeter fence along the Udaiyaarkaddu Suthanthirapuram Junction
The UNDSS vehicle parked 15m away was covered with body parts from the two families
Reports began to emerge of deaths & injuries from other areas of the GA Food Distribution Center and surrounding areas
The staff continued work on finishing the remaining bunkers however progress was slow several laborers from the day before had been killed in the previous nights shelling
Many other laborers had left the area due to the ongoing artillery attacks
1000 – 1700 hrs
Continuous incoming artillery & mortar fire from the South & SE some landing within the field designated for the GA Food Distribution Center
Artillery & mortar fire from the South & SE pass over us landing north up to 2 – 3 km inside the No Fire Zone
Smoke could be seen rising from the trees directly north of our position immediately after the attacks
Sporadic outgoing artillery & mortar fire from within 2000m of our location
UNDSS Colombo & Vavuniya were continually updated with information regarding the attacks throughout the day however the artillery barrage continued unabated
Work on the bunkers progresses slowly due to continued interruption by incoming heavy weapons fire.
Frances Harrison: Ex-BBC Correspondent, Ex-Amnesty International, Journalist & Author of ‘Still Counting the Dead’ – book on Tamils who survived Sri Lanka’s 2009 war