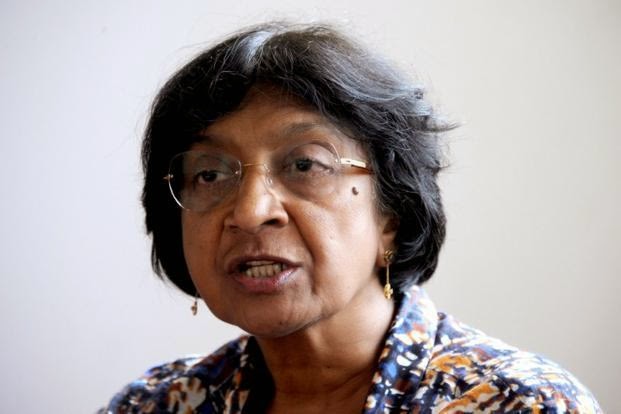 HC opening statement on 26th March 2014 at HRC 25:
I am pleased to introduce to the present session of the Council the report of the Office of the United Nations High Commissioner for Human Rights on promoting reconciliation and accountability in Sri Lanka (A/HRC/25/23).  The report examines the progress the Government has made in implementing the recommendations of its Lessons Learnt and Reconciliation Commission (LLRC), as well as those I formulated in my report which were endorsed by the Council in March 2013, and following my visit to the country in August 2013.
The update to the 24th session of the Council reported progress in reconstruction and resettlement of internally displaced persons, elections to the Northern Provincial Council, and in implementing some LLRC recommendations, such as giving effect to the trilingual policy.
We regret to report that there has been little progress in other critical areas identified by the Council in resolution 22/1 and by the LLRC, notably the need to ensure independent and credible investigations into past violations of international human rights and humanitarian law.
The Government of Sri Lanka has not responded positively to OHCHR’s repeated offers of technical assistance on specific elements that could advance the accountability and reconciliation agenda. While welcoming the visit by the Special Rapporteur on Internally Displaced Persons and invitations extended to the special procedures dealing with education and migrants, we encourage the Government to invite other relevant mandate-holders.

We are also disturbed by the continued harassment and intimidation targeting human rights defenders in Sri Lanka, even while this session has been underway, including the detention last week of two prominent NGO activists undertaking human rights work. We welcome their release. We are, however, concerned at their continued surveillance and the restrictions under which they have been placed.

Almost five years since the end of the conflict, it is important for the Human Rights Council to recall the magnitude and gravity of the violations alleged to have been committed at that time by the Government and the LTTE, which left thousands of civilians killed, injured or missing. Failure to address the grief and trauma among victims and survivors undermines confidence in the State and reconciliation.
In recent years, the Government has established various mechanisms with the task to investigate past violations. But none have had the independence to be effective or inspire confidence among victims and witnesses.

At the same time, new evidence continues to emerge, and witnesses are willing to come forward to testify before international mechanisms in which they have confidence and which can guarantee their protection.

This shows that an international inquiry is not only warranted, but also possible, and can play a positive role in eliciting new information and establishing the truth where domestic inquiry mechanisms have failed. We are thus recommending the Council to establish an independent international inquiry mechanism to further investigate the alleged violations of international human rights and humanitarian law and monitor domestic processes. This is essential to advance the right to truth for all in Sri Lanka and create further opportunities for justice, accountability and redress.
Finally, the report before you also provides an overview on recent human rights developments in the country, including attacks on religious minorities and human rights defenders, and on freedom of opinion and expression.

This concludes my introduction of my Sri Lanka report.

Thank you for your attention.