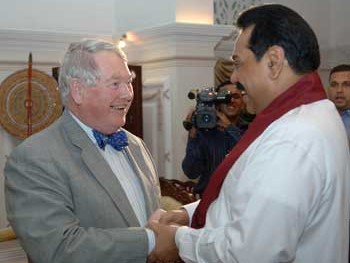 At the end of last year, the Sri Lanka Campaign published a critique of an intervention in the House of Lords by Lord Naseby. In that intervention, Lord Naseby sought to discredit prevailing UN accounts about the nature and extent of atrocities committed during the final stages of the civil war in Sri Lanka, and urged members of the international community to row back pressure on bringing perpetrators to justice.[1]These arguments were based on what he referred to as “real gems” of fresh evidence contained in 39-pages of war-time diplomatic despatches from UK Military Attaché Colonel Anton Gash, obtained through a Freedom of Information request to the UK Foreign Office.

Prior to the publication of our critique, the Sri Lanka Campaign made multiple written requests to Lord Naseby to share the entirety of the despatches with us, in order that we could properly verify and scrutinise the limited extracts that he had disclosed in Parliament. Those requests were repeatedly refused, amid a series of evasive and at times farcical responses.

Initially the Sri Lanka Campaign was told that we should try and locate the documents online, despite the fact that they had not been published to the web by the FCO or anyone else. Then we were told that the files were in hard-copy only, and that since Lord Naseby did not have a personal secretary, it would not be possible for us to receive duplicates or an electronic version. Our offer to meet Lord Naseby in person so that we could scan the documents for him was flatly ignored.

Later, we made multiple requests for the release of the despatches to the head of a UK-based advocacy group, named by Naseby in Parliament as having assisted his FOI request and engaged in circulating press releases from Naseby’s office to Sri Lankan journalists.[2] Those too were not taken up, and it was again suggested that we contact the FCO.

One of our colleagues did just that, and earlier this year we received the documents in full.

Their contents make clear why those in possession of them may have been so unwilling to release them: they expose many of the citations provided by Naseby in the House of Lords as both selective and misrepresentative of the source material. We are pleased to finally be able to publish the despatches here, along with some (non-exhaustive) analysis below. [3]

In our critique of Naseby’s statement to the House of Lords, we began by taking issue with the following quote from the despatches on the issue of civilian casualty figures:

We speculated that this figure did not derive from any independent assessment by Gash, but rather was an estimate that had been produced by the UN Country Team (UNCT) in Sri Lanka. The full email excerpt from the despatches (below) finally confirms this. As we pointed out in our earlier piece, the casualty figures cited by Naseby do not therefore represent a new and independent source of information, as appears to have been implied by him in Parliament.

Indeed, the figure of 6,432 had even been published in the Guardian newspaper on 24 April 2009, two days before Gash’s email.

Later, in 2011, the UNCT civilian casualty figures were evaluated on their own merits by a UN Panel of Experts. Highlighting the “quite conservative” nature of the methodology deployed,[4] the Panel concluded UNCT’s subsequent figure of 7,721[5]as “likely to be too low,” stating that, “in reality, the total number could easily be several times that of the United Nations figure.” The report went on to conclude that “a range of up to 40,000 civilian deaths cannot be ruled out at this stage.”[6]

This is consistent with subsequent post-war evidence about the intense nature of the violence that occurred during the very final weeks of the war, with eyewitness accounts attesting to much higher rates of death, and which itself made gathering accurate reports more difficult.[7] Notwithstanding the concerns around the methodology behind the UNCT figures, this is something which Naseby’s total of 6,432 from 26th April – with more than three weeks of ferocious fighting still to go before the war’s end – fails to account for entirely.[8]

At no point in the despatches is any precise independent estimate of civilian casualties, covering the whole period of the war, ventured by Gash.[9] Indeed, at several points the despatches reveal just how reluctant he was to offer an assessment. For example, writing on 6 February 2009 – more than three months prior to the war’s end – he wrote:

Therefore, the argument – made by Naseby and many of those who have endorsed his intervention – that the despatches offer the new and concrete evidence that should prompt us to radically revise prevailing UN estimates of the scale of civilian casualties is nonsensical. The figures in the Gash despatches must be read as what they really are: as based on second-hand, partial and uncertain information, the gaps in which have largely been filled in the 9 years that the UNCT data has been in the public domain.

Another issue we raised in our critique concerned this quote from the despatches provided by Naseby:

We argued that the principal problem with this small excerpt, so provided, was its failure to mention, much less engage with, the credible evidence from various sources – including UN experts and NGO whistle-blowers – suggesting that cluster munitions may have in fact have been used against civilians during the war.

But an analysis of the despatches reveals something even more troubling about Naseby’s presentation of the quote from Gash. On any reasonable interpretation of Naseby’s statement to the House of Lords, an individual would rightly conclude that the phrase quoted from Gash represented the independent assessment of the Military Attaché himself. The truth, however, is quite different.

A closer inspection of the despatches reveals that the quote was not the Military Attaché’s own observation, but rather that of another person altogether: Sri Lanka’s Defence Secretary Gotabaya Rajapaksa.

While it barely requires saying that the Sri Lankan Defence Secretary, an alleged perpetrator of serious human rights violations, is not a credible authority on whether cluster munitions were used by the Sri Lankan armed forces – it is worth highlighting the fact that at no point does the Military Attaché actually endorse his statement. Gash merely reports as fact that the statement has been made; not that the contents of the statement are factual. Whether Naseby’s presentation of the despatches constitutes an accidental, negligent, or wilful misrepresentation of the evidence, we leave it to readers to form their own opinions.

Why does this all matter?

For many Sri Lanka watchers familiar with Naseby’s long-standing support[10] for members of the Rajapaksa regime – and his consistent opposition to a credible mechanism to investigate human rights violations allegedly committed by them – the exposure of his “real gems” of evidence as selective and misrepresentative of the source material may come as no surprise. Equally, the publication of full despatches here is unlikely to change the minds of those who have already chosen to embrace his claims whilst closing their eyes to credibly established accounts of how Sri Lanka’s civil war ended.

But Naseby’s recent attempt to re-mould widely accepted truths lies at the heart of a growing constellation of forces and actors currently seeking to ensure that no one responsible for atrocity crimes in Sri Lanka is brought to book. It is a constellation that now includes many senior figures in the current regime, including the President himself, as well as influential figures in the Sri Lankan press. Unopposed, the risk is that the revisionism they peddle ends up hollowing out, or completely undoing, the promised agenda for dealing with the legacy of mass atrocities in Sri Lanka – an agenda that is already seriously struggling, as our recent research shows.

Members of the international community have a vital role to play in stopping this from happening. But unless they stand with war survivors – by acknowledging much more vocally the crimes committed at the end of the war, and the need to bring perpetrators before credible trials – they stand little chance. If they fail to speak the truth about what happened to civilians during the final stages of the war, others will surely succeed in filling the silence with noise.

A final point remains. What ongoing debate around ‘best estimates’ tend to obscure is the fact that the government has both the information and authority needed to form a true picture about how many civilians were killed during the war and the nature of their deaths. In addition to establishing the pledged institutions – including a Special Court and a Truth Commission – capable of doing this, the government could begin by conducting a proper demographic survey of war-affected areas and ensuring the release of relevant population records taken from 2006 onwards.[11] The continued failure to take even these most basic of steps represents a shocking lack of concern on the part of the state for the fate of so many of its citizens. Whatever the true scale and nature of civilian deaths, the very fact that there is still a debate is a stain on Sri Lanka’s international reputation.

[1] “I hope and pray that, as a result of this debate, the UK will recognise the truth that no one in the Sri Lankan Government ever wanted to kill Tamil civilians. Furthermore, the UK must now get the UN and the UNHCR in Geneva to accept a civilian casualty level of 7,000 to 8,000, not 40,000. On top of that, the UK must recognise that this was a war against terrorism, so the rules of engagement are based on international humanitarian law, not the European Convention on Human Rights. The West, and in particular the US and UK, must remove the threat of war crimes and foreign judges that overhangs and overshadows all Sri Lankans, especially their leaders.” Lord Naseby, Hansard, 12 October 2017.

[2] As confirmed in emails shared with us.

[3] The files released to us included nine separate PDF documents, containing multiple emails arranged non-chronologically and in some cases in duplicate. In order to make them more accessible, we have split the documents into separate files, corresponding to individual email chains and documents, and arranged them chronologically in this online folder. An index of the re-organised folder can be read here. In the interests of transparency, a folder containing the original files can be accessed here.

[4] “In early February 2009, the United Nations started a process of compiling casualty figures, although efforts were hindered by lack of access … In order to calculate a total casualty figure, the [Crisis Operations Group] took figures from the RDHS [Regional Directors of Health Services] as the baseline, using reports from national staff of the United Nations and NGOs, inside the Vanni, the ICRC, religious authorities and other sources to cross-check and verify the baseline. The methodology was quite conservative: if an incident could not be verified by three sources or could have been double-counted, it was dismissed. Figures emanating from sources that could be perceived as biased, such as Tamil Net, were dismissed, as were Government sources outside the Vanni. […] The number calculated by the United Nations Country Team provides a starting point, but is likely to be too low, for several reasons. First, it only accounts for the casualties that were actually observed by the networks of observers who were operational in LTTE-controlled areas. Many casualties may not have been observed at all. Second, after the United Nations stopped counting on 13 May, the number of civilian casualties likely grew rapidly. Due to the intensity of the shelling, many civilians were left where they died and were never registered, brought to a hospital or even buried.” Report of the [UN] Secretary-General’s Panel of Experts on Accountability in Sri Lanka, 31 March 2011 [emphasis added].

[6] In 2012, a UN report concluded that there was “credible information indicating that over 70,000 people are unaccounted for”. Leaked World Bank population statistics suggest that the figure could be over 100,000.

[9] Or, at least, any unredacted estimate.

[10] See footnote 3 within the hyperlink.

[11] Including, for example, those collected by the Grama Niladhari Administrative Divisions and the Divisional Secretariats