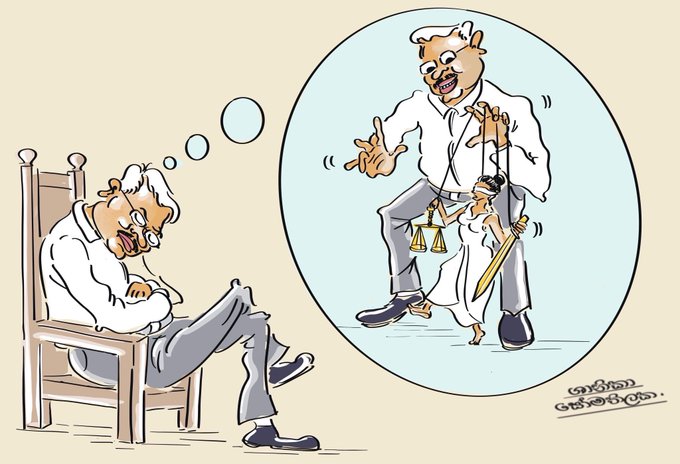 Sri Lanka’s floating voters, struggling to find their feet in the unpromising pandemonium of November’s Presidential elections, can only flinch from ‘Pohottuwa’ Presidential candidate Gotabaya Rajapaksa’s promise at his inaugural campaign rally following nominations in Anuradhapura on Wednesday, that he would free all ‘war heroes’ held in custody on ‘bogus charges’ the day after he is elected at President.

Who determines these ‘bogus’ charges?

‘Pohottuwa’ political propagandists, onetime Professor of law GL Peiris and onetime Chief Justice Sarath N Silva may no doubt be able to properly educate their candidate on what Presidents can and cannot do.  This may amount to time better spent than appearing on political platforms spouting about the ruination of the Rule of Law under the ‘yahapalanaya’ Government. The monumental hypocrisy of such proclamations, given the record of utter lack of governance during the Rajapaksa-led decade, must be deplored at the outset.

But the bigger question is this. Who determines ‘bogus’ charges, war heroes or not? The flamboyance with which these claims are made speaks to the worrying point that the Rajapaksas have learnt nothing whatsoever from being taught a deserving electoral lesson in 2015 when they were tossed out from political power. During their time, not only was a Chief Justice (Shirani Bandaranayake) ejected from office after a sham impeachment but also, judges were given phone calls and instructed to deliver court rulings, the Secretary of the Judicial Service Commission (JSC) was assaulted in broad daylight and the Attorney General of the day spent more time in the residences of the former President and his brothers than he did at Hulftsdorp.

Indeed, Solicitor Generals (past and present) who hold forth on being arm-twisted by Ministers to file cases against the Rajapaksas may be urged to come clean with all the gory details of far worse atrocities that occurred during that time. It must also be said that, despite all that alleged arm-twisting, very few cases were in fact, successfully filed to bring the former President and members of his family to justice. In contrast, the subversion of the law that occurred during the Rajapaksa decade was carried out very effectively.

Much of these details did not become a matter of proved public record only because of the Government’s own failures. Quite apart from the stuttering prosecutions against the Rajapaksas, aided and abetted in by some state law officers, ‘yahapalanaya’ short circuited itself by resorting to self–defeating ‘quick fixes’. One obvious illustration was the sending home of the Rajapaksa Chief Justice Mohan Peiris by Presidential letter, as advised by UNP lawyers and civil society cheerleaders without resorting to proper impeachment procedure.

At the time, this was justified on political expediency and on the basis that this Chief Justice had never ‘sat’ on the Bench as his immediate predecessor Shirani Bandaranayake had not been properly impeached. As predicted at the time in these column spaces, that mistake was bound to haunt the ‘yahapalanaya’ regime.

The fact remains that a due and proper impeachment process would have set on record, the enormous subversion of the law that had occurred then. It would have deprived any hypocrite of the chance to ever brush aside those happenings as ‘unproved’ or ‘frivolous allegations as we see now. Most importantly it would not have set a precedent that we have reason to fear even as the country faces a turbulent and unstable political environment.

Then as now when we hear the ‘Pohottuwa’ presidential candidate promising to ‘release’ war heroes held on ‘bogus’ charges, the same question is in issue. Who determines if a ‘war hero’ ought to be released or if a Chief Justice had properly’ sat in his/her office or not? Politicians, civil society or the judiciary? These are good lessons to absorb in retrospect as the ‘yahapalanaya’ dream dissolves and the national effort is to prevent that from turning into a nightmare.

So do the choices in front of us hover betweeneffectively deadly manipulation of the law by the Rajapaksas or chaotic handling of legal and judicial institutions by the United National Party-led alliance fronting Sajith Premadasa as its candidate? Even so, let it be said that while it is one thing to accept penitent Rajapaksa leadership, conscious of the deep mistakes that it had made and contritely promising to reform, it is yet another to welcome that leadership back in all its grotesquely full flown defiance of the Constitution and the Rule of Law.

Rejecting a major cancer in the body politic

This must be resisted with force. There is little mistaking as to what a Rajapaksa-return will amount to. The recent spewing of racist invective against Muslims by a senior party leader of a constituent partner of the ‘Pohottuwa’-led alliance shows that in no uncertain terms.

The fact that this worthy later stepped down from all party positions is no reassurance. This is a temporary measure, meant to calm the public outcry that followed. And is this all the punishment that should follow hate speech?

The contradiction is stark.While a short story writer is arrested and prosecuted for inciting racial hatred under Sri Lanka’s International Covenant on Civil and Political Rights(ICCPR) for critiquing sexual abuse of minors in Buddhist temples, communalist politicians who directly engage in denigration of the minorities are left untouched. This is the contradiction that a Rajapaksa regime promises to aggravate on the one hand while, on the other, ‘yahapalanaya’ politicians appear to be deaf, dumb and blind to the law being applied so unequally.

There is a major cancer in Sri Lanka’s body politic that must be treated and extracted forthwith. This is the blind assumption of the country’s main political parties that they can spout the same rubbish each time around when the electoral race starts and be taken seriously. The well strategized rally of the UNP-led alliance held the day after the ‘Pohottuwa’ campaign certainly upped the odds in terms of playing the ‘Pohottuwa’ at its own game of subverted Sinhala Buddhist championship of ‘war heroes.’

A reform agenda that is genuinely local

That said, the beating of the drum re the imprisonment of former Army Commander Sarath Fonseka out of Rajapaksa rage is an old refrain, as riveting as this still may be. And there is peculiar obscenity in UNP seniors talking about the death and assaults of editors and senior journalists with such panache while glibly ignoring their failure to ensure a reckoning. . These are not failures that can be forgotten so easily.

The UNPs led alliance Presidential candidate Sajith Premadasa must go beyond bland promises to respect the ‘independence of the judiciary’ and address systemic failures in that regard if he is to be taken seriously.

Sri Lanka deserves a long and hard look at why impunity is so deeply ingrained in our policies, institutions and processes.  The reform agenda must start there, not be dictated by international real politik in Geneva or New York or the vagaries of corrupt and compromised politicians, Tamil, Sinhala or Muslim. This is where ‘yahapalanaya’ failed.

Hopefully that failure can set right now, if the fates are so gracious.