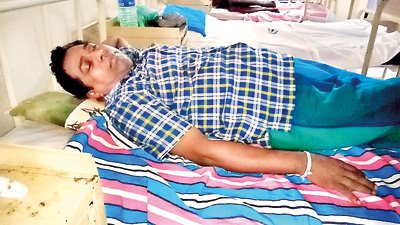 Image: A journalist attached to the Lankadeepa newspaper and his family were attacked by a group of men.

Sri Lankan President Gotabaya Rajapaksa on Thursday assured that media freedom will not be hindered in any form during his tenure, according to a statement from his office.

Addressing heads of local media institutions, he said that while there was an opportunity for “reasonable criticism”, he expected every media institution to fulfil its obligation towards the country, by “engaging in favourable media reporting” to uphold the country’s reputation.

The statement quoted him as saying: “People of this country elected me to the office of the President with great expectations. Enhancing the efficiency of politicians and public officials, elimination of corruption and the economic development are some of the priorities among them. As such I expect the fullest support and cooperation of media towards achieving these objectives.”

His assurance comes amid concerns among sections over media freedom in Sri Lanka after the November presidential election. Several journalists and dissidents in Sri Lanka have been targeted in the past.

According to international press freedom advocate Reporters Without Borders (RSF), at least 14 journalists were murdered during the 2005-15, when Mahinda Rajapaksa was President.

In 2017, when the Criminal Investigations Department (CID) told a magistrate court in Colombo about “top-secret death squads” reportedly linked to the defence establishment, Mr. Gotabaya, a former Defence Secretary, squarely denied the charges. The CID’s submission pertained to the assassination of well-known newspaper editor Lasantha Wickrematunga, in January 2009. In the last month, at least one news website was raided, while two other online journalists were “questioned”. An editor of a Vavuniya-based Tamil newspaper was also questioned in November allegedly over publication of “LTTE-related” photographs, local media reported. Last weekend, the Sunday Times reported that a journalist attached to the Lankadeepa newspaper and his family were attacked by a group of men, who demanded that he stop reporting on an allegedly illegal toddy racket.

“No doubt that there is a big fear factor now,” said senior journalist and commentator Victor Ivan, a former editor of Sinhala weekly newspaper Ravaya. “A lot of journalists who merely covered and followed issues as part of their job now they feel threatened under the new government,” he told The Hindu, adding that the previous government, “although foolish”, was “relatively much better” for media freedom.

“Gotabaya Rajapaksa is president now and has immunity that comes with Presidency,” he remarked. Observing that the opposition had “gone silent”, Mr. Ivan said: “They are so weak and don’t want to lend their voice. The biggest question now is who will stand by journalists, dissidents and civil society