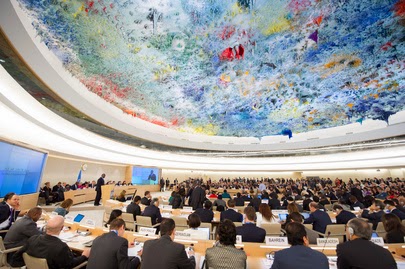 A statement from the International Commission of Jurists ( ICJ) forwarded by the Asian Human Rights Commission
UN investigation offers hope to victims in Sri Lanka The UN Human Rights Council resolution to establish an international investigation into allegations of human rights violations and abuses committed by both sides in Sri Lanka’s civil war gives hope to tens of thousands of victims who continue to be denied truth and justice, the International Commission of Jurists said today.
“The resolution sends a strong message to the Government of Sri Lanka that the international community is not willing to turn its back on victims’ pursuit of truth, justice and accountability in Sri Lanka,” said Sheila Varadan, ICJ South Asia Programme Legal Advisor.
The resolution is the third resolution adopted by the Council on Sri Lanka since 2012.
The previous two called on the Government of Sri Lanka to undertake an independent and credible national investigation into allegations of violations of international human rights law and international humanitarian law.
But almost five years after the end of the civil war, no one has been held accountable for gross human rights violations and abuses or serious violations of international humanitarian law.
The failure at the national level contributed to the decision of the Council to mandate the Office of the High Commissioner for Human Rights to organize an international investigation on behalf of the UN.
“Not only has the Government of Sri Lanka failed to deliver on its repeated promises to ensure accountability, it has actively dismantled the very institutions that could have delivered truth, justice and remedy for such rights violations and abuses,” said Varadan. “The judiciary has been effectively decapitated, and lawyers and judges continue to face intimidation, harassment and threats.”
During negotiations among States on the resolution earlier in the Council session, the ICJ warned diplomats that the Sri Lankan judiciary could no longer be relied upon to function as an impartial and independent institution.
Its judicial appointment process has become highly politicized; judges and lawyers have been subjected to threats, intimidation and physical violence; and the absence of an independent, impartial and fair removal and discipline process has left judges vulnerable to politically motivated attacks.
“Without an impartial and independent judiciary, it is simply not possible to have a credible independent and impartial investigation at the national level, no matter what the Government says,’’ added Varadan.
The need for such a resolution is further underscored by the recent and alarming campaign of reprisals against human rights defenders, victims and their families, and lawyers. Over the course of the Council session, human rights defenders have been arbitrarily detained and interrogated under abusively invoked counterterrorism laws; victims and their families have been intimidated and harassed; and lawyers have been targeted in media campaigns inciting public violence.
While the resolution did not fully respond to calls from civil society for the Council directly to establish an international Commission of Inquiry, an investigation led by the Office of the High Commissioner for Human Rights has the potential to deliver similarly powerful findings, particularly if the Office fully exercises its mandate to draw on the assistance of independent experts and special procedures with a focus on ensuring accountability, truth and justice.
CONTACT:
Sheila Varadan, ICJ Legal Advisor, South Asia Programme (Bangkok), t:
+66 857200723