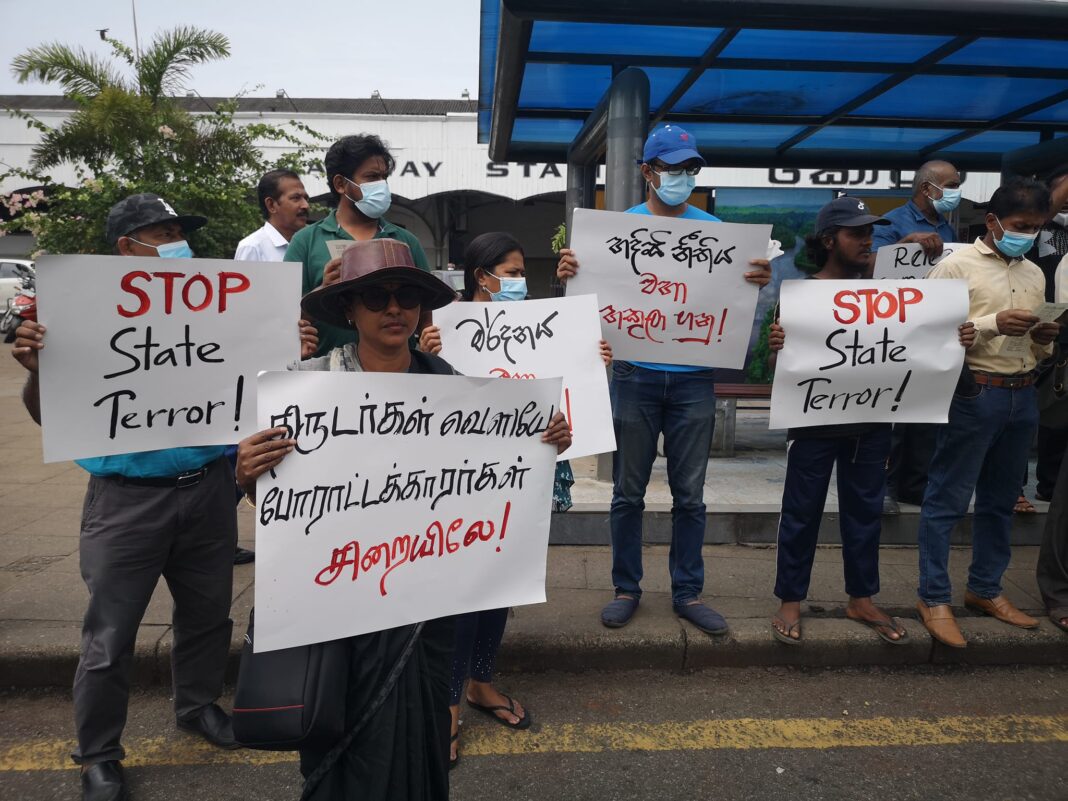 GENEVA (8 August 2022) – UN human rights experts* today condemned the extensive, prolonged and repeated use of state of emergency measures since 2 April 2022 by Sri Lankan authorities to crackdown on peaceful protesters and prevent them from voicing their grievances amidst an economic collapse in the country.

On 15 July, President Gotabaya Rajapaksa resigned and left the country following months of mass protests in the capital Colombo and across the island nation. His successor President Ranil Wickremesinghe declared another state of emergency on 17 July 2022, vowing to take a tough line against “trouble-makers”. The Sri Lankan Parliament has since ratified an ordinance on 27 July 2022 extending the current state of emergency for another month, imposing a curfew, and granting broad and discretionary powers to security forces and the military. Such powers allow them to detain protesters and search private properties without judicial supervision.

“We have raised our concerns to the Government on a number of occasions over the misuse of emergency measures, but to no avail. We condemn the recent and continued abuse of such measures to infringe on the legitimate exercise of the rights to freedom of peaceful assembly and expression,” the experts said.

Given the long-standing abuse of emergency powers in Sri Lanka, documented by United Nations human rights experts over many years, the experts raised particular concern about the impact of such powers on the exercise of a range of human rights, and reports of the targeting of vulnerable and minority groups under this state of emergency. They also highlighted that the procedural requirements to exercise the use of emergency powers under international law were not met.

Since March 2022, thousands have joined protests in Colombo and across the country to express their discontent with the Government over its handling of the grave economic crisis Sri Lanka is facing. The mass protests garnered momentum, in response to the deepening economic crisis, allegations of corruption, rising inflation, shortages of fuel and essential goods and prolonged power cuts as well as a failure to properly manage illicit financial flows.

“In the wake of an unprecedented economic crisis in which families sometimes have to choose between food and medicine, these repressive measures further close avenues for dialogue and maintain a political climate prone to an escalation of tensions,” the experts said.

Security forces have used the extensive powers granted to them by the emergency measures to violently repress the protest movement, including through the use of live ammunition, teargas and water cannons. On 22 July 2022, a joint operation of the police and military reportedly raided a protesters’ camp at Galle Face in the capital Colombo, tearing down tents, injuring over 50 and arresting dozens, including several journalists and lawyers. In recent weeks, Police have made a spate of arrests that appear to target individuals involved in organising the demonstrations and raided the homes and offices of protesters and opposition political parties.

“Limitations to the right to freely assemble must be applied only in exceptional circumstances and strictly according to the law. National security cannot be used as a pretext to shut down expressions of dissent, and detention purely due to peaceful exercise of rights is arbitrary. We wish to recall that protesters, including civil society representatives, journalists and human rights defenders, should be protected in the context of peaceful protests and not face criminal liability for their participation,” the UN experts said.

“We urge the Government to halt its repeated use of emergency measures and instead seek an open and genuine dialogue with Sri Lankans on political and economic reforms to reduce the impact of the economic crisis,” they said.