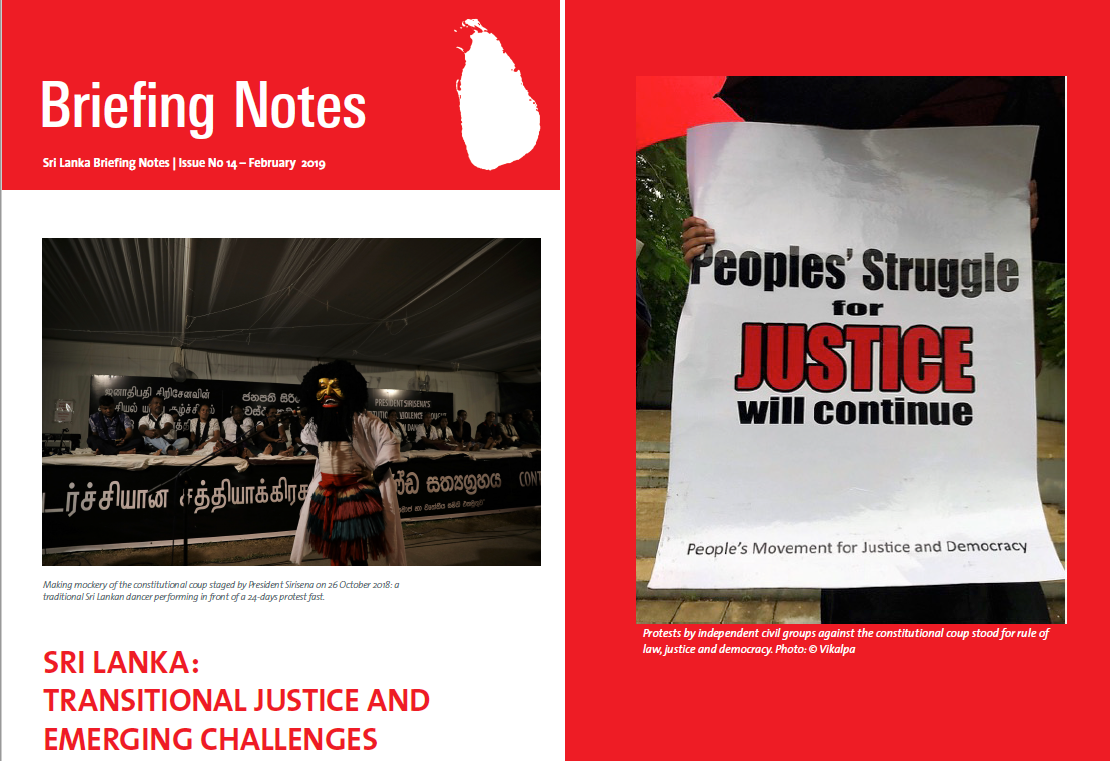 In the last two months of 2018, Sri Lanka witnessed a political coup led by its President. The coup was short lived. The attempt to overthrow the democratically elected Government and bring back the authoritarian ruler, who was rejected by the people in the last Presidential election, has implications on transitional justice and reconciliation in Sri Lanka.

Despite several positive developments, the progress of the transitional justice process has been slow, inconsistent, fragmented, and delayed. The Government’s genuineness of political will for transitional justice remains highly questionable. The war hero rhetoric that is being continued, mainly by President Sirisena, points to the fact that impunity for alleged war crimes as well as for attacks against human rights defenders and journalists will be prolonged.

While the investigations over killings and disappearances of human rights defenders and journalists stagnate with no real progress, tens of thousands of people remain disappeared. The Government continues to hold some of the civilian land acquired during the war and the displaced people continue their struggle to re-gain their land.

The process Constitution making process has come to a complete standstill and thus, finding a political solution to the ethnic issue has become an illusion. The country remains polarized along ethnic lines amidst growing Islamophobia. Sections of the political, social, and religious forces continue to take up extremist and non-negotiable positions.

Among the war affected communities, poverty is prevalent. Economic justice remains one of the least addressed issues. In general, the economy is stagnating.

2019 will be a crucial year for Sri Lankan politics: while the current Government is failing to implement the commitments under Resolution A/HRC/30/1, political forces that oppose the Transitional Justice (TJ) process are attempting to come into power – and this threat is real.

A re-energised civil society activism on the ground as well as in the social media remains a sliver line among these dark clouds. Checks and balances introduced by the 19th Amendment in the form of Independent Commissions continue to be a source of strength for rights-based activism.

Under these circumstances, the critical and continued engagement of the international community with the Government of Sri Lanka (GoSL) is of utmost importance. The continuation of a UN oversight of the implementation of the TJ process remains pivotal.

2. Constitutional Coup and its Political Implications

5.2. Continued impunity for attacks on journalists and human rights defenders