Sri Lanka to Recognise Around 65,000 People Missing Since Civil War as Dead 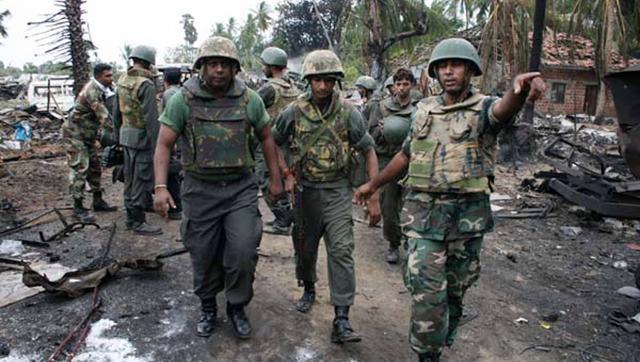 In this handout photograph received from the Sri Lankan Ministry of Defence on May 18, 2009, government soldiers inspect the area inside the war zone near Mullaittivu on May 17, 2009, when they helped evacuated the last of the Tamil civilians from the area. (AFP file photo)

Sri Lanka on Tuesday announced a landmark law to recognise as dead an estimated 65,000 people still missing seven years after the end of a bitter civil war, allowing relatives to claim inheritances.

Ministers approved a draft bill to issue “certificates of absence” to the families of those who went missing during a 37-year war with Tamil separatists and a Marxist uprising.

“This measure will help tens of thousands of Sri Lankans whose family members and loved ones are missing and who are unable to address practical issues relating to their disappearance,” the foreign ministry said in a statement.

Under the current law, families cannot access the property, bank accounts or inheritances left by missing relatives unless they can conclusively prove they are dead — an often impossible task.

Huge numbers of minority Tamils went missing during almost four decades of war after being arrested by security services, while thousands more died in military bombardments.

Several mass graves containing skeletal remains have been found in the past two decades, but only a handful have ever been identified.

Thousands of people also went missing during a crackdown by security forces and pro-government vigilante groups on Marxist rebels between 1987 and 1990.

At that time Sri Lanka was notorious for burning dozens of unidentified corpses on piles of tyres by the roadside — so-called “tyre-pyre” burnings designed to drive fear into the rebels.

“Sri Lanka has one of the largest caseloads of missing persons in the world,” the foreign ministry statement said.

“In fact, since 1994 alone the government commissions have received over 65,000 complaints of missing persons.”

Official sources said a “certificate of absence” could be used to make claims in place of a death certificate under the new law, which is likely to pass through parliament in a few months.

The government last month announced it was setting up an office to try to trace the war missing in a move to bring closure for families.

The cffice of missing persons has been tasked with recommending compensation and clearing the way for next of kin to take legal action against anyone responsible for the disappearance of loved ones.

Troops crushed separatist Tamil Tiger rebels in a no-holds-barred offensive in 2009, killing up to 40,000 Tamil civilians.

President Maithripala Sirisena, who came to power in January last year, has agreed to a domestic investigation into violations of international humanitarian law.