Sri Lanka: To be or not to be, the Gota question 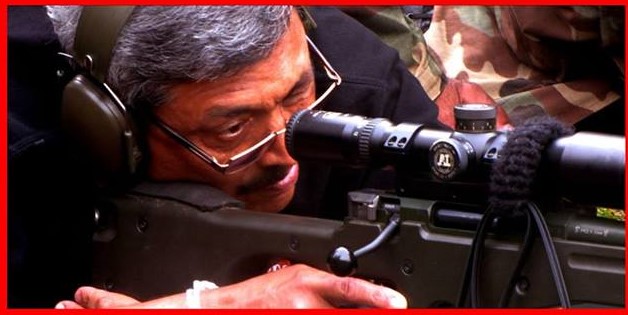 By declaring that he was confident of winning the presidential elections later this year, Gota Rajapaksa has said that he wants to become what he claims the people are tired of – namely, ‘mainstream politicians’. Better or worse still, Gota’s brother Basil R has welcomed the other’s decision to contest the presidency, but has also said that ‘Big Brother’ Mahinda would be the one to take the call for the SLPP-UPFA.

If Gota has come this far from his great reluctance to enter the presidential poll fray, the credit should go neither to Basil, nor to Mahinda, not even to the SLPP-UPFA or others in the political Opposition. Should he become President by the end of the year, he owes it all to one single person than the whole or a majority of Sri Lanka that would have voted him in.

Through the past five years in office, more so in the last couple of them, Prime Minister Ranil Wickremesinghe has done his utmost in pushing Gota R into the electoral arena with the kind of single-mindedness that even the latter possibly lacked while taking on the more focussed LTTE a decade ago. Better still, Wickremesinghe has achieved this much with all humility at his command.

Never ever through the past years has Wickremesinghe or his ruling UNP owned up to all the criminal investigations against Gota and the rest of the Rajapaksa family. It was a tricky situation for them not to do so, after having promised the people that the ‘guilty from the Rajapaksa era’ would be brought to justice – but then their equal determination to bring it all closer to the next round of presidential polls has meant that Gota may be in the driver’s seat, possibly until up to the presidential polls if not afterwards, too.

Gota was known to be the most reluctant of Brothers Rajapaksa for wanting to enter direct politics. He was known to have declared that he was unfit for all that. At the height of the war, he was also known to have claimed that he was more suited for the kind of job that he was doing – organising the war-machinery, facilitating the kind of back-room support that the fighting team required, from near and afar, be it his brother the President, or friendly and not-so-friendly nations and governments, overseas.

Even after the war was over and ministers and MPs of the time offered to vacate their seats for Gota to take up greater and more direct responsibilities in Government, he shied away. Yet, when Mahinda R was re-elected in post-war presidential polls of 2010, Gota stopped short of entering direct politics by getting Urban Development under his care as Defence Secretary – yet having more clout than most ministers, then or since.

At the end of the presidential polls in 2015, there were certain indications that Gota R may stay away from active politics as he did not have the kind of role that he thought him fit to be – an administrative role without having to make political promises or attend political rallies. Yet, even before the official poll results were out, there were the likes of Rajapaksa-aide-turned-adversary Rajitha Senaratne, who were forcing the issue.

Continuing to be a Minister after traversing to the UNP through the Sirisena camp, Senaratne was quoted as telling whoever was willing to listen in the early hours of poll-counting that Gota had ‘escaped’ to a third country. He was even quoted as naming the country. That was the beginning of the present-day rulers, or at least a powerful section thereof, pushing Gota to the wall, from where he could only bounce back the way he says he would now do.

If further evidence of the need for a Gota bounce-back was needed, that came in an ample measure after the nation-wide LG polls of February 2017. The Government hurriedly got Parliament ot pass a new law for setting up ‘Special High Courts’ to try ‘Rajapaksa crimes’, if they could be described as such. Needless to point out, they were aimed at fast-tracking the pending investigations and court cases against the Rajapaksas, but also served a dual purpose of denying their possible contest in the presidential polls, due as they are now.

There cannot be two opinions about the way Gota combined both departments under his direct care to go about organising the urbanisation projects in Colombo and elsewhere in the country. It was also his way of keeping the war-weary soldiers occupied in post-war reconstruction, not only of the war-ravaged North and East, but also the rest of the country.

In doing so, however, Gota seemed to have forgotten to find out how much of it all, his soldier class enjoyed. From being celebrated back home and in the villages and towns of the Sinhala South, to they being seen laying roads, digging up drainages was possibly a great come-down for the uniformed men – and women, too, that too so soon after fighting and winning what was considered an unwinnable war the world over.

In comparing brother Mahinda R’s post-war re-election in 2010 to his defeat five years hence, Gota has said how urban Colombo and Gampaha districts with their strong Sinhala voters had deserted them. Something was possibly amiss there, and he does not seem to have found out what, how and why, in the past five years – or, so would it seem.

There was no gainsaying Gota’s contributions and good work towards beautification of Colombo when he was the Urban Development Secretary. His contributions mainly covered the two districts that he said had not voted for Mahinda in 2015 – and caused the latter’s defeat.

It only meant that there was more to it than ‘development’ that the Sinhala voters desired, at least in the urban centres, desired. Until then, the war-affected Tamil minority voters alone were believed to be holding that view. In Elections-2015, the BBS ensured that the second minority community in the Muslims felt the same way. Gota now confesses that middle-class urban Sinhalas shared those sentiments.

Post-war, the Rajapaksas’ prescription for the nation to prosper was centred on ‘development’. They even implied (and implicated?) that democracy could wait – and would have to wait, if the nation had to progress on the development path. Gota R was believed to be the architect of the model, with Basil implementing it and Mahinda projecting it, upfront.

The world over, it is generally conceded that urban middle-class are sensitive to issues of democracy than their rural brethren. If Gota’s concession on this score is to be translated into a conceptual campaign-point, the Rajapaksas would have to first find a balance, or re-balance their priorities in this regard.

It would not stop there. Brothers Rajapaksa should be ready with answers if queried about it all during campaign-time, with their past record and claims as the base and basis. Nothing explains their own anxiety when Gota is quoted as saying that he never ever owned a ‘white van’.

Both during the war-years, and in the first five years of the post-war era, both under the Rajapaksas, the term ‘white van’ meant only one thing. It certainly did not stop with who owned it – but who ‘ran’ it. Gota’s name topped the public perception, whether true or not.

To be fair to Wickremesinghe, and even more so to Gota and the Rajapaksas, the former never ever talked about the ‘white-van’, either during Elections-2015 or after becoming Prime Minister. No cases have been filed against the Rajapaksas on this score. No direct investigations seem to have been launched, either.

All the NGOs in town that had flagged the ‘white van issue’ as central to the anti-Rajapaksa poll campaign nearer home and political campaign overseas are silent on the issue. They who were agitated all the time over the issue when the Rajapaksas were in power are inexplicably silent now, when a ‘friendly and more democratic government’ is in power.

Yet, there is no denying two or three pending police investigations that could seek to fix ‘culpable responsibility’ on those that were sought to be ‘fixed’ when in power and may be pursued after a lull, when they seem to be back close to it, all over again. Of course, pending corruption cases against the Rajapaksas, to dispose of which before the elections two ‘special high courts’ have been set up, may appeal to the domestic constituency, but not necessarily to the international community(read: West).

It may however be a coincidence that Justice Minister Thalatha Atukorale has since inaugurated the second special high court under a post-haste law post-LG polls, to try all those cases relating to the ‘Rajapaksa era’. It remains to be seen if the three-Judge Bench would be burdened with more of cases of corruption and nepotism, or those that could be broadly classified as ‘war crimes’ without branding them as such.

The ‘December 2005’ killing of five Tamil school students in Trincomallee, the ‘missing eleven’ in which Adm Wasantha Karannangoda is now a suspect, and the forgotten ‘French NGOs case’ from the war-time East come to mind. They all could become sample cases to show the world that the Government can conduct independent and credible ‘war-time investigations’ without international interference or assistance.

The urgency for the special high courts were felt, not because the Government had to convince the international community about ‘war-crime’ probe – which anyway they have not begun handling, at least as yet. Even the Karannangoda case is before a regular criminal court. He too challenged the lower court order for his arrest only before the Court of Appeal, which has stayed the same, pending further hearing and disposal.

Instead, the special high courts became necessary because the Rajapaksas were back in electoral reckoning and had swept the local government polls in February 2017. So petrified the Government parties seemed to have become that they are still unwilling to hold provincial council polls, long after they became due – Some democracy, this, compared to Mahinda R, who was holding PC polls at will, but erring more so on the ‘right’ side – holding them before became due, because and only because it was a good time for him to win one more!