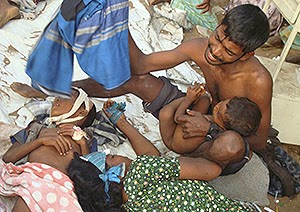 The Tamil National Alliance (TNA) welcomes the Report of the United Nations High Commissioner for Human Rights on promoting reconciliation and accountability in Sri Lanka to the 25th session of the Human Rights Council. The High Commissioner’s report contains a comprehensive and accurate depiction of the serious human rights issues facing Sri Lanka. The Report has benefited from the High Commissioner’s visit to Sri Lanka, where she was able to observe first-hand the issues of concern to victims and survivors in the Northern and Eastern Provinces.
The High Commissioner has raised a number of serious concerns in her Report which also pertain to the entire country: the treatment of former combatants and detainees; attacks on religious minorities; the attack on dissent and the freedom of expression; the government’s dismal record in implementing LLRC recommendations; and the government’s disinterest in making progress on accountability. The TNA is particularly concerned over the impact of the high levels of militarization on the security of women in the Northern and Eastern Provinces. There are mounting and credible reports of systematic patterns of sexual harassment and violence in highly militarized areas, and we ask that the Human Rights Council take cognizance of this reality in its deliberations on Sri Lanka.
We also take serious note of the High Commissioner’s observations on the impermissibility of amnesty in respect of international crimes and gross violations of human rights. We observe that the Secretary General’s Panel of Experts on Accountability in Sri Lanka made similar observations, and that the Government of Sri Lanka’s own written submissions to the Panel of Experts viewed amnesty provisions as inappropriate for the reason that they “intrinsically encourage a culture of impunity”. The TNA has and continues to articulate victims’ demands for truth, justice, just resolution of land issues reparations and guarantees of non-recurrence; the undesirability of blanket amnesty provisions; and the need to give effect to the duty to prosecute international crimes and gross human rights abuses.
The TNA also unequivocally supports the High Commissioner’s recommendation that the Human Rights Council establish an international inquiry mechanism to further investigate alleged violations of international humanitarian and human rights laws, in addition to monitoring any domestic processes for accountability initiated by the Government of Sri Lanka. We believe that such a mechanism is necessary in the light of the government’s unwillingness to take steps towards accountability.
We also note that the Eighteenth Amendment to the Constitution, which we have consistently opposed, vests in the President virtually exclusive powers over key public appointments. Thus the deep politicization of civil institutions, together with the widely acknowledged erosion of judicial independence, seriously undermines any prospects of a credible domestic process for accountability.
We are mindful of the important need for all communities in Sri Lanka to reckon with the past in a spirit of reconciliation. We sincerely believe that an international Commission of Inquiry into allegations against both sides will provide our communities the space and environment to come to terms with crimes committed in our respective names. The TNA remains committed to leading the Tamil people through a painful process of introspection, and encourages the government to use the opportunity of an international inquiry to break with the past and meaningfully pursue reconciliation.
Share
Facebook
Twitter
WhatsApp
Pinterest
Email