Sri Lanka: This Govt. is bad but the alternative is terrible 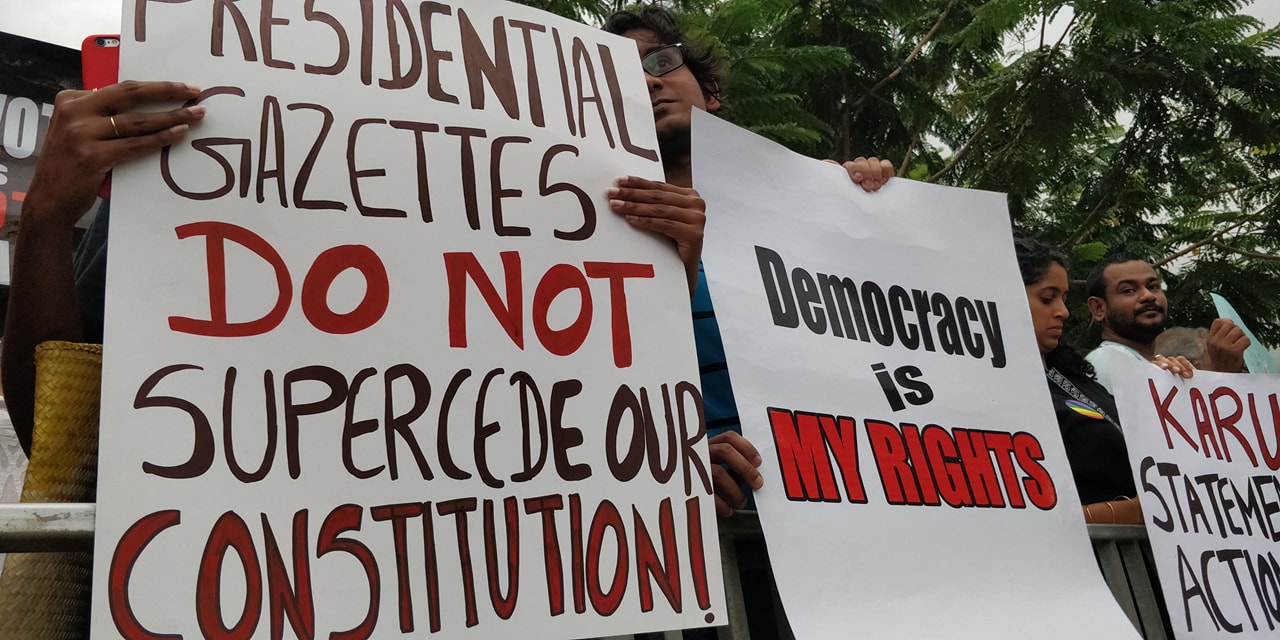 “If voting made any difference they wouldn’t let us do it.” ~ Mark Twain

On January 8, 2015, the people of this country unreservedly placed their hopes and aspirations on line. Their expression in the exercise of their fundamental right to vote couldn’t have been clearer. They elected a new government. They rejected the Rajapaksa-led coalition that, in their opinion, was corrupt, nepotistic and fast approaching the threshold of despotism founded on family-bandysm. What would have happened in the event the Rajapaksas were elected again 2015 would be another tale to tell, yet for the good fortune of all Sri Lankans that did not happen.

But with passage of time, almost four years, those hopes and aspirations have all evaporated like a fading mist against a furious, rising sun. They didn’t vanish overnight; nor did they give advance notice. But the coming of disaster was definitive. The one critical factor that bonded the coalition, the bond between President Sirisena and PM Wickremesinghe, broke as under. Within a matter of mere 24 hours, to the astonishment of the entire country- except perhaps not to the conspirators of the unsavoury event- the sitting Prime Minister was summarily removed and another sworn in. Mahinda Rajapaksa, thanks to the decision of the President, had another short political honeymoon in power for 50 days!

What the people witnessed during those 50 days gave a glimpse of the type of government that they would have if the 50 days continued for another few years. The unleashing of the fury of MR’s comrades-in-arms was manifestly attempting to control the House of Parliament. They met more than adequate, legitimate and legal resistance from the real leader of Parliament, the Speaker, Karu Jayasuriya. But there won’t be Karu Jayasuriya as Speaker in the event the Rajapaksas form a government again. Behaviour of the MR’s disciples under a ‘friendly’ and weak speaker would be unimaginable. The Rajapaksas in a socio-political context are an abysmal example to the country. There is no argument about it. Slanderous gossip, alleged financial crimes in addition to boundless greed, self-indulgence and obsessive nepotism have all added up to a practice of lifestyles one should not follow.

But with passage of time, almost four years, those hopes and aspirations have all evaporated like a fading mist against a furious, rising sun. They didn’t vanish overnight; nor did they give advance notice. But the coming of disaster was definitive.

This socio-political example set by the Rajapaksas has assumed exponential proportions with the growth of a special class of businessmen and women whose solitary aim in life consists in gaining proximity to the powers that be and gaining access to the numerous unsolicited tenders and government-sponsored work which eventually bring enormous financial benefits both to themselves and their foremost clients, the ‘first family’. The most bizarre aspect of the culture that these political vagabonds set out to establish as a norm is this abrasive character of over-indulgence in material wealth and insatiable appetite for women and wine.

The heavenly atmosphere that enveloped the state machinery began devouring the mere mundane. A very few who possessed a probing mind could detect the cracks and fissures of the veneer that covered an utterly corrupt and dishonest disposition of a family seemingly devoted to the five precepts of Buddhism. That culture is not for our children who pursue a role model. The victory over the Liberation Tigers of Tamil Elam (LTTE) is no licence for the rape of the country they allegedly saved. In addition to this rotten culture that they were instrumental in creating and then injecting into the surrounding brethren of society, the continuous stay in power gave them false hope of power for lifetime.

It is this obsession of lasting power that ultimately killed their political ambitions. Dividing the country’s financial powers- by way of yearly appropriations called the Budget- among the three brothers, Mahinda, Basil and Gotabhaya, the first family ran the administration like their own private property. This malpractice of financial administration continued as long as the regime lasted.

Inflated budgets within their grasp helped them to further their stature in the country as super-men; unlimited access to the government coffers afforded them an unadulterated opportunity to ensure a false image of efficiency and go-to men. The average man and woman did not know nor did he/she understand the realistic position of this malpractice of government and its financial administration.

The very promise that the coalition led by Maithripala Sirisena and Ranil Wickremesinghe held out to the voters in 2015 has fallen flat. The so-called corrupt politicians of the last regime are still free and even daydreaming about coming back to power in order to do more damage to the fabric of our society

Given this totally unacceptable culture and the socio-political ethos, so created by the Rajapaksas with the unexpressed acceptance of a large part of our population, took their winding and unkind journey for nearly two decades. The most distressing aspect of this political dynamic is the total docility of our people. Treatment of bribery and corruption as part of the system is truly dreadful. For the hardworking man, it is brutally unfair; for the school going child, it is unpromising and for their henchmen and women, it is salivating and alluring for more and more money and power. It is indeed a bad alternative.

Yet today’s voter may have already forgotten about these past misdeeds; even if he does remember, he might let these vicious and heartless memories go, for his engagement with politics matters only on the eve of an election. And it is in this context of forgiving and forgetting climate the current government of Ranil Wickremesinghe has failed so miserably. Not pursuing the allegations against the former first family to its logical end has come to haunt them. Mark Twain said: “The government is merely a servant―merely a temporary servant; it cannot be its prerogative to determine what is right and what is wrong, and decide who is a patriot and who isn’t. Its function is to obey orders, not originate them.” The very promise that the coalition led by Maithripala Sirisena and Ranil Wickremesinghe held out to the voters in 2015 has fallen flat. The so-called corrupt politicians of the last regime are still free and even daydreaming about coming back to power in order to do more damage to the fabric of our society.

After the Bond-scam scandal the so-called Yahapalanaya image has flown out of the window. The broken allegiance between Ranil and Maithripala, the President is beyond repair. Yet the air of freedom, especially among those who practise journalism and writing is soothing and seeming to be lasting. The establishment of the various Councils to govern the diverse sectors of the administration machinery seems to have taken control the best illustration of which was how independent our judiciary was during the attempted coup enacted by the Rajapaksas aided and abetted by the Executive.

However, the current administration is bad; yet the alternative is beyond terrible.