Sri Lanka: The UNHRC process; the blind leading the blinder 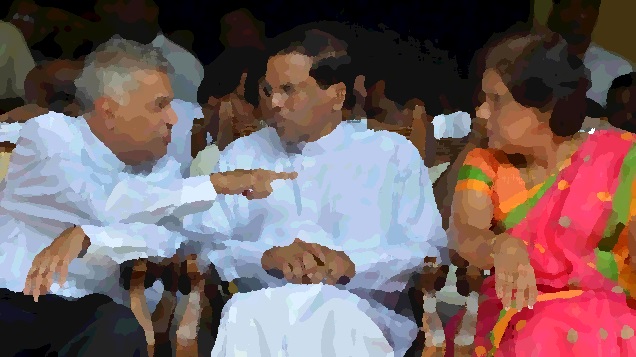 Mahinda-Gota-Sarath did it, now Maithri-Ranil-CBK have no choice but to hide it.

His Excellency President Maithripala Sirisena is no Lincoln or Lenin; not even an NM. You need a backbone to stand up and defy racists, not to capitulate to them. Does a Sinhala politician need a backbone to cringe and do the bidding of chauvinists? SWRD would have required a backbone to persist with the B-C Pact, but not to surrender to saffron bigots and shred it. If Dudley had a spine he would have stood with the Dudley-Chelva Agreement; instead he proved another invertebrate. Sirisena says “he is neither disposed to doing things the foreign NGO way, nor inclined to help bring charge sheets against the Sri Lankan military”! That’s pretty final isn’t it? It’s no longer a question of “if” and “alleged”; it’s an ‘honourable discharge’ whatever the facts. B-C, Dudley-Chelva and now Maithri-UNHRC, fall in the same pattern, all deeds of invertebrates. The easy explanation speaks of ‘opportunism’; but opportunism blossoms on the fertile soil of an ingrained psyche of populist racism. That’s what this piece is about.

Imagine NM making Sirisena’s kind of unconditional whitewash! No not possible; and that’s why people of that calibre could not accede to the highest political office. The grip of racism, and its creed and colour variants, show how primitive human psyche and consciousness still are, and how little distance we have travelled to enlightenment (as per Gautama or Eighteenth Century Europe). The roots of bigotry lie in family, upbringing, culture, tradition and faith (rata jathika abimane). Whether there is something in our DNA that predisposes most humans to hatred of the “other” is an open question. Mind you I am not picking on the Sinhalese; if the boot were on the other foot, it would have been the same story, mutatis mutandis, with the cast of characters inverted.

At this time of writing (mid-week) it seems likely that Sri Lanka will get an extension of time to “implement” (sic) UNHRC Joint Resolution 30/1 cosponsored by His Excellency. There is no way he can avoid responsibility as Head of State – the fairytale that he was not aware of the Resolution’s contents is worthy of the Brothers Grimm. And if the Grimm version had a modicum of truth why did he not exert his fully erect backbone and denounce the Prime Minister and Foreign Minister who signed on his behalf? Has Rip van Sirisena been in deep slumber till March 2017? The story is poppycock blown up by the Sirisena-SLFP to serve current needs and deal with the Rajapaksa inspired chauvinist onslaught.

Here is my point: Maithripala Sirisena, as far as I can judge, is not a racist; sans pressure from chauvinists he is likely to address Tamil grievances and throw war criminals in the fire if culpability is proved. In other words, even decent people except extraordinary ones like Lincoln, Lenin and our NM, capitulate and fall in line with the general mores and customs of their time. Society is tainted by inbred racism and pedestrian leaders can do no better than follow. Depressing, true and not new; a long time ago two near-contemporaries Gautama Siddhartha (d.480BC) and Socrates (b.470BC) drew attention to the shallowness of the unenlightened and untutored mind.

The Prime Minister’s about-turn serves to underline my case. “If a constitutional amendment is moved to set up a hybrid court it would need a 2/3 majority and approval at a referendum. This is not politically feasible”. Quite! Neither a Sinhalese majority parliament nor a Sinhalese electorate would by the remotest flight of imagination countenance putting the Sinhalese military in the dock irrespective of the evidence. Such is true be it Sri Lanka, Serbia, Somalia, the States or Timbuktu. The US does not even recognise the International Criminal Court except when non-Americans are put on trial!

The catch-22 conundrum confronting the government is that if Mangala is successful in obtaining a deferment of deadline it will pertain only to the date, not the contents of the resolution. Resolution 30/1 co-sponsored by His Excellency’s ministers, says:

“. . . affirms that a credible justice process should include independent judicial and prosecutorial institutions led by individuals known for their integrity and impartiality, and also affirms in this regard the importance of participation, in a Sri Lankan judicial mechanism,including the special council’s office, of Commonwealth and other foreign Judges, defence lawyers and authorised prosecutors and investigators”.

Mangala’s can win only a pyrrhic victory as there is no wriggle room here. The only way out for Sirisena would be to carry an amendment to the resolution on the grounds that after regime change the independence of the judiciary stands restored. This is true to a considerable extent (Mohan like creepy crawlies are no more) but it is very doubtful whether it extends to an emotion charged hot potato like prosecution of “war heroes” for crimes against mere Tamils. Dumping a habit-bound mindset for a bold new outlook takes centuries. Even those who think that the country should not countenance war-crimes by the security forces, hasten to add that “a witch-hunt” against the forces cannot to be permitted either. The likelihood of the said witch-hunt is so remote that such grave and sonorous provisos are spurious but have to be inserted to keep the rabble at bay. My point again.

What to do about the foreign judges Sirisena’s ministers inserted? Since amending the Resolution seems difficult, maybe spend two more years doing nothing, like the last two, then cook up another lame duck story and try for more extensions. Or have the whole thing dumped. An overwhelming majority of Sinhalese want the war-crimes and human rights tribunal thrown out. They believe that in a war against terrorism, the bombing of civilian camps, the white flag incident, the murder of Prabhakaran’s 10-year old son, and so on, were done in the heat of anger, and anyway much was deserved retribution. Mahinda-Gota-Sarath did it, now Maithri-Ranil-CBK have no choice but to hide it.

Grown up people have no illusions, they know the eventual outcome will be zilch and they know that the international community will find a way to accommodate zilch. That is my sober and sombre prediction. As war-crimes issue fades into the background, except bi-annual jamborees and partying in Geneva, a different time bomb is ticking centre stage at home. Will this government survive its full term? And if it does survive what will happen in 2020? I flagged the issue a fortnight ago and these will be my substantive topics next week. But I don’t want to leave you panting for the next instalment, so one sentence answers for now. My answer to Q1 is that it is likely the government will survive till the end or near the end its term.

To the second question my answer is conditional. If things go on the way they have for the last two years (there is no sign of change) then the Wickremesinghe administration is a one-time show, a one-term government. Come 2020 the UNP will be thrown out. When I said my answer is conditional I was alluding to the phrase “If things go on the way they have”. I have a lot to say on that score, so buy the paper for next week’s thrilling instalment.

I will conclude by explaining why I oppose the UNHRC giving the Sri Lankan state an extension of time. Haven’t I taken pains to explain that Sirisena and Ranil are slaves to a backward nationalist psyche which is stronger than them? Why then am I being difficult instead of ending with a forgiving “I say chaps its all right” pat on the back? Ah because that is the kind of compromise which will mislead the masses and do nothing to foster an enlightened, tolerant and pluralist nation. Compromise in the name of pragmatism, on this occasion, is to delude the people, I mean the Sinhalese, about the underlying truth in respect of extremism.

Now is the occasion to say damn racism, don’t give an inch to capitulators. The mass mind is more receptive now than in 1948-49, in Banda’s time or under the blight of JR race hate. History doesn’t go in circles – the chakra chaps got it wrong since religion is a bit daft – change moves in a spiral incorporating progress or regress. Now is a time to take a stand, to be unpopular but right; it will yield dividends. Educate the mass for modernism and enlightenment values. NM was dead right in 1955-56 to stand against Sinhala Only and suffer the consequences. That is why history absolved him and despised the capitulators.