Sri Lanka: The state is being over-represented by its security arm 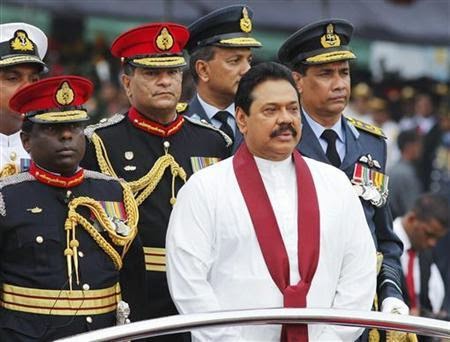 Jehan Perera
The sudden deterioration in the climate in the north is unfortunate.  When I visited North last week it seemed that the sense of normalcy in the North was getting stronger. The military posts and uniformed sentries on duty at short and regular intervals on the roads are no longer there.  Most of the people I spoke to in Jaffna told me that the military personnel in Jaffna behaved well and they encountered few or no problems with them.  However, they also said they could not speak with assurance about how the military was behaving in the Wanni, which is a much poorer and less densely inhabited part of the North.  When I spoke to people in Kilinochchi they gave answers that were no different from those of the people of Jaffna.  They even said that the military was helpful to the extent that if a household had a problem they would even go sometimes to the army rather than to the grama sevaka or village official, as the army could do more to help them.

However, the recent arrest and detention of Balendran Jayakumari , one of the leading activist members of the organization of families of the disappeared may be a  indication of things to come.  She was arrested in the northern district of Kilinochchi after a policeman was shot in that area.  The government’s police spokesperson stated that a shooting incident took place in the north and they have identified a house where the suspect has been hiding and that two women are being investigated.    Human rights defenders in the area report lots of checkpoints, raids, questioning, fear and surveillance.   Jayakumari is reported to have been detained under the Prevention of Terrorism Act for 16 days by a court order and sent to the Boosa detention centre which is at the other southern corner of the country.   This has been followed by the arrest and interrogation of two human rights defenders,  Ruki Fernando and Fr Praveen Selvadurai who were in Kilinochchi to see to the welfare of other families of disappeared in the aftermath of the arrest of Jayakumari.

This is an example of a counterproductive action that has been taken in disregard of the larger political consequences at a time when the UN Human Rights Council is debating the human rights situation in Sri Lanka.   Human rights activists like Ruki and Fr Praveen are those who give hope to the hopeless and who by their support discourage extremism.  The draft resolution on Sri Lanka which is being circulated among members of the UN Human Rights Council expresses deep concern over reported intimidation and retaliation against civil society members who engage with UN human rights mechanisms including those who met with the High Commissioner during her visit.  As the arrests in the North can conceivably be seen as an attempt to cause fear and the silencing of those who are seeking justice, the government needs to make clear what its position on this matter is and give a credible explanation.  It also needs to reconsider its use of the military to deal with the people of the North as this is bound to cause increased friction in the longer term.

The militarization of the North consists of three factors.

One is the building of new military complexes right in the heart of Jaffna.  I saw a new one being built opposite the Civil Military Liaison Office, itself a big military complex.  This is on both sides of a single road in a highly residential part of Jaffna.  At a time when the government in its efforts to beautify Colombo is planning to move its military complexes located within Colombo to the suburbs, it is putting these up in the heart of Jaffna, which gives the people an impression of an oppressive and huge military presence.
The second factor is ubiquitous presence of military and intelligence personnel in civilian dress who are there to gather information, which they do very boldly.  They will go into the midst of a civilian function, such as a prayer meeting, and inquire what is going on.

The third factor is the acquisition of land, some of it privately owned, most of it state land allocated to different government departments in the past, such as the railway, being transferred to the military to set up more camps, to build military complexes, and which denies to the people their traditional farming land.  The stated reason of the government for the building of military complexes in the North is to ensure national security.  However, a civilian population that feels itself to be oppressed, even as a perception rather than a reality, is a more likely breeding ground for revolt and anti-government sentiment than a civilian population that feels itself to be free and trusted.   This is what the government seems to fear, and is guarding itself against, but in a way that is making its fears come true.

In both Jaffna and Kilinochchi when I asked what the people’s main complaints and grievances were, the answers that I invariably received was that it was more opportunities for livelihoods and to obtain houses to replace what they had lost in the war.  It seems that the people’s priorities are economic betterment, as argued by the government.  At the same time the people had the feeling that they were not being trusted which was the rationale for the presence of the army camps in several areas in small contingents. This is a barrier to true reconciliation.   The main problem is the presence of the army in the North because the government mistrusts the Tamil people.  Five years after the end of the war there is a need to start rebuilding the trust rather than to reinforce the mistrust which is what is happening.

Unfortunately, there seems to be an absence of a coordinated and rational governmental response to dealing with the Tamil people.  This has become evident in the case of incidents at the community level taking place in North of the country in the shadow of the resolution on Sri Lanka being debated at the UN Human Rights Council. The draft resolution expresses ” serious concern at the continuing reports of violations of human rights in Sri Lanka, including sexual and gender-based violence, enforced disappearances, extrajudicial killings, torture and violations of the rights to freedom of expression, association and peaceful assembly, as well as intimidation of and reprisals against human rights defenders, members of civil society and journalists, threats to judicial independence and the rule of law…”

Ironically, the incidents pertain to the issues highlighted by the draft resolution in regard to disappeared persons and threats to human rights defenders.   One such incident concerns the alleged mass grave found in Mannar in the north, which was one of the last battlegrounds of the war.  Initially government spokespersons asserted that the graves were those of victims of the LTTE.  However, this was subsequently revised to be a traditional cemetery.  The Archaeological Department which conducted excavations into the mass grave declared that the alleged mass graves were in fact an ancient graveyard.  News reports said that the government authorities had also temporarily terminated the excavations connected with the investigation and the remains would be sent for laboratory testing.

However, relatives of those gone missing during the war have not been satisfied with this decision and have canvassed the matter in courts of law.  These developments have taken place in the run up to the vote in Geneva on the resolution on Sri Lanka.  The government’s claim that a mass grave unearthed by workers laying water pipes alongside a road could be a traditional cemetery, after having said it was an LTTE mass grave where the LTTE buried the bodies of its victims, would be viewed with skepticism at this time.  There is a need for the government to speak in one voice about important and controversial matters.  There is a need for the Sri Lankan State to galvanise its civil institutions which are a necessary counter balance to those that are couched in the language of national security. The problem seems to be that Sri Lanka today is being represented by institutions of the state emphasizing national security priorities, narrowly defined.
The Island