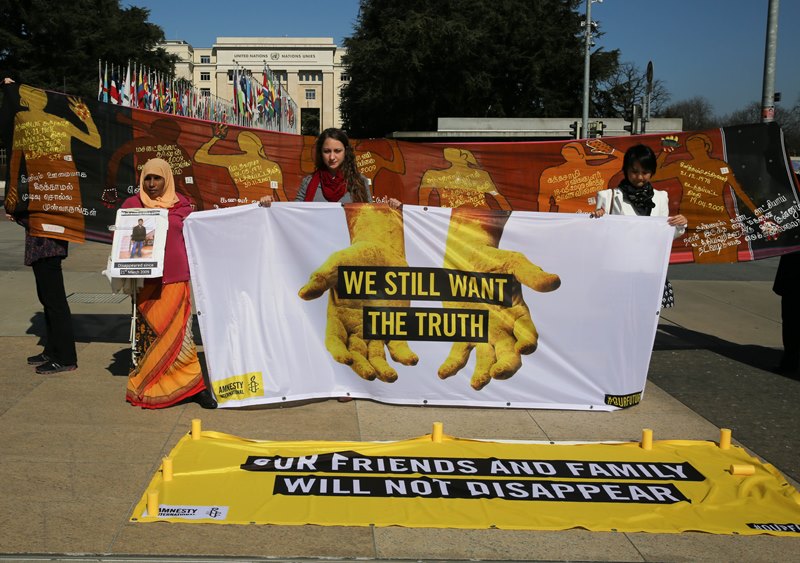 When Sri Lanka co-sponsored UN Human Rights Council Resolution 30/1 Promoting reconciliation, accountability and human rights in Sri Lanka in October 2015,[2] it set out an ambitious agenda, promising truth, justice, reparation and guarantees of non-recurrence to victims of human rights violations and other crimes under international law.[3] Among the commitments made in the Resolution are initiatives to address one of the key features of the conflict: enforced disappearances. This is through criminalizing this act, ratifying the UN Convention for the Protection of All Persons from Enforced Disappearance, and establishing new bodies and procedures to assist families to seek the truth about what happened to their missing relatives, as well as to ensure justice for any crimes committed, and assistance in rebuilding damaged lives and livelihoods. Efforts to eradicate the practice of enforced disappearance and provide remedies to victims and their families are crucial to allow Sri Lankans to move forward.

Victims of other grave abuses allegedly committed by parties to Sri Lanka’s protracted armed conflict between government forces and the Liberation Tigers of Tamil Eelam (LTTE), which ended in 2009, also await truth and justice, reparation for the harm done to them, and effective guarantees of non-recurrence. The vast majority of alleged abuses before, during, and after Sri Lanka’s armed conflict has not been effectively investigated. Perpetrators have not been prosecuted and torture in police custody persists with impunity.[4]

The Sirisena Government has prioritized constitutional reform aimed at preventing future abuse of official power, and its public consultations on the issue have been praised by participants.  But families of the disappeared, activists and other ordinary Sri Lankans say that the Government’s broader reform agenda is unclear; that it does not address complaints of families who testified to the Paranagama Commission[5] that relatives were seen in Army custody before they disappeared. It also does not address the lack of assistance to people attempting to recover from displacement and return of lands occupied by the armed forces. On a recent visit to Sri Lanka, Amnesty International visited Vallikamam North, Jaffna district where displaced families still living in make-shift shelters said they had received no assistance.

The Government must not squander the good will of Sri Lankans who have waited decades for their human rights demands to be addressed. It must increase the pace, transparency and visibility of reform efforts ensuring these are undertaken with genuine cross community collaboration.

Amnesty International understands that it will take time for the Government to fully implement its commitments.  Nevertheless, it is important that the Government make progress to build public confidence that it is serious in its reform efforts.

THE SRI LANKAN GOVERNMENT SHOULD BEGIN BY:

As of June 2016, the Consultation Task Force on Reconciliation Mechanisms had not yet begun regional consultations on proposed transitional justice mechanisms. A website in Sinhala, Tamil and English was created in March, but is inaccessible to those without access to Internet.  On 5 April the Task Force invited written submissions on the design of structures, processes and measures to seek truth and justice, ensure accountability for human rights violations and provide measures for redress.[6] Concerns that the Task Force has lacked sufficient resources and time to conduct detailed consultations accessible to all Sri Lankans must be addressed to ensure public confidence and ownership. In particular, effective and independent victim and witness protection mechanisms must be put in place immediately so they can engage safely in the process.

Law enforcement or military personnel, where there is evidence of serious human rights violations, should be removed or barred from service.

Having signed and ratified the Convention, the Government should complete implementation processes as a key step towards resolving the tens of thousands of outstanding complaints and ensure such practices are eradicated.[7]

The Cabinet has approved plans for an ‘Office on Missing Persons’ and a proposal to issue certificates of absence rather than death certificates to families of the disappeared. However, neither initiative has yet been implemented. Victims’ families have expressed concern over a lack of consultation during the planning process and reports that information gathered during investigations might be withheld from other criminal investigations and truth and reparation mechanisms. Transparency and effective information sharing between all mechanisms established to deliver truth, justice, reparation and non-recurrence is vital to meet all four pillars. The Cabinet announced plans to create a centralized database on “missing persons”.[9]

Having vowed to revise the draconian PTA, acknowledging it does not meet international standards, the Government should repeal the Act without delay and stop it being used to arrest and detain suspects. The broad powers in the Act have contributed to widespread arbitrary arrest and detention for lengthy periods of time, torture and enforced disappearances. It has also been used to restrict freedom of expression, association and movement. There were over 20 PTA arrests reported in April 2016 alone with families complaining that detaining officers in civilian clothes failed to identify themselves.

A proposed amendment to the Criminal Procedure Code guaranteeing access to counsel after the police record an initial statement does not go far enough to prevent abuse.

Despite repeated promises, no one has been held accountable for the January 2006 extrajudicial executions of five students in Trincomalee by the security personnel or the killing of 17 aid workers with Action Contre La Faim in August 2006.  The disappearance of human rights defender Stephen Sunthararaj in 2009, just hours after his release from detention, also remains unresolved. As do those of political activists Lalith Weeraraj and Kugan Muruganandan in 2011, also victims of enforced disappearance for assisting families of the disappeared to organize a demonstration against military abuse of civilians in the north. Sandhya Eknaligoda, wife of dissident cartoonist Prageeth Eknaligoda who disappeared in 2010, is still waiting for answers. Evidence put forward during habeas corpus proceedings suggests he was detained by military personnel. Nine army intelligence officers are under investigation, but the case has moved slowly with repeated political efforts to disrupt its progress.

Recognizing that it takes time to fully assess the harm caused to victims throughout the country and to develop a reparation program in full consultation with victims, it is important that a program of interim measures is developed to provide assistance to those in urgent need of support, until a national reparation program is established. This should include rehabilitation, compensation and restitution of property and lands seized by the military during the conflict.

The implementation of these recommendations is essential to strengthen the national justice system and ensure national courts tackle impunity effectively.

[1] Note this document includes additional text, such as footnotes, that due to the UN word-count limit was not included in the version submitted to the Human Rights Council.

[3] As described in the Report of the OHCHR Investigation on Sri Lanka (OISL), Recommendation 20, page 251, 16 September 2015 A/HRC/30/CRP.2. Available at: http://un.lk/news/zeid-urges-creation-of-hybrid-special-court-in-sri-lanka-as-un-report-confirms-patterns-of-grave-violations/

[4] Preliminary observations and recommendations of the Special Rapporteur on torture and other cruel, inhuman and degrading treatment or punishment, Mr. Juan E. Mendez, Colombo, 7 May 2016, pg.3

[5] Formally the “Presidential Commission of Inquiry into Complaints of Abductions and Disappearances,” established by President Mahinda Rajapaksa and extended by President Sirisena.  It is the most recent in a long list of Commissions of Inquiry specifically mandated to examine reports of missing persons, abductions and alleged enforced disappearances since 1991, not counting broader inquiries such as the Lesson Learnt and Reconciliation Commission (LLRC) that also heard from thousands of family members seeking information about relatives.

[6] Secretariat for Coordinating Reconciliation Mechanisms, http://www.scrm.gov.lk/#!consultations/cjg9.  It originally provided for a short deadline of less than a month for submissions, but later extended the deadline to 25 June.

[7] The OISL received a confidential list of 318 alleged perpetrators named by the All Island Commission of Inquiry into Involuntary Removal and Disappearances of Certain Persons which examined 10,136 complaints and submitted its Final Report in 2001.

[8] Activists and families of victims have asked that the name of the Office be changed to acknowledge the enforced nature of disappearances in Sri Lanka. (See, ‘Open Letter to President Sirisena on Proposed Missing Persons Office’; Sri Lanka Brief. 09 May 2016,  https://srilankabrief.org/2016/05/open-letter-to-president-sirisena-on-proposed-missing-persons-office/, accessed 24 May 2016)