Sri Lanka: The Challenges to democratisation and outlook of political transition 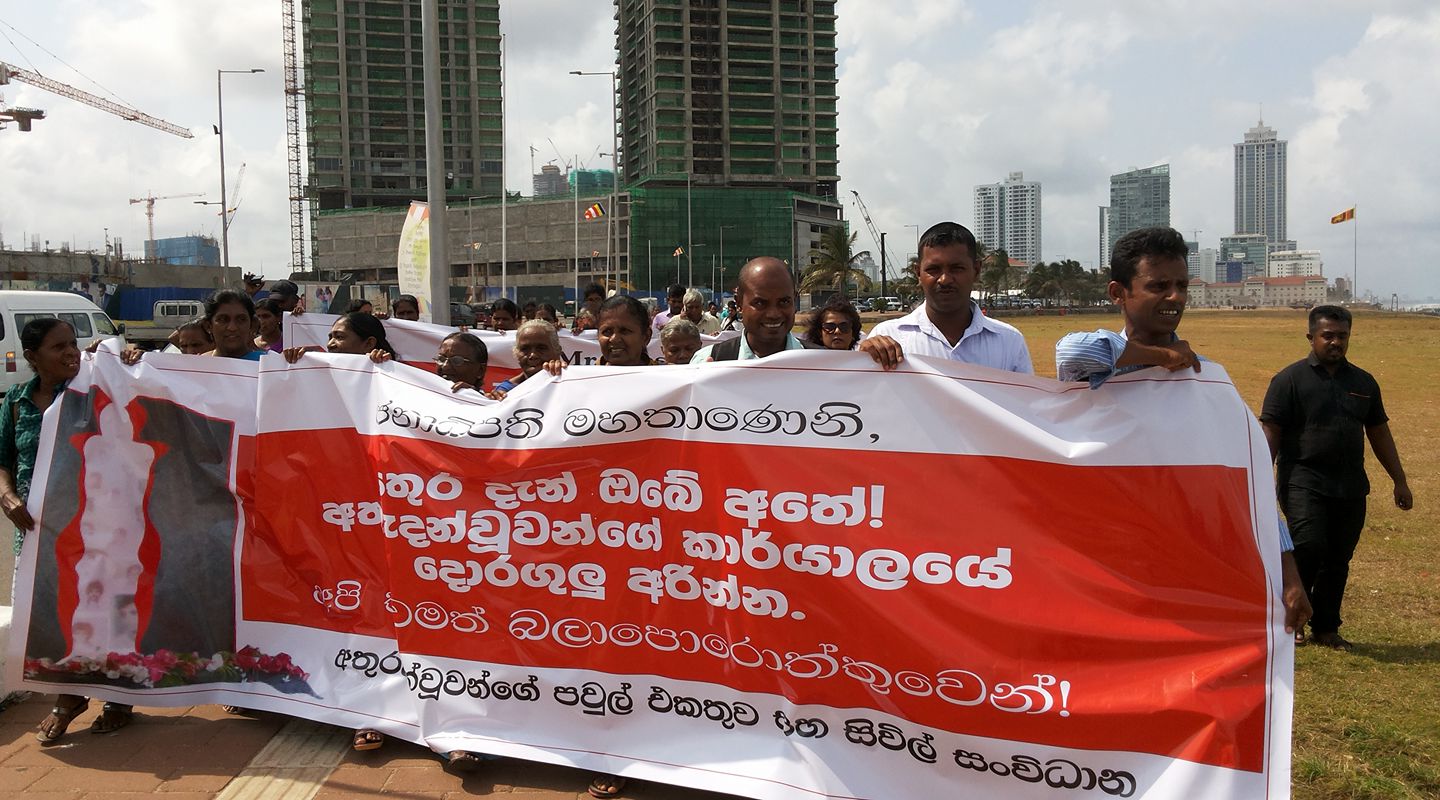 Image: Activists are calling on the government to establish the OMP which the president is keeping in his drawer.

3. THE CHALLENGES TO DEMOCRATISATION.

There are three key challenges to the democratisation process that could prove to be divisive and undermine the current momentum for reforms and, in particular, the two thirds majority in parliament to adopt the envisaged constitutional reforms.

The constitutional negotiation on how to re-structure the state is fraught with difficulties that have bedevilled Sri Lanka for decades. The issue of de-centralisation was a root cause of the island nation’s long-running armed conflict and the crux of the ceasefire agreements brokered between the government and LTTE, although no lasting solution was found. Today, the issue of state structure touches upon the key sensitivities of all Sri Lankans and is intimately bound up with questions of religious, linguistic and cultural rights.
For Tamil representatives, an ideal outcome would be a federal state in which the two Northern provinces would merge into one federal unit. Such a proposal is anathema to many in the majority Sinhalese community, especially those who view de-centralisation as a prelude to secession. They attach high importance to the current constitutional language of Sri Lanka as a ‘unitary’ state. At the present moment, there appears to be much good will to find an agreeable solution. However, the issue of state structure will be the principle rallying point for opposition to the overall process.

Sinhalese nationalists will argue that any concession on the state structure is tantamount to giving away at the negotiation table what the army achieved on the battlefield. For many Tamils, nothing short of ironclad guarantees of autonomy will be acceptable. It is somewhere between these two poles that a creative solution must be found.

Dealing with the Past: Transitional Justice

Sri Lanka’s decades of armed conflict brought terrible suffering to many Sri Lankans as well as significant damage to property and the economy.

At the end of the war in 2009, some 500,000 people were estimated to be displaced in addition to an estimated one million who had emigrated over time. The UN’s Human Rights Commissioner Zeid Ra’ad Al Hussein noted: “Our investigation has laid bare the horrific level of violations and abuses that occurred in Sri Lanka, including indiscriminate shelling, extrajudicial killings, enforced disappearances, harrowing accounts of torture and sexual violence, recruitment of children and other grave crimes.”6

The current opening presents a unique opportunity to come to terms with this violent past. The process of transitional justice is unfolding on the basis of a UN Human Rights Council resolution of 29 September 2015, which was co-sponsored by the government of Sri Lanka.7 The resolution covers four aspects:

• Seeking the truth about what happened;
• Justice (victims should have remedies and the State should investigate and prosecute)
• Reparation for victims;
• Non-recurrence, ensuring abuses do not happen in the future.

The resolution makes clear that this process should investigate the conduct of the government of Sri Lanka and the defeated LTTE with equal depth and rigour. All aspects covered by the resolution are politically sensitive, in particular the potential prosecution of army personnel for war crimes and return of land confiscated by the military. The release of further political prisoners, a significant number of them convicted under the Prevention of Terrorism Act, is also likely to prove controversial. For many belonging to the Sinhalese nationalist spectrum it is unthinkable that individuals they revere as war heroes could end up before a court, while those they consider ‘terrorists’ walk free. However, for many other Sri Lankans, including within the majority Singhalese community, it is seen as important that possible war crimes be investigated.

Overall, the transitional justice process is likely to be an enduring feature of Sri Lanka’s transition and require a longer-term view than the immediate challenges of constitutional reform. It is a necessary aspect of Sri Lanka’s transition process to foster a democratic, rule of law-based culture. The process of coming to terms with the past will need to be handled with a great deal of care to be fair, effective and to avoid harming the reform process as a whole.

Sri Lanka is in a comparatively strong economic position, registering significant growth since 2000 and reducing its poverty rate over the same period. The country strives to transition from a low middle-income country to a highmiddle income country. While its fundamental data are promising, in particular its literacy rate and comparatively high education standards, which exceed both regional and global averages, there are a number of short-term challenges.

In April 2016, the World Bank noted: “Sri Lanka’s economic growth is expected to grow at 5.3 percent in 2016 and 2017 driven by increased public investment and postponed investments in 2015. The challenging global environment has taken a toll on the economy with reduced exports and remittances; and significant capital outflows, leaving Sri Lanka with higher public debt, lower reserves and rising inflation.”8
These challenges coincide with the crucial period of Sri Lanka‘s political transition. The government may be forced to take unpopular measures in view of increasing public debt and a bloated, inefficient public sector carried over from the Rajapaksa years. According to the International Monetary Fund, Sri Lanka’s public debt had risen to over 74% of GDP by the end of 2015.9 This economic situation could turn up significant challenges for the current coalition as it risks undermining critical public support for the reform process, which explains in part why some reformers are keen to make rapid progress with the constitutional overhaul. In a country whose population is yet to benefit from the economic dividend of democratisation, the risks of economic challenges stalling or potentially derailing the transition process are high.

Overall, the relationship between political and economic challenges in Sri Lanka cannot be overstated: Throughout its recent history the country has paid a steep economic price for the instability which accompanied unresolved political issues and conflict. Only if the current reforms succeed and the new constitution is accepted by a significant majority of Sri Lankans can the country achieve the political stability that is necessary for sustainable economic development. Political reforms will, therefore, help the economy; however, the current state of the economy will not help the reform process.

In this context the government and business community are pinning their hopes, among others things, to a quick readmission to the European Union’s General Scheme of Preferences Plus (GSP+), which the EU withdrew in 2010 on the grounds of Sri Lanka’s human rights situation. While there is significant goodwill on both sides to see Sri Lanka readmitted to GSP+, the EU expects tangible progress on issues like the release of political prisoners and the return of land confiscated by the military.

The economic impact of readmission to GSP+ is likely to prove significant, with the EU being Sri Lanka’s biggest export market. In 2014 the EU accounted for 31% of Sri Lankan exports, two-thirds of which were textiles. If readmitted to GSP+ the textile industry would see a significant reduction in EU tariffs, dropping from between 10% and 6% to zero, and benefit from a considerable increase in competitiveness.10 Importantly, the textile sector, a key employer of women from poorer socioeconomic backgrounds, has a particularly important role to play in overcoming poverty and gender inequality, provided labour standards are respected. GSP+ requires that the government honours 27 specific international conventions that Sri Lanka has ratified, including 10 conventions related to labour standards.

The next 18 months of Sri Lanka’s transition will be crucial. Against the backdrop of a sluggish economy, the governing coalition will have to negotiate complex constitutional reforms requiring approval by referendum. While there is broad support for the reform process, the momentum may peter out before a constitutional bargain can be struck. In parallel, the process of transitional justice, which raises a number of potentially divisive issues of its own, must continue to address the past and to develop a new political culture for the country’s future.

The success of this transition process could propel Sri Lanka to a new level of political stability and economic prosperity, but the risks of a backlash and political turmoil are significant. International partners are well positioned to provide critical support to Sri Lanka at this time and play an important role in consolidating its democratic opening by locking in sustainable, long-term change. Ultimately, this is a strategic investment in Sri Lanka’s political and economic development, in conflict prevention and in the broader stability of the region.
– From the report READY FOR TAKE-OFF? THE PROMISE AND CHALLENGE OF SRI LANKA’S POLITICAL TRANSITION