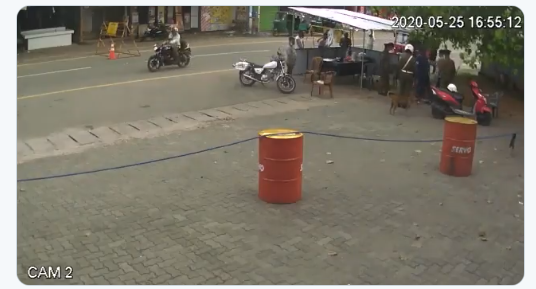 The news of the brutal assault by police on Thariq Ahamed, a 14 year old autistic boy of Dharga Town, Aluthgama is shocking and the prejudice that ensued after by the Police and the JMO needs to be exposed. Thariq was diagnosed with autism spectrum disorder since he was 4 and his development has been hindered by it since. Today, he has the capacities of a 6 year old child.

On the 25th of May, while curfew was imposed, Thariq had wandered out of his house on his bicycle and had ventured by the Ambagaha Junction in Dharga Town where there was a police checkpoint manned by 6-7 policemen. He was first stopped and accosted by a policeman in civvies, and pushed violently off his bicycle. Thariq, being autistic, naturally was not able to effectively communicate who he was and what he was doing there. Further according to his father, he was visibly terrified and disoriented. As he was pulled to his feet, another 5 policemen walked up and started brutally assaulting him, including slapping him across the face and blows to his head and torso. He was then dragged across the road towards the checkpoint and a nearby petrol station where another 2 civilians who stopped in a three-wheeler also joined the police in assaulting him.

All the while he was sobbing unintelligibly, given his circumstances which further infuriated the police. His hands were then tied behind his back as he was trying to struggle free, and then tied against a post under a tree, by the checkpoint. Several passers-by who stopped to witness the onslaught included a man on a motorcycle who knew Thariq and his father who thereafter proceeded to immediately fetch his father and bring him to the checkpoint. When the father arrived, he immediately rushed to his son and pleaded with the officers to release him explaining his son’s medical disorder and condition.

The officers there then verbally abused the father derogatorily and upon realizing that this child was in fact mentally ill, allowed the father to take his son away after forcing the father to agree that the fault was his in letting his son out of the house, in a bid to cover it up. Thariq suffered a cut on his head, and several on his back and arms, along with several bruises all over his body where he was assaulted by at least 8 grown men. The father, out of fear of reprisal from the police, was apprehensive to take Thariq to hospital that day as he was threatened by the police. Thariq meanwhile was terrified and was fearful to let anyone come near him immediately after the attack, and remains that way to this day.

After pressure from those who heard about the attack, the father proceeded to the local police station to file a complaint He was told there that the mistake was his in letting his son leave the house and no further action was taken. The father then proceeded to the Assistant Superintendent’s office, who was in charge of that area police division. While they took down a written complaint there it became obvious that no action would be taken. Thereafter, through the assistance of others the father was able to bring it to the attention of the Deputy Inspector General of the Kalutara district, who then passed along instructions for the boy to be medically examined and then take action accordingly. Thariq, his father and another policeman then went to meet the Judicial Medical Officer (JMO) at the Nagoda Hospital in Kalutara. Upon examining the boy, the JMO then passed on vile comments to the policeman asking him “why did you bring him here? He should be sent to Angoda. His kind (Muslims) are the reason why we are all wearing masks today. He deserved this and they should all be punished. I will show them.”

The JMO proceeded to refer Thariq to the psychiatrist at the hospital recommending that the boy be institutionalized at the National Institute of Mental Health in Angoda, as he had not taken his medication for several weeks. However, the JMO did not ask Thariq nor his father whether or not he had taken his medication. To their luck, the consultant psychiatrist happened to be the doctor who Thariq has been seeing for years, and as he was well aware that Thariq had been taking his medication regularly, and had been coming to him for clinics for years. Thereafter, he was prescribed his usual medication and released from the hospital and sent home. Since that time, there has been minimal reporting back from the police, in an obvious attempt to cover-up the incident but the father and others have managed to spread this story especially with the help of the CCTV footage of the incident.

It is important to note here that police brutality has been common in Sri Lanka for a while. It is only now, with the advent of social media and other technology that the police too have become more aware and are attempting to curtail such violence. However over the lockdown period imposed over last few months we have witnessed several incidents of police brutality against curfew violators islandwide. Thariq is all but one such incident, highlighted primarily because of his mental health & innocence Racial profiling like in this incident with the JMO, is also another serious infliction plaguing our country and needs to be brought to light. There are hundreds if not thousands of similar cases of injustice amongst innocent people who have been subject to discrimminationon the grounds of race, religion and ethnicity in our country.

While we raise our voices against police brutality and racial profiling in the United States, it is important that we highlight and question the rampant injustices happenning within Sri Lanka as well. Violence & racism occurring incessantly are precursors to a failed state, and if we are unable to give the unfortunate victims a voice then we are just as guilty as the perpetrators themselves. We see it on display in Sri Lanka and while we raise our voices for those persecuted in America, it is unto us to peacefully raise our voices against injustice, inequality and violence in our land too.

Just visited Thariq in Aluthgama. It’s a real shame that a child w. special needs had to experience such trauma & police brutality.

Despite it all, Thariq was exceptionally cheerful- a testament to his innocence. It truly was a pleasure to spend time with him. #JusticeForThariq pic.twitter.com/3UfCw7NWTR

However, the Police department also claimed that minimum force was used to stop and control Thariq Ahamed, a 16-year-old boy with autism, who was allegedly stopped and assaulted at a roadblock on 25 May.

The Police allege that Ahamed had ridden a bicycle through the roadblock without wearing a face mask and ignoring orders to stop, and headed towards Walipanna from Dharga town in Aluthgama around 4:45 p.m. and had returned in a short while and had attempted to ride past the Police without a face mask, while ignoring verbal orders to stop, prompting police to stop him physically.

CCTV footage of the incident was subsequently shared on social media, resulting in public outcry against police treatment of Ahamed. Issuing a press release in response, the Police Media Unit stated that no evidence to support allegations of assault against Thariq had been found as of last evening.

The Police claim that when attempting to force the suspect to stop, Ahamed lost control of his bicycle and collided with a fish vendor›s stall and fell over. «At that moment, the cyclist had screamed loudly and attempted to run away, prompting the Police to restrain him,» the statement said.

The press release states that the officers at first had suspected the ‹›well-grown›› cyclist to be a drug abuser due to his conduct but stressed that Ahamed was released into his father›s care without charge when the suspect’s medical condition was explained to them.

Following the public outcry for justice, the acting Inspector General of Police has directed the Colombo Women and Child Bureau of Police to launch a special investigation into the incident. A separate investigation under the supervision of the DIG for the Kalutara range has also been launched to inquire whether the Police officers had discharged their duties properly during the incident.

Further, according to the Police Media Unit, Thariq Ahamed had been subjected to a medical evaluation by the Judicial Medical Officer (JMO) of the Nagoda Hospital in Kalutara and a psychiatric evaluation at the same hospital. Both reports were pending as of last evening.