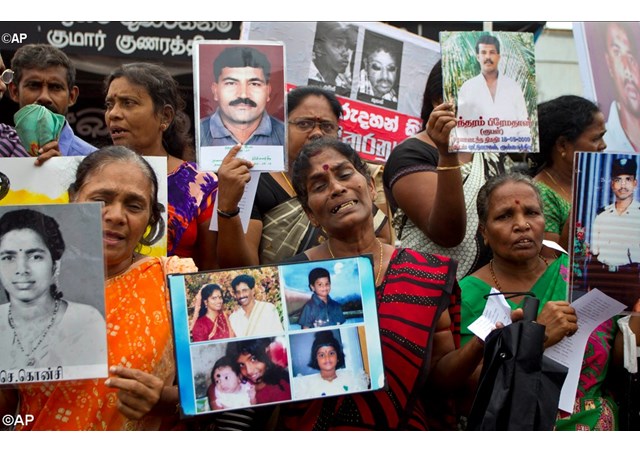 This article is a response to an article titled “International Convention on Enforced Disappearances violates the Constitution” published in a reputed newspaper The Island of 22nd October 2017, written by Neville Ladduwahetty. The crux of the argument in that article is that the definition of enforced disappearances as contained in the International Convention on Protection of all Persons from Enforced Disappearances is inconsistent with the Constitution of Sri Lanka.

A simple repudiation of that argument is that the Supreme Court of Sri Lanka has held that the definition of enforced disappearances as found in the Disappearances Convention is consistent with the Constitution of Sri Lanka. The Supreme Court in its declaration after examining the Bill on the Office of the Missing Persons (Establishment, Administration, and Discharge of Functions) Act, No 14 of 2016 as consistent with the Constitution of Sri Lanka has settled the matter already.

All the confusion that Neville Ladduwahetty has caused to himself and in turn has conveyed to the readers could have been avoided if he knew that the Supreme Court has already settled the matter for which he has taken a lot of labour to argue.

For all purposes, nothing more needs to be said in exposing the big error of this article.

What is said below is merely by way of explanation as to how the author has tried to misconstrue an argument against enforced disappearances being considered part of our law. This he has done by trying to compare Article 15(8) of the Constitution of Sri Lanka with the definition of enforced disappearances as defined in the relevant Convention. Article 15 of the Constitution is a very simple provision of law relating to ‘restrictions on fundamental rights’, which is found universally in all legal systems. In fact, Article 15 is based on Article 4 of the International Covenant on Civil and Political Rights which states as follows’

1. In time of public emergency which threatens the life of the nation and the existence of which is officially proclaimed, the States Parties to the present Covenant may take measures derogating from their obligations under the present Covenant to the extent strictly required by the exigencies of the situation, provided that such measures are not inconsistent with their other obligations under international law and do not involve discrimination solely on the ground of race, colour, sex, language, religion or social origin.

3. Any State Party to the present Covenant availing itself of the right of derogation shall immediately inform the other States Parties to the present Covenant, through the intermediary of the Secretary-General of the United Nations, of the provisions from which it has derogated and of the reasons by which it was actuated. A further communication shall be made, through the same intermediary, on the date on which it terminates such derogation.

Simply explained, it means that there could be some restrictions on the rights to be free from arrest, from illegal detention and the like, under some special circumstances.

However, neither international law on human rights nor the Sri Lankan Constitution allows concealment of arrest, detention or any restrictions of rights under any circumstances.

Sri Lanka’s emergency laws and anti-terrorism laws have prescribed some restriction on civil liberties under certain exceptional circumstances. However, neither the Emergency Regulations nor the anti-terrorism law has allowed ‘… a refusal to acknowledge the deprivation of liberty or by concealment of the fate or whereabouts of the disappeared person, which place such a person’s outside the protection of the law.’

It is not difficult to understand the difference between certain restrictions on civil liberties which may be lawfully invoked and those that cannot be so invoked.

To illustrate this point by way of an exaggeration, we may ask the author; does he think that under certain exceptional circumstances, cannibalism is allowed? Of course, any reasonable person would reply in the negative. But if we go by the view that under exceptional circumstances law enforcement agencies or armed forces may be allowed to do whatever they may want to do, then there is no basis to argue that cannibalism is an exception to that.

The legislature derives its power of making law within a democracy from the principle of sovereignty of the people. The sovereign people transfer to their representatives the power to make laws – in peaceful times as during times of conflicts – in order to ensure peace and security for themselves. What follows from sovereignty is the assumption that all actions done on their behalf must be done within the framework of rationality. A sovereign people do not give their representatives power to act barbarously. Sovereign people always act as civilised persons. Therefore, law makers cannot make laws that offend the basic norms and standards of a civilisation and give to law enforcement and armed forces powers to act barbarously.

The very essence of the offence of enforced disappearances is such concealment. When the fact of arrest or whereabouts of a person who is being arrested is considered a secret, the person so arrested is placed outside the protection of the law. Agencies of the State including the courts are required to take action for the protection of a person. They would need all the details about what has taken place relating to that person. When such information is required no one is allowed to state that ‘I am allowed by the law to conceal what I have done or what have I omitted to do’. Any person who makes such a claim obstructs the course of justice and therefore commits an offence. Thus, on matters relating to enforced disappearances, no officer of whatever the rank can claim the right to conceal what he or she knows.

The obligation to be accountable goes much further. All actions taken by officers acting on behalf of the State must be recorded. This is why a police officer engaged in arresting a person is supposed to take down in his pocket notebooks every action that has been taken in the course of an arrest. Later, these notes need to be transferred into official records that are maintained at a police station. Such measures are prescribed by law in order to ensure protection for all persons from unlawful actions. This implies that an officer acting on behalf of the State must all the time ensure that all actions that are taken are strictly within the law.

This article in fact lets out a well-entrenched ideological position that some political leaders and security agencies have firmly held over a long period – that, any and all kinds of restrictions could be imposed under some exceptional circumstances. This is a fundamental fallacy. Neither our constitution nor international law can be invoked to justify this fundamental fallacy. Our constitution is not a document that justifies barbarism. If it were to justify barbarism then it does not deserve the respect of any rational person. To claim that our constitution permits barbaric actions is in fact a grave insult, not only to the constitution but also to the sovereignty of the people who have authorised such a constitution.

The author’s thesis based on the Sinharasa’s case is irrelevant, because as said before the Supreme Court of Sri Lanka had already decided on the matter of legality and the constitutionality of the definition of enforced disappearances as found in the relevant Convention to be part of our law when the Court approved the Bill of the Office on Mission Persons Act No. 14 of 2016.