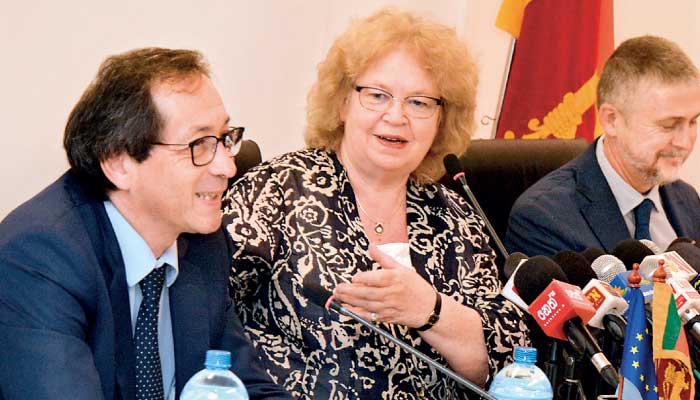 There appears to be a brisk uptick in the tone of visiting European lawmakers to Sri Lanka this week as compared to their sojourns last year.

Has realism dawned, too little, too late?

In November 2016, the delegation of the European Parliament departed the shores of the country saying that they were ‘pleased and impressed’ with the progress evidenced on ‘Human Rights and national reconciliation.’ Apparently among the reasons for this ‘pleasure’, was the issuing of circulars to military and police on respecting rights of detainees and suspects and ‘improvements in freedom of media, absence of censorship and the ability of civil society to operate more freely.’

Certainly only the prejudiced would not hail these as improvements of the Rajapaksa-status quo. That said, the Rajapaksa decade is no standard for measuring. Much more progress than circulars and the absence of white vans should have been evidenced by late 2016.

And let us be clear, the effusiveness indulged in by visiting delegations from the EU, UK or US in response to this Government’s performance has been majorly counter-productive during the past two years. If the assessments had been less uncritically glowing, tough national critiques of governance processes may have had wider space to breathe as it were. Now as the tension unravels in all but a few areas of the reform road-map, the dismay is evident but is this too little, too late?

One must not forget and disturbingly so, that the November visit of the European lawmakers last year was right before the unholy fracas over a draft Counter-Terrorism Act (CTA) which had been drafted in secret apparently with the ‘acquiescence’ (to be kind) of UN and EU agencies in Colombo despite their heated denials. This draft CTA was indescribably more oppressive than the existing Prevention of Terrorism Act (PTA).

Public uproar arose over its contents only after it was leaked to this newspaper, with successive drafts swinging like a yo-yo between bad and worse. In fact, as I pointed out in these column spaces at the time, analyzing these drafts came close to being subjected to ‘cruel, inhuman and degrading treatment’ as their contents inflicted grave distress given that they directly violated basic constitutional rights won through decades of hard fought legal battles in Sri Lanka’s superior courts.

A case in point was the inclusion of espionage in the early CTA drafts contradicting precedents of the Supreme Court on freedom of expression and information. Following protests, the draft clauses were hastily withdrawn but restored again in the later versions of the CTA. The term ‘espionage’ was sneakily withdrawn but the specifically dangerous and vague content of the offences including an overly broad definition of confidential information was brought back just the same under different headings.

Main priority should be to address system failures

This was disingenuous behavior calculated to arouse fury precisely because it sought to underestimate the rigour of public critiques of the draft. A similar tactic was used for introducing, withdrawing and then re-introducing the criminalization of writing or actions that offended ‘unity’ in the draft CTA, whatever that esoteric word may mean. Those potentially most at risk were journalists and critics despite shoddy protection of some kind for ‘registered’ media.

These worrying developments were in tandem with the refusal of state policy makers to ensure that ‘ordinary’ suspects in police custody had access to independent legal counsel immediately after arrest where the Criminal Procedure Code was concerned. Indeed, the resistance was such that it seemed that guaranteeing this right, commonly available in all advanced and most developing jurisdictions, would bring about a shocking breakdown of the criminal justice system.

But Sri Lanka’s criminal justice system has anyway broken down, not due to excessive liberality shown to suspects but due to excessive police brutality and entrenched systemic defects including laws delays. Instead of acknowledging this and devising policy and legal measures to correct that failure, we bury our heads in the sand and refuse to concede the truth.

What concrete and corrective measures have been taken?

In fact, the irony was that, if the EU had not linked the replacement of the PTA to their list of conditions for EU GSP Plus, we may not even have had a proposed CTA at all. The PTA was the known enemy, even with all its monstrous shortcomings. But its sins were used to justify a replacement law and then a draft worse than the existing law was allowed to emerge from a secretive drafting process in a deft sleight-of- hand. As cautioned in these column spaces previously, this must be seriously assessed by international agencies operating on much on the same ostrich-like principles as the Government.

This year, the mood of the visiting European delegation is certainly more irritable. We are told that there is ‘disappointment’ over Sri Lanka’s ‘slow roll-out of human rights reforms’ projected as a quid pro quo for EU GSP Plus trade concessions. Regressing from being ‘pleased and impressed’ to ‘disappointed’ within the short space of one year is a good indication of how precarious this system of checks and balances is.

But language aside, what concrete measures have been taken to ensure that another unseemly CTA draft is not again sprung on an unsuspecting public? This remains unclear. Pressed against the wall at the time, noises were made by the EU office and Government representatives about a collaborative process of revisions but little is known to the public. The draft CTA has vanished into the murky ether of the relevant Parliamentary Sectoral Oversight Committee and we are informed that a revised draft will emerge early next year. At least this time around, this draft must be made available for public feedback under the stamp of the Government.
Who answers for the agony of the wronged?

And there are substantive lessons to be learnt. Just recently a detainee held under emergency law for ten years was acquitted by the Colombo High Court. The Court rejected the confession given to the police, concluding that it had not been made voluntarily and finding contradictions between prosecution witnesses that went to the root of the case.

For one judge who goes meticulously into a particular case to ferret out these details, how many others will even bother? Even in this case, who recompenses the detainee for the years spent in prison, the torment and the agony?

These are pointed questions that misguided policymakers attempting to rest a system of justice on confessions given to police officers in circumstances of invariable coercion must ask themselves.