Sri Lanka: Systematic Attacks on Freedom of Expression and the Media Requires Specific Attention of the Human Rights Council 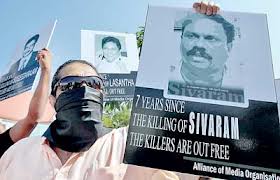 Attacks on freedom of expression in Sri Lanka, particularly against the media, continue to persist as journalists and civil society organizations in the country find themselves operating in an extremely restrictive and dangerous climate. During its 22nd regular session in March 2013, the Human Rights Council expressed concern about violations of the right to freedom of expression and the intimidation of journalists in Sri Lanka. The government’s own Lessons Learnt and Reconciliation Commission (LLRC) has also observed that it was “deeply disturbed by persistent reports concerning attacks on journalists and media institutions and killing of journalists”.
However, the government has indicated no level of commitment in this regard, opting not to support any recommendations pertaining to the freedom of expression during its recent Universal Periodic Review on 1 November 2012.

Attack on media houses
Over the last few years there has been a steady decline in the number of Sri Lankan media that publish or broadcast news critical of the government. The Jaffna based Tamil daily Uthayan Newspaper has consistently criticized the government and the military and has remained the most popular newspaper in northern Sri Lanka for many years. However its staff has been killed, assaulted, threatened and its premises and equipment subjected to attacks repeatedly, both during and after the war.

The constant attacks against Uthayan Newspaper have intensified ahead of the Northern Provincial Council elections scheduled for September 2013. On 12 April 2013, armed men entered the office and printing press of Uthayan and torched the building and newspapers that were due for circulation. It is the fourth incident this year that a Tamil-language newspaper or their distributors have been attacked in northern Sri Lanka. Earlier, on 3 April 2013, the Killinochi office of the Uthayan Newspaper was attacked by six masked men who entered the building before dawn, injuring the staff present and causing extensive damage to property.

Following these latest attacks, the Jaffna military commander was reported to have told media that the Uthayan is transmitting false propaganda to the international community with the intention of disrupting the mutual harmony built between the security forces and the people in Jaffna, and that Uthayan has joined hands with the Tamil National Alliance to trumpet the Tamil diaspora supporting the Liberation Tigers of Tamil Elam in spreading racism. Furthermore, in June 2012, the offices of the news websites Sri Lanka Mirror and Sri Lanka X news were also raided and their equipment confiscated.

Journalists in Sri Lanka run the risk of being arrested on frivolous and fabricated charges. There is a history of long imprisonment with bail being denied while lawyers and others supporting such journalists have been labeled as terrorists and subjected to intimidation. Despite the Sri Lankan constitution guaranteeing the freedom of expression, the Prevention of Terrorism Act (PTA) remains as a law that can be used to restrict freedom of expression significantly and intimidate journalists. Journalists belonging to Tamil newspapers in the north such as Uthayan and Valampuri are particularly vulnerable. On 20 March 2013, an Uthayan reporter was threatened by the military. On 8 March 2013, a journalist attached to Valampuri, another Jaffna-based Tamil newspaper was attacked and had to be hospitalized. On 15 February 2013, the camera of an Uthayan journalist was damaged by the military. In Colombo, Mr. Faraz Shauketaly, a journalist from the Sunday Leader was shot in the neck on 16 February 2013. Ms. Frederica Jansz who became the editor of Sunday Leader after the assassination of the founding editor, Mr. Lasantha Wickramathunga, was also subjected to intimidation and threats.

Journalists attempting to report about land occupation by the military and problems of displaced persons in the north have been threatened, intimidated, subjected to surveillance. People they had interviewed and local clergy assisting these journalists were also questioned and threatened. In July 2012, Mr. Shantha Wijesuriya, a journalist with the Lanka E-news narrowly escaped an attempted abduction. Several journalists and staff of pro-opposition news websites were arrested in 2012.

Restrictions on freedom of expression

The government of Sri Lanka vigorously controls the news and information particularly through State media. BBC Tamil service was forced to suspend its programming as of 26 March 2013 due to censorship by the Sri Lanka Broadcasting Corporation (SLBC).

The government has blocked websites that publish news critical of the government such as Tamilnet, Sri Lanka Guardian and LankaNewsWeb. BBC’s Colombo crew was also threatened and effectively arrested by a mob suspected to be part of the pro-government Bodu Bala Sena (BBS) group in February 2013, while the police stood and watched. The BBS leaders had also accused English language press who had been critical of their activities, of being sinful forces against the country.

Despite repeated assurances to the Human Rights Council, no convictions are known to have been handed down in relation to any of the past or ongoing attacks, including high profile incidents such as the repeated attacks on Uthayan, the assassination of Sunday Leader editor Mr. Lasantha Wickramatunga, the disappearance of Mr. Prageeth Ekneligoda and the brutal assault on journalist and press freedom activist Ms. Poddala Jayantha. The police and courts have been ineffective in preventing or responding to threats, attacks and restrictions on freedom of expression and opinion. Mr. Mohan Peiris In late 2012, foreign and local journalists covering issues like military occupation of land were prevented by the military to visit some areas even after obtaining clearance from civil authorities.

British Broadcasting Corporation (BBC), “BBC World Service Broadcasts in Sri Lanka on SLBC Suspended”, 26 March 2013, , a former Attorney General and the then-Legal Advisor to the cabinet of ministers told a Sri Lankan court in June 2012, that he doesn’t know where disappeared journalist and cartoonist Ekneligoda was living, just seven months after he had told the UN Committee Against Torture that Ekneligoda was living overseas.

The National Human Rights Commission (NHRC) has maintained silence on threats, attacks and restrictions on freedom of expression, despite statutory powers to investigate such incidents. The NHRC has not even tried to engage with well-known press freedom organizations in Sri Lanka. Despite repeated appeals by the wife of the disappeared journalist Ekneligoda, the NHRC refused to summon Mr. Peiris to clarify his contradicting statements to the UN in Geneva and Sri Lanka Courts. In another case of harassment filed by prominent press freedom activist Mr. Dharmasiri Lankapeli, the NHRC dismissed the complaint ex-parte, based on submissions by the alleged perpetrator, a leading state media institution.

Under-reporting of attacks due to fear

Many incidents related to threats and attacks on freedom of expression remain unreported in the pubic sphere due to the climate of fear. Amongst those not reported in 2012 are attacks on Tamil journalists and photographers in the north of Sri Lanka, intimidation of staff of a TV station and the repeated questioning and intimidation of two Sinhalese investigative journalists in Colombo.

More journalists critical of the government went into exile in late 2012 and early 2013. Senior journalists critical of the government, particularly those involved in campaigns for freedom of expression, human rights and democracy have found it difficult to find employment, as media institutions are reluctant to employ them. Except for a handful of courageous journalists and media institutions, most have subjected themselves to self-censorship due to fear. In light of these, FORUM-ASIA makes the following urgent calls to the Government of Sri Lanka to:

• Ensure independent investigations, prosecutions and convictions in all cases where journalists and media institutions were attacked;

• Refrain from using the Prevention of Terrorism Act (PTA) to restrict the freedom of expression and intimidate journalists, and repeal the PTA or bring it in line with international human rights norms and standards;

• End the arbitrary practice of blocking websites without due process;

• End all forms of attacks, threats and intimidation to press freedom activists and human rights defenders; and

• Extend an invitation to the UN Special Rapporteur on Freedom of Expression to visit Sri Lanka.

FORUM-ASIA further calls on the Human Rights Council to:

• Condemn the ongoing systematic attacks on freedom of expression and impunity for past attacks in Sri Lanka;

• Call for credible and independent investigations into all cases where journalist and media institutions have been attacked;

• Ensure effective support and protection to journalists and media institutions under threat as well as to journalists in exile (internally and externally) due to their independent journalism; and