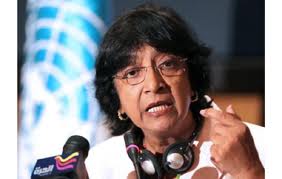 Pillay ended a fact-finding mission to the country to probe allegations of war crimes Saturday by saying Sri Lanka was a place where the rule of law had eroded and the independence of the judiciary was undermined.
“She came with a prejudiced mind and she is leaving with a prejudiced mind,” the Sunday Observer said in a front-page article headlined: “She hasn’t changed a bit.”

“She probably thought of the visit in some way as an opportunity to give credence to her preconceived judgements, and nothing else,” the paper added.

The rights chief accused military officials of harassing and intimidating priests, journalists and other civilians as punishment for meeting her during her visit.

“This type of surveillance and harassment appears to be getting worse in Sri Lanka, which is a country where critical voices are quite often attacked or even permanently silenced,” she said.

The government did not immediately respond.

Pillay’s visit was marred by personal attacks against her by government activists, including three government ministers.

She told reporters Saturday that President Mahinda Rajapakse had personally “apologised” to her for the abuse.

The privately-run, pro-government Sunday Island said Pillay’s claim that people were being punished for talking to her could not be accepted as “absolute fact,” but that the government must investigate it.
“The people have a right to know whether there had been any kind of intimidation as alleged and if so those responsible must be brought to account,” the Sunday Island said.

The Ceylon Today, a privately-run paper agreed that the government had made little headway in improving its rights record four years after crushing Tamil rebels and ending a drawn out separatist war in 2009.
Sri Lanka has resisted demands from the UN and Western nations for a “credible” investigation into allegations that up to 40,000 civilians were killed in the final months of the separatist war.
BR