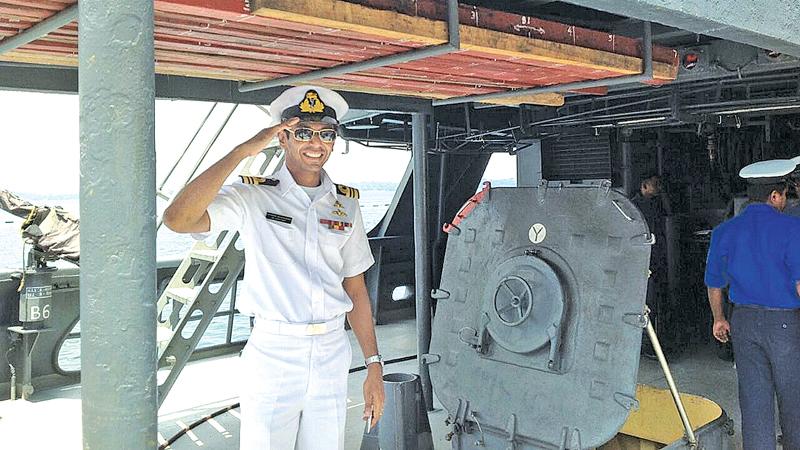 Image: Lt. Commander Krishan Welagedara.
Lt. Commander Krishan Welagedara provided damning evidence to CID sleuths in 2012, when he was able to help the agency to establish that the 11 youths abducted by a suspected navy gang were held in detention at Gun Site at the Trincomalee Naval Base. A Navy Intelligence officer, Welagedara was privy to the information because he had been tasked by his commanding officer in 2009 to determine if innocent people were being held at Gun Site on the pretext that they were terror suspects. His evidence not only helps to establish the boys’ last known location, but also tells a horrific story about how they might have met their end. Now he claims he has faced endless persecution within the Navy for telling the CID his story

On a small hill inside the Trincomalee Eastern Naval Command is known among local residents as ‘Gun Site’ because of a mounted weapon at its summit. A soundtrack of crashing waves, stunning views of the ocean side city of Trincomalee and the choppy blue waters of the Bay, would make ‘Gun Site’ a picturesque little hillock at the Naval Base if not for the eerie colonial era buildings that stand near the summit. The subterranean parts of the building get no sunlight and the darkness at night is only dispelled when the naval guards decide to switch on electrical lighting.

These underground detention cells are believed to be the place 11 young men, allegedly abducted by Sri Lanka Navy personnel for ransom, were last seen alive. Here, with the waves crashing overhead and salty winds carrying an evening chill even down to the subterranean holding cells, a key witness in the CID investigation claims to have seen Rajiv Naganathan, the 19-year-old university freshman from Kotahena, his friends, and other victims of the Navy abduction racket shortly before they disappeared forever.

Naganathan and four others were abducted exactly a decade ago, on September 17 2008. They were on their way to see another friend, Ali Anwer, when they fell prey to the abductors. First held at the naval prison known as ‘pittu bambuwa’ in Colombo Fort, the five boys abducted in September 2008 and several others taken between August-October 2008, were transferred a few months later to the Sri Lanka Navy’s ‘Gun Site’ holding cells, CID investigations have uncovered. Anwer, who was initially determined to be an informant to the abduction ring, was finally abducted himself and transferred to Gun Site with the other abductees.

When Lt. Commander Krishan Welegedara first met Anwer, his skull was cracked and bleeding and the boy was still bewildered about what had led to his own abduction at the hands of the gang he had been helping all along.

In evidence collected about the abduction racket so far, Lt Commander Welagedara is the CID’s star witness. According to Lt. Commander Welagedara’s statement to the CID, he met the abducted men between March – April 2009 – about six months after they were taken from their families. Despite being the 71st witness to the case, Welagedara’s revelations were damning, with top naval officials including Commodore D.K.P Dassanayake and Commander Sumith Ranasinghe only being further implicated in the case as a result.

Transferred to the Trincomalee Eastern Naval Command as its acting area Intelligence Officer on March 25, 2009, Welagedara had been tasked with seeking out information about those being held at Gun Site after being brought there by various intelligence units of the Navy by his superior officer, Admiral Guruge. Guruge was Director of Navy Intelligence at the time. Admiral Guruge had received information that innocents were also being held in detention on suspected terror activity, whereas the real aim of those detentions was to obtain ransom from the families.

Technically, Lt. Commander Welagedara did not have clearance to visit the holding cells. But he traveled to the site one day in civvies, accompanied by another sailor, in the guise of meeting a guard on weapon duty there. According to his evidence before the CID, this was the day that Welagedara first came into contact with the 11 men.

“They had been brought out to have a shower. Their hair looked overgrown and they did not look particularly well kept. One man, who later identified himself as Mohamed Ali Anwar, was injured badly, his head had split open after a severe beating. Anwer’s shirtless torso showed severe bruising. Anwer claimed he had been beaten in Colombo before being brought to Trincomalee” according to Welagedara’s evidence.

According to information provided by the Naval Intelligence official, Anwer had also revealed he had been an informant to the abduction gang, luring innocents to be entrapped. During his conversation with Welagedara at Gun Site, Anwer revealed the names of several of the main accused in the case, including Commodore D.K.P Dassanayake and Commander Sumith Ranasinghe, who were ranked Captain and Lt. Commander at the time, according to the CID B reports presented to court.

Welagedara was also able to recall seeing several of the abducted boys, including Rajeev Naganathan – who he said had curly hair and a small beard – and John Reid. Welagedara had claimed Anwer had profusely pleaded with him ensure their release.

Instructing an officer on duty to provide medical aid to Anwer who was in a bad state at the time, Welagedara returned to visit the site twice more. After a few visits, it became clear to the Lt Commander that the group being held at Gun Site were not terror suspects, but more likely innocent civilians. Each time, the young men told Welagedara their stories and pleaded for their release.

It was in May 2009 that Lt. Commander Welagedara rushed to Gun Site after being tipped off by one of the guards that gunshots had been heard near the detention facility. Racing there on a motorbike, Welagedara told the CID he had seen what looked like bodies wrapped in plastic sheeting being loaded into a truck. The intelligence official had no way of identifying those being loaded, but he told the CID that when he asked guards at the detention site later, they confirmed that they had never seen the group of boys since that fateful day. Reports about what he saw and heard at the eerie prison at the Trincomalee base were handed over to Admiral Guruge and the intelligence official continued to be in active service.

In 2012, Welagedara was dragged into the navy abduction case quite by chance, when Lt Commander Ranasinghe gave a statement to the CID in an attempt to implicate the naval intelligence official in the abductions case. Lt Commander Welagedara was first summoned to the CID to provide his version of the events. But his testimony proved damning. Welagedara was not only able to help CID sleuths to establish that the 11 men were being held at ‘Gun Site’ and identify them, but the extensive information he was able to provide about Dassanayake and Ranasinghe helped investigators to uncover various other misdeeds.

Welagedara went to his superiors when he was first summoned to give evidence before the CID. He had been assured protection and urged to cooperate with the law enforcement agency. But when his testimony broke the controversial case wide open, Welagedara was labeled a traitor, received several death threats and faced persecution and harassment within the Navy.

Last week, increasingly fed up, the Lt Commander filed a complaint with the Human Rights Commission of Sri Lanka citing persecution for being a witness in the controversial abduction case. He had also complained previously to the Navy and the CID about his home being under surveillance by intelligence groups sent by suspects implicated in the case.

In 2016, the Navy Lt. Commander even faced a court martial on a frivolous charge of being absent without leave. Welagedara’s wife, also an aeronautical engineer with the Sri Lanka Air Force had applied for and obtained Permanent Residency (PR) in Australia.

The Naval official believed the best course of action, given his involvement as a witness in the high profile abduction case, was to ensure his family could be safely harboured overseas. Despite repeated attempts to obtain leave from the Navy to go to Australia in order to settle his family, the requests were turned down. Desperate and running out of time on the PR, in March 2016 Lt Commander Welagedara decided to travel overseas while on regular local leave. Two days after arriving in Australia, on March 28 2016, Welagedara told his superior officer Commodore Y.M. Jayarathna that he was overseas and communicated the anticipated date and time of his return to Sri Lanka.

But as soon as he arrived in the island, the Lt. Commander was arrested, handcuffed and thrown in Navy prison for 14 days. To his shock, given how minor the offence was, Welagedara was informed he would be facing a full court martial, as opposed to a summary trial as is usually the case for minor misdemeanors within the force. The Navy was trying him for acting in a manner prejudicial to naval discipline and good order, and being absent without leave.

Notably, CID Director SSP Shani Abeysekara in August providing a detailed description of facts stated in B-report (B/732/2009) presented in court, claimed that the same Shavindra Fernando PC who was then serving as a Deputy Solicitor General of the Attorney General’s Department had attempted to impede the CID investigation into the navy abduction racket. Fernando PC had been seconded by the AG’s Department as JAG for Welagedara’s court martial in 2016.

Days later, President Maithripala Sirisena pardoned Lt. Commander Welagedara of several guilty charges. In a letter (Ref: No: MOD/DET/03/02/DIS/315) dated July 29, 2018 addressed to the Navy Commander, then Defence Secretary Karunasena Hettiarachchi notified the Navy of the presidential directive that Welagedara’s punishment was to be slashed to only 17 days forfeiture of his seniority for being absent without leave.

But despite the presidential waiver of punishment, Sunday Observer learns from authoritative sources that to date Lt. Commander Welagedara continues to be denied promotions and requests for early retirement with pension on the basis of his court martial in 2016.

This is despite the fact that even Sri Lanka Navy deserters who have gone missing for over 100 days, have returned to receive lighter punishments – such as losing 14 days of seniority, Sunday Observer learns. Meanwhile, Commodore D.K.P. Dassanayake and Commander Sumith Ranasinghe, both suspects in the abduction racket case, currently out on bail, were granted promotions to their current ranks in 2016 with Dassanayake receiving a service extension in July 2018.

It is unclear why the naval intelligence official staked his career to provide this testimony to the CID about what he saw at Gun Site, Trincomalee. Perhaps it was the assurances by his senior officers that he would be protected for telling the CID what he saw. Or because what he believes he witnessed in Trincomalee from March-May 2009, were grave crimes against innocents, perpetrated by those sworn to protect and defend Sri Lanka and her people.

Whatever his motivation, for his trouble, Lt. Commander Krishan Welagedara is paying a heavy price.