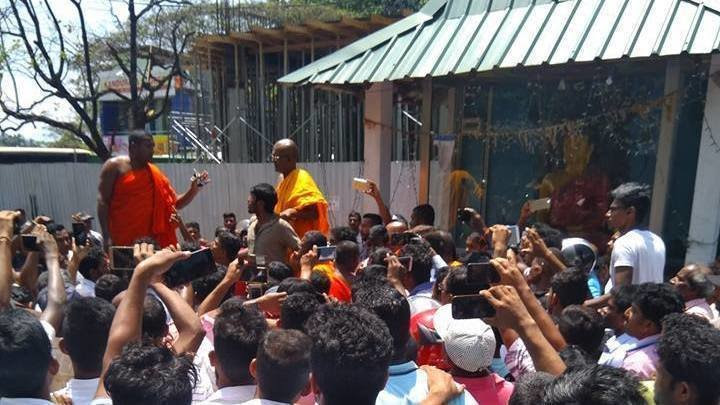 MAR 7, 2018 — On March 6th, 2018, despite a State of Emergency and curfew being declared, there were several reports of attacks[1] against the Muslim community and damages to mosques by Sinhala mobs in the Kandy district.

On 22nd February, an altercation allegedly took place between a group of drunken men, identified later as Muslims, and a Sinhala man. The group had assaulted the man for attempting to overtake a three-wheeler, and after 10 days in the ICU of the Kandy General Hospital, he succumbed to his injuries on March 3rd. Though there are various claims of the actual reason for the altercation, none were related to any racial or ethnic motives. The perpetrators have been taken into police custody and arrested. Discussions among local religious leaders and law enforcement ensured that this issue would not be allowed to spiral into racial tension.

It is suspected that the atmosphere changed after March 4th when Sinhala mobs came in buses from other parts of the country, and coincidentally four prominent anti-Muslim extremists (BBS leader Gnanasara thero, Mahason Balakaya leader Amith Weerasinghe[2], Dan Priyasad and Ampitiye Sumana thero[3] from Batticaloa) went to Kandy. On March 5th, a mob caused widespread property damage[4], to homes, shops[5] and mosques, and on the morning of March 6th, the body of 24 year old, Abdul Basith was found inside one of the damaged properties.

In a previous incident, on Monday February 26th, a group of Sinhala youth alleged that ‘sterilization pills’[6] were added to a meal served by a Muslim-owned restaurant to a Sinhalese customer. This racially-charged allegation resulted in four shops[7] and a mosque being damaged and at least three persons being injured in a clash, when a Sinhala mob went on rampage in Ampara town on the early morning of 27th February. Prime Minister Ranil Wickramasinghe ordered an investigation on the conduct of the police in this matter as the suspects of the violence had been produced to courts and bailed without objection from Police. Police reinforcements and the STF were deployed to the area.

The Ampara incident was caused by blatant misinformation shared on social media on the existence of a sterilization pills being disseminated by the Muslims to render the Sinhalese infertile. In the time between these two incidents, several media outlets have recorded instances of incitement to violence[8] by Buddhist monks or those claiming to be Buddhist monks. These videos decry the take-over of the “Sinhala country” by Muslims, and instigate the Sinhalese to rise up against the Muslim community, as otherwise they too would be complicit in allowing this “takeover” to take place. There are direct calls to injure and kill Muslims. Some messages shared on WhatsApp show large-scale organizing of groups to certain areas to intimidate the population.