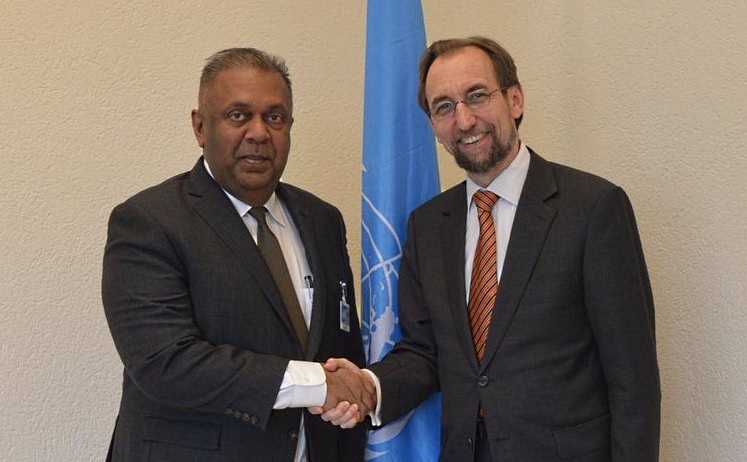 GENEVA (3 March 2017) –The slow pace of transitional justice in Sri Lanka and the lack of a comprehensive strategy to address accountability for past crimes risk derailing the momentum towards lasting peace, reconciliation and stability, according to a report issued by the UN Human Rights Office today.

The report acknowledges that there have been positive advances on human rights and constitutional reform. “The Government has advanced on constitutional reforms and showcased some positive developments on the broader human rights agenda. The fulfilment of transitional justice commitments has, however, been worryingly slow, and the structures set up and measures taken during the period under review were inadequate to ensure real progress,” the report states.

The report, which was mandated by the UN Human Rights Council to assess progress made in tackling the legacy of grave violations in Sri Lanka between 2002 and 2011, commends the constructive engagement of the Government of Sri Lanka with the UN’s human rights bodies, marking a discernible change in policy. It also recognizes some advances on constitutional reforms, on crucial issues like land restitution and symbolic gestures towards reconciliation, as well as legal reforms and the design of an Office of Missing Persons. The laudable, inclusive work of the Consultation Task Force on Reconciliation Mechanism, appointed by the Government, has also resulted in an incisive report, which was issued in January this year.

However, the report by the UN Human Rights Office notes that the structures set up and measures taken until now have been inadequate, lacked coordination and a sense of urgency.

“Party politics, including the balancing of power between the different constituencies of the coalition in the run-up to constitutional reforms, have contributed to a reluctance to address difficult issues regarding accountability or to clearly articulate a unified position by all parts of Government. Unclear and often contradictory messages have been delivered on transitional justice mechanisms. Public messaging around transitional justice and reconciliation has been generally confusing and at times contradictory,” the report states.

UN High Commissioner for Human Rights Zeid Ra’ad Al Hussein noted that in many ways, Sri Lanka appears to be turning a corner on the promotion and protection of human rights, but he stressed that hard-won gains could prove illusory if they are not tethered to a comprehensive, robust strategy.

“Seventeen months ago, when we published a detailed report* on the grave human rights violations committed during the conflict in Sri Lanka, I urged the Government and all the people of Sri Lanka to ensure that this historic opportunity for truly fundamental change should not be squandered,” High Commissioner Zeid said.

“This critical opportunity in Sri Lankan history cannot be missed. I urge the Government and people of Sri Lanka to prioritize justice alongside reconciliation to ensure that the horrors of the past are firmly dealt with, never to recur.”

The report makes a number of concrete recommendations, including calling on the Government to embrace the report of the Consultation Task Force, to formulate a communications campaign to inform the public about details of the reconciliation agenda, to invite the UN Human Rights Office to establish a presence in Sri Lanka, to give the highest priority to the restitution of all private land that has been occupied by the military, and to adopt legislation establishing a hybrid court.

The report also highlights a number of serious human rights violations that are reportedly continuing to occur in Sri Lanka, including the harassment or surveillance of human rights defenders and victims of violations, police abuse and excessive use of force, and the use of torture. The Human Rights Commission of Sri Lanka has stated that the complaints it receives indicate the “routine use of torture by the police throughout the country as a means of interrogation and investigation.” The report notes that the “prevailing culture of impunity for perpetrating torture has undoubtedly contributed to this situation.”

“The authorities at all level, from the head of State to military, police, intelligence and local-level leaders, need to publicly issue unequivocal instructions to all branches of the military, intelligence and police forces that torture, sexual violence and other human rights violations are unequivocally prohibited and will be punished,” Zeid said. “And such violations need to be promptly investigated without fail. This is essential to regain and retain the trust of all Sri Lankans in the authorities, and to reassure them that the State exists to protect the rights of all its people.”

The High Commissioner will present the report to the Human Rights Council on 22 March in Geneva.

The report is available on: http://www.ohchr.org/EN/HRBodies/HRC/RegularSessions/Session34/Documents/A_HRC_34_20_EN.docx
ENDS

* The 2015 report by the UN Human Rights Office is divided into two parts which are interlinked:

1)        The overarching Report of the Office of the United Nations High Commissioner for Human Rights on Promoting Reconciliation, Accountability and Human Rights (A/HRC/30/61): http://www.ohchr.org/EN/HRBodies/HRC/RegularSessions/Session30/Documents/A_HRC_30_61_ENG.docx
2)        The accompanying report of the OHCHR Investigation on Sri Lanka (A/HRC/30/CRP.2):http://www.ohchr.org/EN/HRBodies/HRC/RegularSessions/Session30/Documents/A_HRC_30_CRP_2.docx