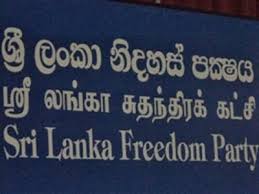 Sri Lanka Freedom Party (SLFP) has decided to oppose any meaningful constitutional reform and any power sharing going beyond the 13th amendment.

This position has been elaborated by SLFP ministers at a meeting with leading Buddhist monks heald at All Ceylon Buddhist Congress (ACBC)  headquarters in Bauddhaloka Mawatha reports Sunday Times.

“Seven SLFP ministers who took part in the two-hour talks made clear their party’s position in respect of the proposed constitutional changes. Among the highlights were:

The SLFP will ensure that the foremost place is given to Buddhism.
The unitary status of Sri Lanka will be protected.
The SLFP will not support any Constitutional change that requires a referendum.
There will be no change to the Executive Presidential system.
There will be no merger of the Northern and Eastern Provinces.
Devolution of power will only be through the fuller implementation of the 13th Amendment to the Constitution.

Minister Nimal Siripala de Silva explained that agreeing to a referendum at this juncture would only divide the country. Ven. Tirucunamale Ananda Thera declared that the same position has been explained to a delegation of Buddhist clergy including himself when they met President Sirisena. He praised the President for taking such a position. Though the SLFP position was that maximum devolution should be through the full implementation of the 13th Amendment to the Constitution, the prelate said they held a different view. He noted that there was provision in the 13A for a provincial police force where the Deputy Inspector General of Police in a province will come under the Chief Minister. They were not in favour of such a situation for it would politicise the Police in the provinces. Minister de Silva was to point out that such issues could be further discussed.

Thursday’s meeting between the seven SLFP ministers and a delegation from the ACBC has added to uncertainty over constitutional reforms. The United National Party (UNP), the other constituent partner in the Government, has been spearheading a reform package. Reports of six different Steering Committee reports on the proposed changes were to be debated in Parliament from January 9 to 11. It was indefinitely put off since the SLFP participants in the process sought more time to study the matter.

“The SLFP and the UNP are now at loggerheads over constitutional reforms. Until they find common ground, these reforms will be in limbo,” ‘Joint Opposition’ leader Dinesh Gunawardena told the Sunday Times. He added, “As a result, we have not been able to agree on a date for the debate.” It is quite clear we will not be able to proceed since the two sides are taking divergent and irreconcilable positions, he pointed out. The veteran Mahajana Eksath Peramuna politician said it was imperative that the two main partners in the Government tell the people what their positions are, instead of leaving the country in suspense.

The position taken up by the SLFP ministers is largely similar to the position taken up by the ‘Joint Opposition’. The 14-point proposals it submitted to a Steering Committee said that there should be no merger of the Northern and Eastern Provinces. They also say that there should be no change to Chapter II, Article 9 of the Constitution that; “the Republic of Sri Lanka shall give the foremost place to Buddhism”. They have said that the Provincial Councils system shall not endanger the Unitary State and its security and added that PCs should exercise their powers subject to the executive and legislative powers of the Centre.

Former President Mahinda Rajapaksa also came out strongly against the six reports of Steering Committees appointed by the Constitutional Assembly. In a statement last month he noted that “During the last presidential election campaign, the two main constitutional reforms promised to the people by the Government were: the abolition of the executive presidency and the reform of the electoral system. Neither of these two key issues has been dealt with by the subcommittees appointed by the Constitutional Assembly. Instead, six reports have been released on matters that were never even mentioned during the presidential election. It is only in reading the subcommittee reports that the connection between the above mentioned events become clear. The subcommittee on “Centre-Periphery Relations” has openly stated that the ‘unitary character’ of our constitution is an ‘impediment’ to the functioning of the provincial councils and some of the reports have made recommendations that are designed to end the unitary character of Sri Lanka without however deleting that word from the Constitution…”