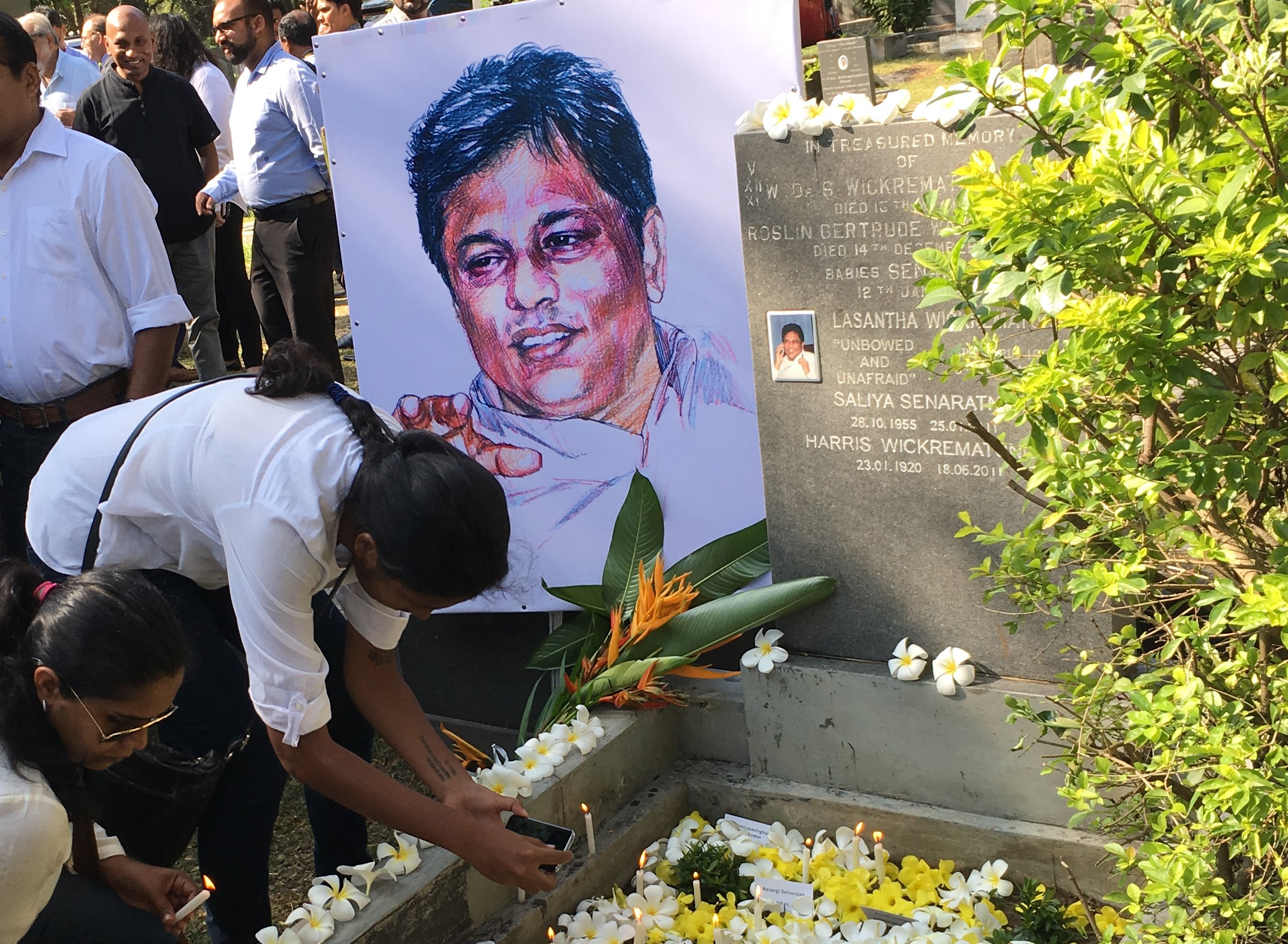 Ten years after top newspaper editor Lasantha Wickrematunge was killed by a suspected government death squad the failure to secure a prosecution has come to highlight Sri Lanka’s struggle with a dark past.

Just days before he was due to give evidence against the brother of the country’s then strongman leader Mahinda Rajapakse, two assailants on motorcycles blocked the car of the 50-year-old editor of the Sunday Leader newspaper before smashing the windows and stabbing him in the head.

The assassination is one of many unresolved killings of journalists carried out during Rajapakse’s decade in power — which also saw a 37-year conflict with Tamil separatists brought to a brutal conclusion, raising other ugly, unanswered questions.

Journalists and relatives will hold a vigil at Wickrematunge’s grave on Tuesday, to put a new spotlight on the case that drew US-led condemnation.

“Lasantha’s case attracted international attention, his killing was condemned globally, but we have not been able to secure justice yet,” Free Media Movement (FMM) spokesman C. Dodawatte told AFP.

“We want to use the tenth death anniversary to step up a campaign for justice for the dozens of journalists killed in the past two decades,” Dodawatte added.

Before his death Wickrematunge — who endured years of harassment and intimidation for his work — had uncovered corruption in a multi-million dollar purchase of second-hand MiG planes from Ukraine implicating Rajapakse’s brother Gotabhaya, a top defence ministry official at the time.

Critics say the investigation into the killing has been a litany of deliberate sabotage and misdirection.

A doctor who performed the first autopsy reported that Wickrematunge was shot dead. But a second examination after the body was exhumed in September 2016 said he had been fatally stabbed in the head.

Furthermore, a deputy inspector-general of police who was initially in charge of the case was arrested for trying to destroy evidence before being released on bail, while the then-head of military intelligence was taken into custody for his alleged involvement in the killing.

After Rajapakse lost a 2015 election, a breakthrough in the case saw investigators inform a court that army spies had been responsible for Wickrematunge’s killing.

A former army commander accused Gotabhaya in court of running a secret unit used to target journalists and dissidents during his brother’s presidency.

Gotabhaya has denied any link to the killings and remains under investigation for corruption related to the MiG deal.

Rajapakse staged a brief return to office last year amid a power struggle between the president and prime minister.

Shortly after his return, the lead investigator in the Wickrematunge case was transferred, sparking alarm among rights groups.

As the crisis dragged on, Amnesty said in November it was concerned about the “seeming interference by the authorities” into investigations into attacks on journalists and human rights violations during the civil war.

“Justice in these cases is long overdue,” it added.

Following widespread protests, President Maithripala Sirisena restored the investigator and Rajapakse was forced out of office.

In a letter released to the media ahead of the anniversary of her father’s death, Wickrematunge’s daughter Ahimsa, who lives in Australia, said she had full confidence in the investigators.

But she doubted whether they would be allowed to do their job given Sirisena’s new political alliance with Rajapakse.

“It becomes clearer by the day that covering up the truth of the MiG deal was literally worth a killing,” she said.

Sirisena came to power in 2015 promising accountability for atrocities during the Tamil war as well as to reopen the investigations of media murders under the Rajapakse regime. Activists say he has failed to deliver.

Four months after Wickrematunge’s murder, Sri Lanka’s 37-year-long Tamil separatist war came to a bloody end. The rebel leadership was wiped out while some 40,000 Tamil civilians were also killed in the final months of fighting.