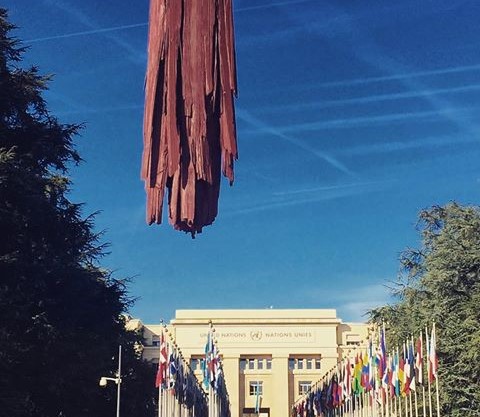 Image:  Land mine treaty symbol in front of UNHRC, Geneva.

Sri Lanka has recently acceded to the Optional Protocol on the Convention against Torture that allows for greater international scrutiny of a country’s detention facilities and the Ottawa Treaty to ban landmines. Previous Sri Lankan governments had resisted acceding to these international instruments on the grounds of national security even while agreeing to their content in principle. The National Peace Council welcomes the government decision to accept the challenge of governance in the future according to international standards.

The main feature of the mine ban treaty is that it bans anti-personnel landmines, requires destruction of stockpiles and the clearance of mined areas, and assistance to victims who have suffered landmine injuries. The mine ban treaty is forward looking in that it prohibits the future use of antipersonnel land mines. It does not deal with the past except to provide assistance to those who have become victims. The Optional Protocol of the Convention against Torture permits visits by independent international and national bodies to places of detention in order to prevent torture and other cruel, inhuman or degrading treatment. This too is a forward looking commitment as it seeks to ensure that present practices do not permit torture and the violation of human rights.

The focus on the future has also made it easier for both the government and security forces to accept. The progressive attitude of the Sri Lankan security forces in regard to international standards has been facilitated by the end of the war. It is the past that is troubling, in which human rights violations and war crimes occurred. The challenge for the government and for the security forces would be to accept the commitments to deal with issues that continue from the past. The commitments made by the government in Geneva before the UN Human Rights Council in October 2015 are about dealing with the past. The transitional justice mechanisms pertaining to truth seeking, finding missing persons, reparations and accountability are important to the victims.

The slowness with which the government is implementing promises made in regard to human rights and justice issues that arose in the course of the war and post-war period have led to doubts about the government’s intentions in regard to the implementation of those commitments. The delay has been protracted even when it comes to setting up the Office of Missing Persons. The legislation was passed over a year and a half ago. But the institution has still to get off the ground and the commissioners have yet to be appointed. The National Peace Council urges expedited implementation of these mechanisms. The government’s paradigm shift in acceding to the international agreements that previous governments failed to suggests that this is now possible and will be done.