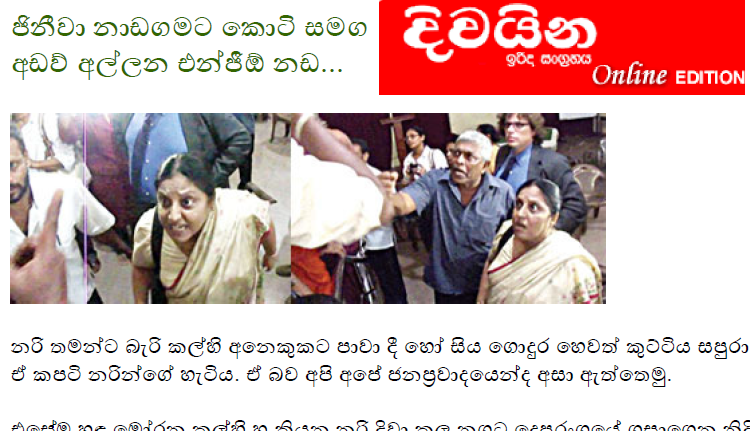 Following translated article is an example of how Sinhalese people are fed with half truthsmixed with lies and total lies on UNHRC investigation on Sri Lanka and progressive civil Society groups in the country. This was published in Sinhala nationalist Divaina Sunday edition on 10 august 2014. Divaina is published by the Upali Newspapers in Sri Lanka. The article also shows the hate attacks Sri Lanka HRDs face today. The newspaper company is closely related to the Rajapaksa regime by ownership as well as editorial policy.

When they can’t do it alone the shrewd foxes will even betray anyone to get their share. That is the way of the foxes. We have heard about them in our folklore.

Similarly we know the foxes who howl on seeing the moon will sleep during the day with their tails between the legs. As Sri Lankans we know this because we have a good understanding about the nature.

We also know fox is similar in shape to the dogs we have at home, but it is a wild animal who does not love us like the dogs. That is why foxes are still in the forest while dogs are closer to man.

However what can we do if some buffoons who have this ‘jackal mentality’are presently betraying the motherland for American dollars or Sterling pounds and for their own benefit.

Clearly what should be done is to shoot them and throw them to the forest for the foxes to eat. But we won’t say that should done, because we do not have the tribal mentality of those who betray the country.
Although that is not possible, there is one thing we can do. That is to expose their pedigree from birth so that the country will know about these two legged foxes

Leaving aside all what they have done up to now, these unpatriotic elements have commenced the latest round of their disgraceful operation of betraying the country in a strange way. This wretched group have pasted a ”Human rights activist” label on the loin cloth meant to cover their nakedness and hung it round their necks.. The naked foolery played by them as Non-Governmental Organizations with an eye on foreign dollar bags should not be taken lightly.

There is a tragic memory that people will never forget even after their death. That is the memory of terrorism unleashed by Velupillai Prabakaran for over three decades in order to achieve his dream of Eelam.

During this period there are innumerable instances where we cried as a nation. We made many sacrifices. During those thirty years as Sri Lankans, we had to make all the sacrifices history demanded from us.

However we were able to enjoy the results of our sacrifices at the end. This happened with Mahinda Rajapaksa regime coming to power in 2005. The terrorism of Prabakaran which was a menace to the whole country came to an end. Peace arrived. It is not necessary to explain to anybody with a brain that this was achieved overcoming many obstacles from local and foreign sources.

But did the international forces which defended the LTTE become silent? No. The western camp led by America, who weep for Prabakaran, is presently engaged in a massive conspiracy to isolate us by bringing various charges and complaints on violation of human rights and mass killings.
It is no secret that in this endeavor they are using the United Nations Organization of which Sri Lanka is a member as the battle ground to launch the attack against us.

This is clearly visible by the appointment of a United Nations Inquiry Panel for Sri Lanka by the former United Nations Human Rights Commissioner Navanethan Pillai in accordance with the American resolution . This resolution is a culmination of step by step accusations leveled against us by the western conspirators led by America who dance according to the Tamil Diaspora, the citizens of a shadow Eelam established to get over the sorrow on eradicating LTTE.

We have a question to ask from the western camp led by America. How do you accuse us on human rights violations when you are silent on the mass killings by Israel in the Gaza strip?

Navi Pillay and Tamil Diaspora
An incident that took place last week in Geneva clearly showed the hypocrisy and insincerity of Madam Pillay who danced to the American tune in appointing the Inquiry panel.

This happened at an event held in Geneva by number of voluntary organizations as a farewell for Madam Pillay who went on retirement. The vast majority of the participants at this farewell function were the members of the pro –tiger Tamil Diaspora who are domiciled in the west.
The reports from Geneva confirmed that there were 13 powerful LTTE members presently living in France and Britain at this function. What happened there is also amazing. Madam Pillai was received by the LTTE terrorists by enrobing her with a golden cloth.
Isn’t this enough to show her independence and anti American attitude? LTTE terrorists honour Pillai by enrobing her with golden cloth.
At this function addressing the pro LTTE Tamil diaspora, Pillai made a strange statement which showed her independent stand. She requested the Tamil diaspora to continuously assist the Geneva inquiry by providing evidence against this country.
We have one thing to tell Madam Pillay. Although she doesn’t know we have a valuable saying in our folklore for such things.- “Even Cats provide evidence for milk”

Pillay and west does not have evidence
Although an international inquiry panel has been appointed to investigate the human rights violations during the last stages of the war, it is no secret that madam Pillai and the western camp is finding it difficult to collect the evidence. Investigation Committee is unable to find any direct evidence

The main reason for this situation is the decision by Sri Lanka, not to give permission to come to the country to gather evidence and the refusal by the Indian government to conduct the investigation from there.

Therefore not only the western camp led by America but also retired Madam Pilly and her investigation committee is presently adopting other strategies to collect direct evidence.

As we have stated earlier this unpatriotic jackals are dancing naked in front of the dollars with their ‘human rights activist ‘loin cloth round their necks. Today they are conducting an operation to betray the country by collecting evidence for Pillay’s committee.

At every stage of this conspiracy led by America against this country, this disgraceful group was the partners. Today they are coming forward with the slogans of “media freedom” and “human rights”

Money for giving evidence
We state with responsibility that there are about ten Non-Governmental Organizations operating within the country and depending on the dollars given by the foreign sources. Is their aim is to collect evidence for the Geneva inquiry? No. They are also engaged in a conspiracy to topple the Rajapaksa government. They also have a plan to destabilize the country.

It has been revealed that commander of this operation is the American Centre and the Embassy by giving bundles of dollars to the Non- Governmental Organizations. It became further evident when American Centre got caught in implementing political operation.

The incident last week at Maradana confirmed that embassies of two or three western countries are also partners in this operation .

In this operation of destabilizing the country, it is clear that these activists from Non-Governmental Organization consisting of unpatriotic elements and aligned with relevant embassies are implementing their programme in number of ways.

Jouranlists as traitors
The main methodology adopted by them is to invite young people as journalists under the label of mass media freedom and offer them various presents including money and mobile phones and get them to join as partners of this conspiracy.

During the recent past they have conducted more than twenty five residential workshops. The most serious aspect of this operation is getting the terrorists connected to LTTE to be partners in their conspiracy under the label of journalists.

As an example a person known as Dayabaran who was a store keeper at the Jaffna Municipality some time back and was a known terrorist participated at a workshop held about three weeks back at Narahenpita organized by the Free Media Movement.

A patriotic organization activist has already made a complaint about the terrorist Dayabaran to Colombo Crimes Division. Who is this Dayabaran?
Dayabaran has been identified by the security forces as a main partner responsible for a bombing incident at Hindu lodge on 11th September 1998 where five persons including Pon Sivapalan, Jaffana Mayor and Major General Susantha Mensis were killed and 30 others were injured.

According to the security sources Dayabaran has planned this attack with Elamurugan and Sabesan who were leaders of LTTE. Ratnasingham who was the Public Relations Officer at Jaffna Municipality has also joined them to carry out this attack.

Later Dayabaran has worked for the Tamilnet web site providing information and is now working as a clerk at the Education Dept. Jaffna.

An incident that took place at the Centre for Society and Religion at Maradana last week also confirmed that these unpatriotic Non-Governmental Organizations are launching a conspiracy to betray the country with the support of members of the LTTE and the so called Mahaviru families of the LTTE.

Last week on the pretext of collecting information these traitors have invited about sixty members from so called Mahaviru families. While this programme was going on an organization known as “ Disappeared Persons Parents Collective” which has been active since 2011 also has gone there with Maha Sanga’

Since the organizers did not respond to this request a contentious situation developed. The media reported members of the Parents Collective having an angry exchange of words with the group including Nimalka Fernando who appears as a Human Rights Activists not only in this country but also at Geneva.

Here we also have a question to ask from these Humanists including Nimalka Fernando. Is it only the members of Mahaviru families of LTTE that disappeared during the past? We want to ask whether Nimlaka Fernando and the group think that LTTE terrorists were not responsible for the disappearance of people in the north as well as in the south.

However this incident ended with going to the Maradana Police station. But cat was out of the bag when vehicles with officials from three western embassies including American Embassy arrived there.

Today this is how these foxes are dancing naked betraying the country for bundles of dollars saying that they are Humanists. They have pasted the label” Non –Governmental Organizations” on their loincloths which is round their necks. We have no issue with anybody dancing naked. The problem is while they are dancing naked they are trying to remove the cloths of mother Lanka as well.

We have a question to ask from the government. Did the people voted them to power just to idle in front of this buffoonery?
[Sub headings by the SLB]