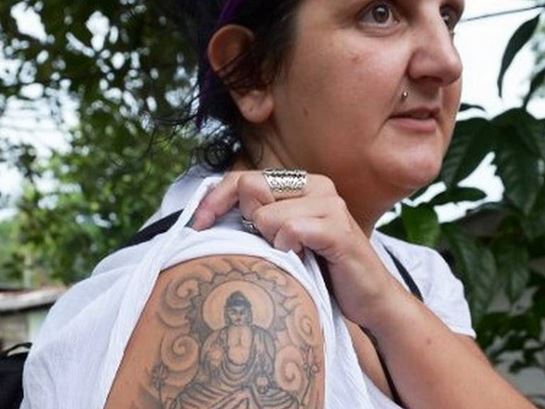 The Supreme Court today awarded a total of Rs.800,000 — Rs.600,000 as compensation and Rs.200,000 as cost–to Britisher Naomi Coleman who was arrested and deported for having a Buddha tattoo on her right upper arm.

The Judgement was delivered after more than a dozen postponements because the Supreme Court bench not being constituted. The case was argued and concluded and order reserved for Judgement on June 10, 2015 after which Justice Chandra Ekanayake retired. Thereafter the case had to be re-argued.

The SC held that her fundamental right to freedom from torture, right to equality and freedom from arbitrary arrest had been infringed upon.

It said the police had misrepresented facts and misled the magistrate into believing the submissions that had been made and that a deportation order could be made by that Court.

She said as a practicing Buddhist she attends meditation retreats in Nepal, Thailand, Cambodia and India and as an apt tribute to and as a personal expression of her devotion to Buddhist teachings had on her right upper arm displayed a tattoo of the Buddha seated on a lotus flower.

She said she arrived at the Bandaranaike International Airport and when she was at the exit gate attempting to locate the luggage counter, she was approached by a taxi-cab driver later identified as Kelum Chaminda and a bystander who said the tattoo might be objectionable in Sri Lanka.

She said they took her to Katunayake Police Station where the Acting OIC confiscated her passport produced in Court without disclosing the charge against her or the offence committed and was not afforded an opportunity to communicate with the British High Commission or whether the High Commission was informed of her arrest.

She said she was introduced to an Attorney by a prison guard and had no opportunity to give instructions to the Attorney but was required to pay a fee of Rs.5,000.

She said the prison guard who was in charge, while at court, made several lewd, obscene and disparaging remarks of a sexually nature while being detained behind bars in the court room and at the conclusion of her case, her attorney informed her that she would be deported, regardless of her entreaties and would be permitted to leave to Maldives and till then detained at a deportation centre.

The petitioner said a woman prison guard had asked her to give her Rs.10,000 and attempted to take her mobile phone.

She said she was subjected to a full body search by a female officer and that an inmate provided her a mat to sleep for the night with 60 females inmates sharing the room. (S.S.Selvanayagam) / Daily Mirror