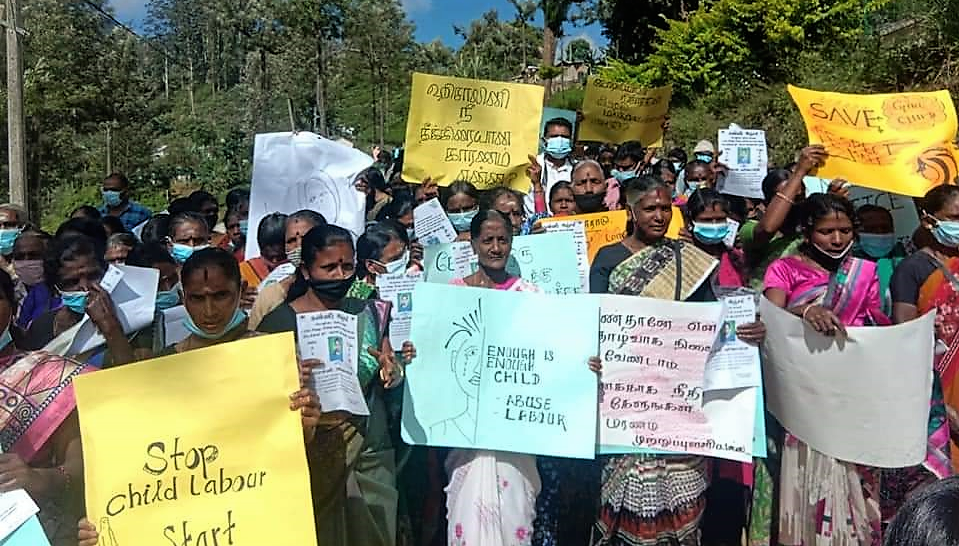 Image: Upcountry Tamil people campaign for the justice of Ishalini, 16 year old domestic worker, who has been sexually exploited at a parliamentarian’s house.

The death of a 16-year-old girl who had  been employed as a domestic house maid at parliamentarian and leader of the All Ceylon Makkal Congress (ACMC), Rishad Bathiudeen’s house has led to strong condemnations of the child slavery and sexual abuse of children in Sri Lanka.

The girl, Ishalini who passed away on 15 July, was admitted to the Colombo National Hospital on 3 July with severe  burn injuries. The subsequent judicial medical examination revealed that she had been subjected to prolonged sexual abuse.

The existence  of a net work of brokers who sell underage girls of the Tamil plantation community  for domestic slavery has also came to be known following the Ishalini’s death.

Confirming brokers role, the Movement for Plantation People’s Land Rights (MPPLR) says that ” “Some of these families have no choice other than to send their children to work. There are brokers here who facilitate this process, although with the onset of the pandemic.”

Rights defenders are calling for justice and transparent investigation in to the incident.

Children and parents are facing challenges due to Covid 19. School education has virtually collapsed in the estate sector. We are looking into the information that there is an increase of children migrating out of plantations as domestic helpers during COVID. The recent incident indicates that the child was an under age when she was brought as a domestic helper.

Postmortem inquiry has revealed of sexual abuse over a period of time. The case must not be allowed drag. Expeditious action is required related to investigation. There is a concern that the police will delay the investigation process. This is a test case where inaction and delay will reflect badly in Sri Lanka’s commitments towards UN Child Rights Convention. The status of the household where she was employed should  not be a hindrance nor cause delays. All perpetrators must be brought before the law. The persons who recruited an under age child and the middle man who sold the child has violated  laws of the country. The family members especially the mother of Ishalini this girl too should be provided legal assistance to provide all relevant information to assist in the information.

Finding the agent would reveal hidden information. It is also the responsibility of members of Hon Rishad’s household to provide all information they have in relation to the incident,the middle man and support the investigation process. We all fought together to seek justice for Rizana, an underage domestic worker killed in Saudi Arabia.. We similarly will call upon for justice to Ishalinii. These are our children whom we have to protect.

In each troubling incident like this, we usually have to demand justice. Why do we have to demand justice, when every legal case deserves fair trial and justice, and when such a fair trial has been recognized as a fundamental right by the Sri Lankan constitution? We know that impunity has been very much a part of Sri Lankan culture, especially when powerful persons are involved. The other issue is court delay. When do we get justice for this case? It is not a surprise, if it takes 10 or 15 years.

But let’s look into details.

This case is about employing a child. But law will recognize as employing a young person. It was in January 2021, Sri Lanka raised minimum age of employment from 14 years to 16 years. Until this year it was legal to employ a 14 years old child. Even in raising the age of employment, primary concern was for encouraging children to undertake full time education up to O/L exam.

There was no policy level or public discussion that employing children aged 14 years is morally wrong.

Domestic workers do not have EPF/ETF or any other employment benefits. They do not have trade unions. The domestic workers in Sri Lanka often come from poor marginalized communities, often from the ethnic community of upcountry Tamils. Poverty in such communities is systematically maintained for a reason. Their poverty produces cheap labour of domestic workers for both local and international markets, and also supplies labour for tea estates. Rights of domestic workers have been much less recognized by legal and policy frameworks both locally and regionally. Usually, they remain poor throughout their life and face crisis in the older age. Usually, there is no social security system for them.

As I’ve read in the newspapers, the girl has been either raped or sexually abused before her death. She has allegedly made a statement at the death bed claiming that she had attempted suicide. Being a victim of sexual abuse or rape is very difficult and inhumane circumstance for any human being. It denies basic human dignity, and easily could traumatize one’s entire life. Any human being does not deserve to be sexually abused or raped, especially children deserve much protection and attention.

But what is the justice for a sexually abused child? We rarely look at it from the point of the child. Justice is not only punishing the perpetrator, but also the best interest of the child. If the child labour/ death of a sexually abused child is a result of historic discrimination and inter-generational poverty of a specific community, justice is the eradication of such discrimination and poverty. I believe all children have dreams, including poor children, sexually abused children, and children who work as domestic workers. It is unfortunate that child protection systems in Sri Lanka fail many ways to help them to reach their dreams.

In a country where basic morality does not exist, the rich and powerful do anything and get away with it – Kshama R Ranawana , Activist and journalis

Hishalini’s case is emblematic of the way we treat women and children in Sri Lanka, especially those of the disadvantaged communities across the country.

In a country where basic morality does not exist, the rich and powerful do anything and get away with it. Many of our legislators, the lawmakers from the topmost positions to the backbenchers are lawbreakers. The very fact that Hishalini was employed in the home of a parliamentarian proves that fact. It is reported that she had been 15 years old when first employed. Amongst the privileged, a child of that age would be receiving an education.
The media is also reporting that a postmortem has found this child had been subjected to sexual abuse.

We also need to ask ourselves whether this case is getting so much attention, because Ishalini was employed in the home of MP Rishad Bathuideen, now held on charges connected to the Easter 2019 bombings, and a favourite whipping boy of the current government lackeys. If it happened in the house of some other politician or otherwise well-known personality would it receive the same attention? When news broke about the online trafficking of a 15 year old girl for sexual purposes and those politicians close to the current government were involved, there were reports that opposition politicians too were involved.

Soon, it became a case of politicians hurling accusations at each other and making it a political issue, while the real problem was overlooked. What happens to the victim here?
A picket has been organised for July 22 outside the NCPA to protest against child labour and child abuse, using the Ishalini case as an example. But is that enough? We protest, we march against such excesses, and then we move on. For most of society, the incident will be forgotten even before it began!

The larger picture is for all of us civilians and lawmakers alike to work together, be more vigilant.

Why are children being sent out to work as domestics? Isn’t it an indication that the so called poverty alleviation programmes have failed? The same goes for the attempts to raise awareness on sexual abuse, especially of minors. Supporters of the current government did not even allow the “Hathe Ape Potha” to be given to children claiming it would corrupt the minds of children. We need to ask, which is the bigger issue here? Protecting children from physical, mental and sexual abuse or allowing predators go free?

That attitude, starting with the police ensures a system, indeed a culture where corruption is the norm, whatever the crime. That has to change. If not, there will be many more Hishalinis, another poster girl for someone’s campaign.

Access to justice & psycho- social support which would help them overcome the trauma is important.- Paba Menike Deshapriya, Activists & Director, The Grassrooted Trust

What made me very sad is that a victim of a sexual violence feels that they have no support. This is symptomatic of our Sri Lankan society; we shame victims of sexual violence and block the support that they need to survive. Even if a victim goes to make a formal complaint, police would ask very uncomfortable questions from the victim like, what were you wearing, why didn’t you run, why it you allow it and so on. There is a very strong “asking for it” perception about victims of sexual violence and we lack understanding about consent.

And we have a lot more do to create a supportive environment for the victims of sexual violence to come forward and to enable and strengthen their access to justice. Another very important aspect is psycho- social support which would help them overcome the trauma.