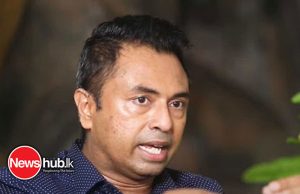 Hiru anchor Chamuditha Samarawickrema has been told he was under investigation for undermining the government’s reputation.

After being summoned to the Colombo Crime Division (CCD), recently Samarawickrema had been asked to furnish a statement in respect of his controversial comments on a government move to import 100,000 kgs of ‘ponni’ rice after having repeatedly claimed that it was having a surplus of the staple, mismanagement of the ongoing Covid-19 vaccination drive and the rescinding of a decision to give Pfizer vaccine as the second dose to those who had received Oxford AstraZeneca (Covishield) first shot.

The former Media Director to President Maithripala Sirisena told The Island that he had declined to do so as he was not forewarned by the police as regards such an investigation when he reported to the CCD as requested. Samarawickrema said that he believed the CCD summoned him to record a second statement as regards his complaint pertaining to an alleged threat to his life following strong criticism of the police handling makeup artist Chandimal Jayasinghe having a party at the Shangri-La in violation of Covid-19 health guidelines.

The CCD had initiated an inquiry following a complaint received from IGP C. D. Wickremaratne.

Samarawickrema said that as far as he was aware, no TV presenter had ever been investigated for comments made on a live programme.

The police have shown Samarawickrema video footage of three statements in question made on Hiru morning show ‘Paththare Visthare’ in the recent past.

Samarawickrema said that he was quite disappointed those in authority found fault with the media for simply taking up issues on behalf of the hapless public.

Media Minister and co-cabinet spokesman Keheliya Rambukwella recently told The Island that he consulted lawyers as regards Sirasa telecasts in particular and overall television reportage of various developments as the media couldn’t be allowed to abuse the freedom they enjoyed. The Minister said that the government respected the rights of the media though some sections obviously abused the print, electronic and social media.

Samarawickrema pointed out that the three issues the police wanted to question him had received the attention of independent media. Samarawickrema said that the media questioned Trade Minister Bandula Gunawardena’s declaration of planned rice imports as the Agriculture Minister Mahindananda Aluthgamage was on record as having said he wouldn’t need rice imports. Aluthgamage declared that he was having a surplus of rice for the consumption of the local market. Samarawickrema said that the Human Rights Commission of Sri Lanka (HRCSL) sought an explanation from the Director General of Health Services (DGHS) over serious lapses on the part of those responsible for the vaccination drive.

Referring to a recent The Island report, Samarawickrema said that the HRCSL alleged that DGHS didn’t even bother to respond to its request. The media from time to time exposed corruption, irregularities and nepotism in the vaccination programme though health and military authorities worked hard to achieve targets. Inoculation of hundreds of outsiders over a period of two days at Galle were case in point, Samarawickrema said, such shortcomings had been admitted in parliament by State Minister Prof. Channa Jayasumana. Subsequently, two senior doctors were moved out of Galle and now a case was being heard in that regard, Samarawickrema said.

The Island /By Shamindra Ferdinando