Sri Lanka responding to its report, praises the UN WG on Arbitrary Detention at HRC 39 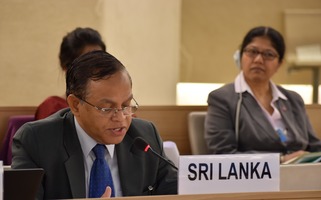 Mr. President,
Sri Lanka is pleased to join this clustered ID with the Working Group on Enforced or Involuntary Disappearances (WGEID) and the WG on Arbitrary Detention. We avail of this opportunity to share the views of the Government of Sri Lanka on the Report (A/HRC/39/45/Add.2) presented to this Council today by the Working Group on Arbitrary Detention, following visit to Sri Lanka in December 2017. We had a similar opportunity during 33rd Session of the HRC, to engage on the presentation of the report by the WGEID of their country visit. We are pleased that, as of date, 8 Special procedures including the 2 Working Groups have undertaken visits to the country and 5 have presented their reports pursuant to the standing invitation extended by the Government of Sri Lanka in December 2015. Scheduling of further visits by several other Special Procedure Mandate Holders are currently underway.

The Government of Sri Lanka’s policy of constructive engagement and dialogue has over the past three years, resulted a number of proactive and pragmatic measures aimed to advance human rights and fundamental freedoms. This is, in addition to the regular and periodic engagements with the HRC mechanisms and cooperation with HR Treaty Bodies as well. 06 reviews on periodic Treaty Body reports submitted by Sri Lanka have taken place since 2015. Recommendations made by these bodies are being considered seriously, and some of which in fact have been already implemented while, in respect of others, progress is continuing. These useful technical advice and recommendations remain among the implementation priorities of the GoSL. The constructive engagement, as acknowledged by all SRs and WGs, extends to providing unfettered access, and necessary cooperation to fulfill their respective mandates throughout the entire process.
Our engagement and cooperation with the WGEID and WG on Arbitrary Detention unambiguously testifies to the priority we attach to open and candid exchanges. Sri Lanka’s implementation priorities arising from the recommendations contained in the reports of these mechanisms are reflected in the 5 year National Human Rights Actions Plan adopted by the Cabinet of Ministers in October 2017 and in the continuing follow up.

The WG on Arbitrary Detention deserves our appreciation for the manner in which it has processed the Report on their visit that is presented to this August body. The opportunity given to Sri Lanka as the country concerned, to provide any objective information and updates besides any errors in facts or laws, is much valued.

Mr. President,
It needs to be noted that GoSL has on all these occasions ensured open and inclusive consultation and collaboration with stakeholders including the relevant line Ministries and agencies, the Civil Society Organizations and the Human Rights Commission of Sri
Lanka (HRCSL). Currently as we finalize Sri Lanka’s 6th Periodic Report to the Human Rights Committee under the International Covenant on Civil and Political Rights (ICCPR), we continue the same process of inclusive consultation. The processes followed for Sri Lanka’s State Report to the 3rd cycle of the Universal Periodic Review in November 2018 as well as Sri Lanka’s National Human Rights Action Plan 2017-2021 emain instructive in this context.

Mr. President,
As acknowledged in the Report of the Working Group, Sri Lanka has achieved a number of positive developments in the areas of strengthening governance, rules of law and advancing human rights. These are a direct result of sustained efforts made by the GoSL
through legislative and policy processes and establishment of independent institutions. We are pleased to enumerate here some of such developments, relevant for the mandate of the Working Group:

– Sri Lanka, a State Party to all core human rights treaties, acceded to the Optional Protocol to the Convention against Torture, and designated the Human Rights Commission of Sri Lanka as the National Preventive Mechanism on 5 December 2017. In terms of the OPCAT, the UN Sub Committee on Prevention of Torture, would have unrestricted access to places of detention; and to information concerning persons deprived of their liberty, as well as their conditions of detention.

– Sri Lanka has also made a declaration under Article 22 of the Convention against Torture subscribing to the communication procedure of the Treaty Body.

– The provisions of the International Convention for the Protection of All Persons from Enforced Disappearance have been given effect to, through an Act of Parliament enacted on 7 March 2018. Persons deprived of liberty are accordingly guaranteed by the Act, the right to
communicate and to be visited by his/her relatives, attorney-at-law or any other person  of his/her choice, as applicable under that Act.
The Act also guarantees access to places of detention by the HRCSL.

– As acknowledged by the Working Group, the Agreement entered into between the  GoSL and the ICRC on cooperation and humanitarian activities on 7 June 2018, ensures  unfettered access by ICRC to all detainees and detention centres under the purview of GoSL with the exception of military personnel detained under the military law in military establishments.

– Appointment of Commissioners to the Office on Missing Persons, an independent institution established by an Act of Parliament was made in February 2018.

– On 5 September 2018, following extensive consultations conducted by the Chairperson and the Commissioners with the relatives of victims of disappearances as well as with government officials and civil society actors in several districts, the OMP has submitted an Interim Report with wide-ranging recommendations. The GoSL has allocated Sri Lanka Rupees 1.4 billion (approximately 9 million USD) in the National Budget for 2018, for the OMP. In exercise of its mandate, the OMP has ensured assistance for the excavation of a suspected mass grave site in Mannar, to investigate and trace disappeared people.

– The draft Counter Terrorism Act (CTA), aimed to replace the Prevention of Terrorism Act, consistent with human rights safeguards and international standards has been evolved. With approval by the Cabinet of Ministers, the draft legislation will be presented
to Parliament, in accordance with the established procedure.

The GoSL engaged with several international stakeholders including the UN Counterterrorism Executive Directorate, the OHCHR and the ICRC in formulating the draft CTA. It is pertinent to mention there were civil society representatives involved in the drafting process and that a wide range of views were taken into consideration and international expertise sought.

This process of engagement and dialogue will continue. Amendments can be introduced during the sectoral oversight committee and committee stage consultations. In the meantime, since July 2017, a de facto administrative moratorium preventing new arrests under the PTA remains in effect and all persons who had been arrested under the PTA are being held under judicial detention. There are at present 58 persons against whom charges have been framed and trials are proceeding, while 05 persons are awaiting indictments following assessments to be concluded shortly by the Attorney General.

– The 19th Amendment to the Constitution of Sri Lanka guarantees its citizens, without discrimination, the right of access to any information as provided for by law. In terms of the Right to Information Act no. 12 of 2016 which gives effect to this constitutional right, all public authorities should ensure the implementation of the citizens’ right to information. An independent Right to Information Commission established by the Act is fully empowered to hold inquiries and recommend disciplinary action in cases of noncompliance.

– On 21 May 2018, the Parliament enacted an amendment to the Penal Code raising the minimum age of criminal responsibility from 8 to 12 years.

– A draft Bill on Child Protection and Justice is being finalized and the provisions thereof seek to put in place special protection measures for children who are in conflict with the law and children in need of care and protection.

– With launching of the National Human Rights Action Plan 2017- 2021 in November 2017, a three-tier monitoring mechanism has been established to regularly monitor progress being made by line ministries and agencies in implementing the Plan, and to
give necessary guidance and direction.

All the above measures have been taken to complement and strengthen the legal and procedural safeguards, already in place, to ensure protection of the rights of individuals held in detention, including through recourse to justice in the event of violations. Some
of these safeguards are:

– A specific provision in the Fundamental Rights Chapter of the Constitution, namely Article 13 guarantees “Freedom from arbitrary arrest, detention and punishment, and prohibition of retrospective penal legislation”. In the event of a breach or imminent breach of
these rights, the victims, or any person on their behalf can petition the Supreme Court or Court of Appeal for redress.

– Access to legal aid has been ensured to low-income individuals through 77 legal aid centres established islandwide by the state-funded Legal Aid Commission of Sri Lanka.

The services provided by these centres include legal counseling, assistance in litigation including in applications for bail, appeal and fundamental rights violations, and engaging in raising legal awareness and conducting legal clinics.

The GoSL is cognizant of the issues and challenges faced by persons in detention, including delay in the processing of cases and welfare of detainees. The Government is in the process of addressing this issue in a sustainable manner. In October 2016, the Chief Justice directed the Judges of the High Court (which has jurisdiction to try cases of rape, incest, etc.) to take up trials on a day to day basis ensuring the early conclusion of the trials. The Judicial Services Commission has also instructed all High Courts and courts of first instance, directing judges to conclude cases expeditiously.

Several legislative measures have also been taken in recent years with a view to preventing laws delays. These include the introduction of a pre-trial system to the judicial process in 2017 which is now in operation in all District Courts of the country, allocation of funds for Court Automation by introducing File Management Systems, establishment of digital facilities in Courts for filing of cases and the efficient management of case files, providing for the increase of the existing cadre positions of High Court judges from 75 to 110, and most recently, the amendment of the Judicature Act.

Further, steps are being taken to enhance the conditions in prisons and detention facilities. Overcrowding in prisons has gradually decreased over the past 6 years from 486% in 2010 to 148% as of now. Eleven prisons have been identified for relocation to more spacious premises with improved conditions, of which two have already been fully constructed and the inmates relocated while the construction of the others are ongoing.

A Task Force chaired by the Secretary to the Ministry of Justice on Judicial Causes for Prison Overcrowding, established in 2015, addresses issues and options related to prison overcrowding with technical assistance from ICRC. This includes the adoption of a policy pertaining to the payment of fines and the release of long-term prisoners.

With the only three persons currently undergoing rehabilitation, completing the programme by 29th November 2018, the Poonthottam Rehabilitation Centre will be winding up, and after November 2018, it will serve as a Vocational Training Centre. It will help provide vocational training for ex-combatants to enhance their living standards with new employment opportunities.

Mr. President,
Pursuant to UN HRC resolution 30/1, following extensive national consultations, the GoSL has succeeded in establishing and operationalizing the Office on Missing Persons. The GoSL has placed before Parliament for enactment, legislation to establish the Office
for Reparations. A process has already been set in motion towards setting up the mechanisms relating to truth-seeking and accountability.

In addition to the measures highlighted, further measures to implement the activities identified in the National Human Rights Action Plan are in varying stages of progress. The Working Group will be briefed of them, consistent with our policy of constructive
engagement and dialogue.