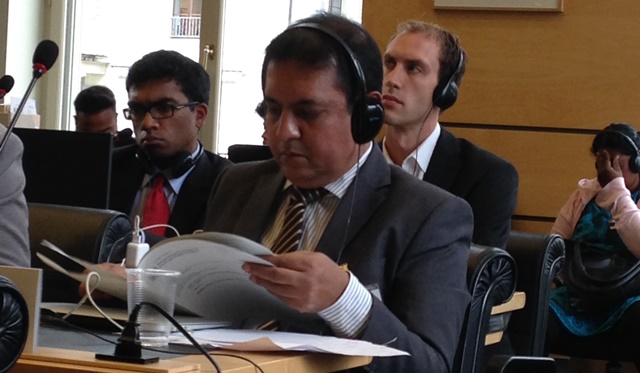 Geneva 07 Oct 2014: Making a submission before the UN Human Rights Committee which reviving the situation of Sri Lanka Attorney at Law Sudarshana Gunawardana said that ” The situation in the country requires immediate attention of the Committee, including in particular the persistent and systematic attacks and reprisals against human rights defenders.” further he raised the issue of disruption of a civil society meeting at  the Centre for Society and Religion by monks led mob on 24th August this yesr,  arrest of human rights defenders, Ms. Balendran Jeyakumari, Mr. Ruki Fernando and Father Praveen Mahesan who were arbitrary arrested this year under the Prevention of Terrorism Act (PTA).

Today the HRC listen to the representatives of the Sri Lanka civil society and the Government of Sri Lanka. The government delegation is being led by Ambassador Ravinatha Ariyasinghe.

This is a joint statement by IMADR and FORUM-ASIA together with civil society organisations in Sri Lanka. The current situation in Sri Lanka contradicts the ICCPR. Incidences of torture, disappearances, extra-judicial killings and custodial deaths have neither been effectively investigated no compensated. Human rights defenders and civil society organisations working on such issues are often targeted with impunity and subjected to intimidation, harassment and reprisals.

For example on 4th August 2014, a group of hard-line Buddhist monks and others, claiming to represent families of missing soldiers, forcibly entered prominent church premises in Colombo that hosts the Centre for Society and Religion and disrupted a meeting. They abused and threatened organisers and human rights defenders present at the meeting including family members of the disappeared from Mannar in Northern Sri Lanka. Despite receiving complaints from two civil society representatives, the police have failed to take any action against those responsible. Human rights defenders working on disappearances continue to be harassed by various pro-Government forces and labelled as “traitors” by different actors including the State-controlled media and pro-Government agitators.

Another example is that of three prominent human rights defenders, Ms. Balendran Jeyakumari, Mr. Ruki Fernando and Father Praveen Mahesan who were arbitrary arrested this year under the Prevention of Terrorism Act (PTA). Ms. Jeyakumari is still in detention without charges. Mr. Fernando, who is present here, is banned from speaking to anyone, locally or internationally, on anything related to his case.

Further restricting civil society space, in his 1st July 2014 letter the Director/Registrar of the National Secretariat for Non Governmental Organisations has clearly threatened the fundamental freedoms of human rights defenders. Copies of this letter were circulated to this committee. According to it, activities deemed “unauthorised” now face the consequence of being “dismantled”. It is feared that the letter targets NGOs that cooperate with the UN or urge the government to uphold democratic principles, respect the rule of law, investigate into disappearances, and inquire into alleged crimes committed during the war and into continuing violations.

We have seen large scales disappearances and extra-judicial killings and the discoveries of mass graves in Matale, Mannar and the Eastern Province. Defenders who work on such issues are repeatedly subjected to fear and intimidation. The situation in the country requires your immediate attention, including in particular the persistent and systematic attacks and reprisals against human rights defenders.

We lastly note that GOSL has taken no step to address the previous 14 concluding observations issued by this Committee in 2003 and hope for better results this time.

Thank you for your attention.