Sri Lanka report of the Special Rapporteur on freedom of religion or belief: Conclusions and Recommendations 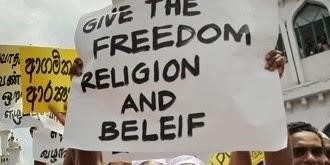 86. Ten years after the end of the lengthy ethnic conflict, there has been no closure on a number of issues arising from that conflict and which the Government had pledged to address at the UN Human Rights Council. While there have been some elementary steps taken, lack of accountability and impunity remains a widespread concern, perpetuating a sense of insecurity among all religious communities. The transitional period has been marked by simmering tensions between the ethno-religious communities. These challenges appear to be related primarily to the state-religion relationship which offers majoritarian privileges, undermining equal protection of the law for minorities. Moreover, there have been recurrent intercommunal violence and religious extremism in the past years before the Easter bombings in 2019.

87. While the legal framework in Sri Lanka guarantees the right to freedom of religion or belief for everyone, in practice there are several challenges to the enjoyment of this right. Religious minorities face restrictions in the manifestation of their religion or belief, their places of worship are desecrated while their religious activities such as worship sessions are disrupted by locals and the authorities. There is difficulty for the minority religious communities to build new places of worship while some places were forced to close down due to arbitrary registration requirements. Non-Roman Catholic Christians are also exposed to numerous incidents of violent attack due to a suspicion of ‘unethical conversion’ and limitations on their right to proselytize. Aggressive campaigns by militant nationalist and religious groups against ethnic, religious and other minorities, particularly Muslims, are particularly concerning.

88. The Rapporteur notes that the current education system deepens the division among different religious and ethnic groups and needs urgent reform with a new curriculum that promotes the values of tolerance, embraces diversity, and fosters a common or unifying “Sri Lankan identity”. Women and girls as well as the LGBT+ persons are rendered more vulnerable in their positions when some religious teachings tend to marginalise them in their rights to equal treatment. Patriarchy and religious marriage laws discriminate against women and disadvantage them in many personal status related matters. It would be vital to ensure a comprehensive reform of both the MMDA and the General Ordinance on Marriage to comply with international law standards on gender equality.

89. Against this background, the Special Rapporteur recommends the Government of Sri Lanka to:

(a) Take concrete steps to address all the identified root causes of religious intolerance and tensions and to promote trust among different ethnic and religious communities in Sri Lanka. He recommends drawing on the action plan in Human Rights Council Resolution 16/18, and Beirut Declaration and its 18 Commitments on “Faith for Rights”, in activities designed to promote inter-religious dialogue and foster pluralism;
(b) Address impunity and the lack of accountability urgently by fulfilling the pledges to various international human rights mechanisms and set up relevant mechanisms accordingly; investigate all incidents of violence, and prosecute all perpetrators of incitement to violence, including the Easter bombings, subsequent violence and other human rights violations;
(c) Combat violent extremism while ensuring that any strategies to prevent violent extremism or counter terrorism are in compliance with international human rights law;
(d) Develop monitoring mechanisms to establish early warning systems and respond to hate speech and incitement to violence in conformity with international human rights standards using existing tools such as the Rabat Plan of Action and the Fez Plan of Action;
(e) Repeal the Prevention of Terrorism Act 1979 and revise the provisions of the Penal Code that relate to various offences on religion-related matter;
(f) Reform the education system to foster inclusive identities to prepare children for responsible life in a free society, in the spirit of understanding, peace, tolerance, gender equality, and friendship among all peoples, ethnic, and religious groups and persons of indigenous origin;
(g) Encourage voices of moderate religious leaders, and support local interfaith initiatives;
(h) Empower women to have more roles in inter-religious dialogues and ensure that their rights are not restricted under religious marriage laws.

(a) The media and social media platforms to enforce community standards and invest more resources to monitor and respond to incitement to hatred or violence while protecting freedom of expression and access to information.
(b) Religious leaders to speak out against hateful narratives and reject efforts to ostracise and stigmatise minority communities and persons in vulnerable situations; promote moderate voices and stress the need for sustainable intercommunal and interreligious dialogue for trust and peacebuilding as well as reconciliation.