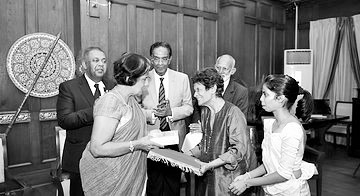 Image: Mrs. Manouri Muttetuwegama presented the report of the “Consultation Task Force on Reconciliation Mechanisms” to  chair of the SCRM Chandrika Kumarathunga.

Issuing a statement the National War Heroes Front says that  report of the “Consultation Task Force on Reconciliation Mechanisms” (CTFRM) set up on 26.1.1916, & chaired by Mrs. Manouri Muttetuwegama is a most treacherous document. This is seen clearly and immediately by the fact that the report was fully endorsed and welcomed by both the TNA and the GTF. TNA is the political arm of the LTTE and GTF is an NGO once banned under the UN Charter for directly supporting the LTTE. The LTTE is, even as yet, categorized as the most ruthless terrorist organization in the world and it is still in the banned list of 32 countries worldwide.” The statement is singed the statement issued by the President of the National War Heroes Front Rear Admiral (Retired) Sarath Weerasekera.

Excerpts  from the statement follows:

It is a lowly and a contemptuous attempt, by CTFRM together with TNA and GTF, to seek punishment and bring discredit to the war heroes who survived. How much money has been paid officially /unofficially to the eleven members of the CTFRM by the separatist Tamil Diaspora is not known, for, no one with an iota of patriotism would present a report based purely on the evidence of people instigated by the separatist TNA.

The head of the UNHRC, Zeid Hussein, has also welcomed the recommendations of the CTFRM. … So a report which could bring a grin on to the face of Zeid Hussein would also be one of such nature, and hence should be rejected in toto.

The Report also says that people have no faith in the national judiciary and recommends a hybrid court on the basis of competence/impartiality. If our judges are competent enough to sentence people to death and if it goes unquestioned to date, they should be equally capable of taking decisions on accountability as well. Also if foreign judges are recommended on the basis of competency, in a hybrid court, the entire accountability process would be solely handled by the foreign judges themselves and our judges would be just sitting for namesake. …. If not the Manouri Muttetuwagama panel should be held for contempt of court for ridiculing and insulting our judiciary in the eyes of the world community.

Anyone who betrays the country should be charged for treason. It is up to the Court to interpret and define treason. The important point to remember is that treason is an offense punishable by death. Unlike those who do not have any faith in the local judiciary we are fully confident that our judges are fully capable of defining Treason and punish accordingly.”