Sri Lanka- Remittances: The devil is in the details 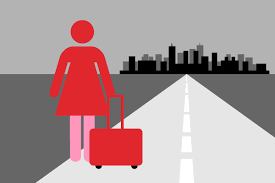 Remittances make an indispensable contribution to the Sri Lankan economy. In 2018, despite experiencing a decline for the second consecutive year, the country received remittances of over $ 7 billion, accounting for 7.9% of the GDP. Often, remittances to Sri Lanka are attributed to temporary migrant workers and viewed from a national perspective. Nevertheless, as highlighted in a recent IPS study by the author, there are more dimensions to remittances. This blog examines the nuances of the receipt of remittances at the household level in Sri Lanka.

This difference in the share of migrant households and remittance-receiving households indicates that either migrants are remitting to more than one household in Sri Lanka or, in addition to those considered migrants originating from Sri Lanka, others too are remitting, or a combinatio 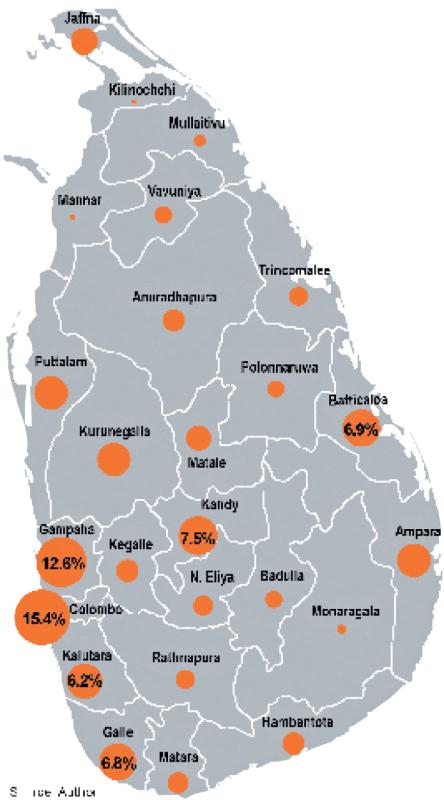 mitters to Sri Lanka? One answer is permanent migrants or Diaspora. Permanent migrants often leave with their immediate family, leaving no one behind to report them as migrants in household-level surveys. Nevertheless, such permanent migrants, and subsequent second and third-generation migrants and Diaspora may still be connected with extended family and friends, and continue to send remittances. Similarly, there could also be other individuals or organisations without a person of Sri Lankan origin remitting to Sri Lanka for various purposes.

The presence of more remittance-receiving households than migrant households has a large geographic variation at the district level.

The other top four districts with the highest share of remittance-receiving households are Batticaloa (21%), Jaffna (16%), Ampara (12%), and Mullaitivu (10%). These findings indicate that in the Eastern and Northern Provinces in Sri Lanka, remitters are less likely to be migrant workers and more likely to be Diaspora and others sending remittances to Sri Lanka. 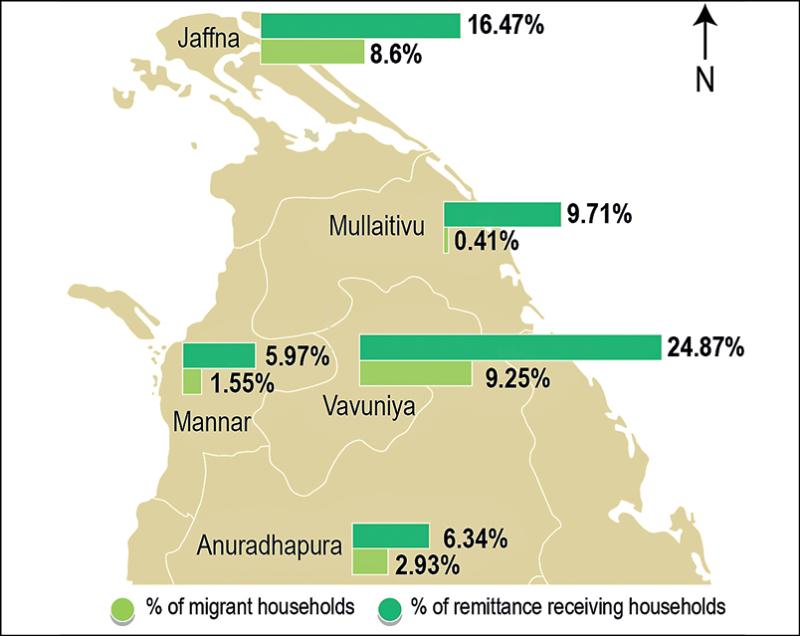 As evident in the above discussed geographic variation, the Eastern and Northern Provinces are emerging as prominent sources for remittances in Sri Lanka. Nevertheless, in terms of the value of remittances received, the Western Province takes the lead. For instance, the Kalutara District records the highest average in household remittances of Rs. 383,557, followed by Colombo, with Rs. 369,792. Interestingly, despite a nominal share of households with migrant and receipt of remittances, the Hambantota District records the third highest average in household remittances with Rs. 353,865.

Make the best of regional variations

The study finds that there are significant geographic variations in terms of the receipt of remittances at the household level. This understanding about the nuances of these geographic variations can be utilised for effective and targeted policy formulation. The noticeable gap in remittance-receiving households in excess of migrant households in the Eastern and Northern Provinces indicates that remittances come from sources beyond migrant workers.

On one hand, in the backdrop of concerns for foreign funding for terrorism associated with the Easter Sunday attacks, greater attention is required to ensure that remittances to Sri Lanka are not a façade for financing terrorism or money laundering.

Specifically, given that the inter-governmental Financial Action Task Force (FATF) identified Sri Lanka as a “high risk third country” with strategic deficiencies in anti-money laundering and countering financing of terrorism laws, careful scrutiny is needed to understand the true facts behind remittances, and refine or introduce required laws accordingly.

On the other hand, the latest data indicate that the poverty headcount is highest in the Northern and Eastern Provinces in Sri Lanka. Given that it is widely accepted that remittances have an inherent capacity to be well targeted to reduce poverty, and are associated with minimum corruption in disbursement, this greater significance of remittances over migration in these provinces should be harnessed to address poverty and improve regional economies.

(Bilesha Weeraratne is a Research Fellow at the Institute of Policy Studies of Sri Lanka [IPS]. To speak to the author, email [email protected] To view this article online and to share your comments, visit the IPS blog “Talking Economics” – http://www.ips.lk/talkingeconomics/)