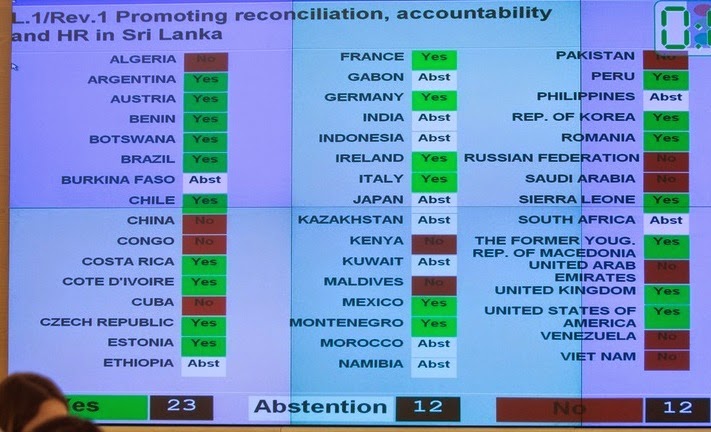 BHARATHA MALLAWARACHI  (AP)
Sri Lanka’s foreign minister said Monday that his country will not cooperate with the United Nations human rights chief when she begins an investigation into alleged crimes from the island nation’s civil war.
Gamini Lakshman Peiris said that Sri Lanka does not accept the authority of U.N. High Commissioner for Human Rights Navi Pillay to conduct an investigation. He said such an investigation will not be fair and objective because Pillay has a prejudged mind.
“Sri Lanka will not be participating in the inquiry. We don’t accept this inquiry and we will not be part of it,” Peiris told a news conference at the Foreign Correspondents’ Association.
He also said that financial contributions to the inquiry from countries that accuse Sri Lanka could lead to a potential conflict of interest.
The 47-member U.N. Human Rights Council approved an inquiry last month with 23 votes in favor and 12 against. Twelve other countries abstained from the vote for the U.S.-sponsored resolution.
The Sri Lankan government and the defeated Tamil Tiger rebels both have been accused of serious abuses in the war that ended in 2009. Sri Lankan troops defeated the rebels in May that year, killing nearly all of its front-line leadership and fighters.
A U.N. report found that up to 40,000 ethnic Tamil civilians may have been killed in just the final months of the war. The government disputes that figure.
Peiris said that from the early days since the end of the war, Pillay was vocal against Sri Lanka.
Sri Lankan government officials have previously questioned Pillay’s impartiality, citing her Tamil background.
During a visit to Sri Lanka last year, Pillay called the allegations not only wrong but deeply offensive