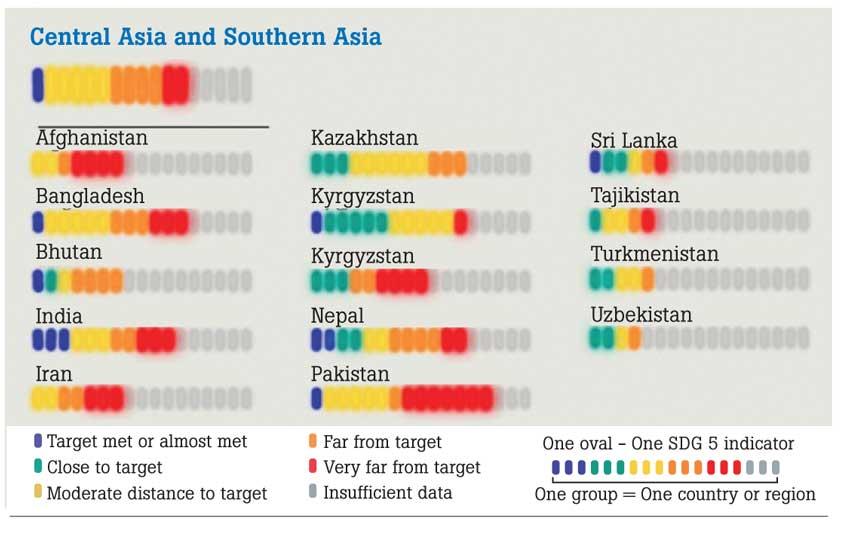 Amongst 187 countries, Sri Lanka ranks 97 with a Human Development Index (HDI) of 0.691. But it does even better on gender with a rank of 74 for its Gender Inequality Index (GII).

Sri Lanka stands among the nations that has made little progress in achieving the gender equality target under Sustainable Development Goals by the year 2030, the latest assessment by UN Women revealed.

Sri Lanka ranks low on the list of Central and South Asian countries in this regard, and stands with Tajikistan, Turkmenistan, Uzbekistan.

To achieve gender equality and empower all women and girls by 2030 is one of the 17 Sustainable Development Goals (SDGs).

According to the assessment of progress tracker of the SDG goal five (SDG 5) by the UN, Sri Lanka has managed to meet only one indicator of the overall target.

For the remaining indicators, there is insufficient data available to track progress.

Overall, Central and Southern Asia as a region is not on track to achieving gender equality by 2030. Across the region, out of 18 indicators for the SDGs, only one has met the target.

Progress on SDG 5 is measured using 9 targets, made up of 18 indicators and sub-indicators.

On time spent on unpaid care and domestic work (Target 5.4), a critical area for women’s empowerment, no country has met the target of equality between men and women.

“Data gaps prevent us from seeing the full picture of progress, but from the data we do have, the outlook is grim,”the UN said, while pointing out that where data are missing, women and girls are invisible.

Only 48 percent of data needed to monitor SDG 5 are currently available.

The UN stressed that more and better gender data are needed to accurately diagnose the barriers and spur the necessary policy dialogue on gender equality that drives change.