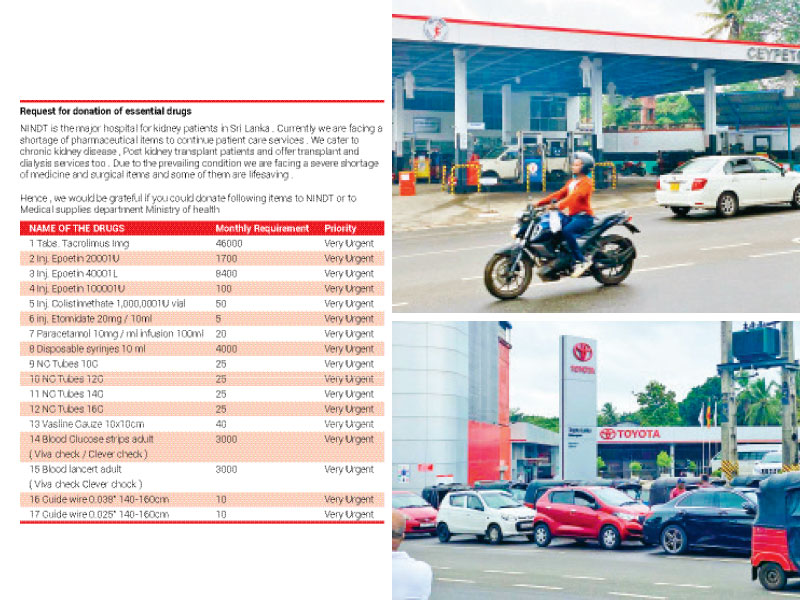 Sri Lanka’s free health service has suffered thrust after thrust from the cutting edge of the economic crisis, till it was brought to its knees by the end of last week.  ‘Apeksha Hospital’ for cancer patients mourned in pain as the fuel crisis affected the service providers and the patients coming in for treatment. The hospital which steadfastly functioned, no matter what trade union action was taken by doctors, nurses, and its other service categories, or the many drug shortages that were reported from time to time, mourned that its services would collapse very soon if nothing was done to help the staff obtain fuel for their vehicles to report to duty.

Health employees, who are labelled as a ‘clan’ that generally fuss at the drop of a hat, quite bravely provided their services to patients even amid petrol and diesel shortages that affected even their mode of transport to hospital and back. It finally got to a point where they decided that they could not spend 14 to 15 hours in queues waiting for fuel bowsers to arrive when there were suffering patients awaiting their arrival at the Outpatient Department (OPD), at clinics, or in wards.

Health Minister Keheliya Rambukwella said health service employees have been allocated the Friday of every week to pump fuel to their vehicles in a bid to prevent a collapse in the state health service.

At a Media briefing last week, Minister Rambukwella told the Media that 74 fuel stations had been identified to serve health employees every Friday. Therefore, health service staff including professorial staff from medical faculties, medical specialists, doctors, nurses and health assistants in the country can have the tanks of their vehicles filled, as had been decided following discussions with his Cabinet counterpart for Power and Energy, Minister Kanchana Wijesekera.

Director of Apeksha Hospital, Dr. Aruna Jayasekera said the present crisis may ease somewhat with the implementation of the special day allocated for the health service. Fuel stations in Navinna, Kohuwala, and a few other fuel stations had been identified for the health employees in Colombo. The hospital has over 1,000 staff members, he said.

Dr. Jayasekera explained that the hospital had been able to overcome some of its drug shortages with the donations that had been given. But, Apeksha also receives a large amount of assistance from the public that don’t hesitate to provide the patients of the hospital with food and medicines and every other need, including their own hair to make wigs for patients undergoing chemotherapy.

These are not issues that cannot be resolved with some special planning as was done during the time when the country was affected by the Covid pandemic, Oncological Surgeon at Apeksha Hospital, Dr. Kanishka De Silva said. The plus point under the circumstances is that with the drastic reduction in Covid-19 patients they don’t have the added burden of having to undergo a PCR test prior to surgery and wait for the result. Touching on the present drug crisis in the country, Dr. De Silva said some of the drug issues facing the hospital had been partially resolved with support. At the same time, there are some drug shortages which are not at a totally manageable level. Luckily, the Health Ministry issued a certain amount recently, while the medicines that are unavailable have to be purchased by the patients. He said the involvement by the many Collages of Medicine in Sri Lanka such as the College of Anaesthesiologists and Intensivists helped in getting the Government’s support to resolve some of the drug issues at the Hospital under the present circumstances.

At the same time, surgeons and doctors have to resort to alternative methods and alternative medicines to treat patients. For instance, surgeons have to use suture material rather than staplers during certain surgical interventions, he said.

Although Friday had been allocated for the health service staff to get fuel for their motor vehicles, no staff member can just set aside their duties at the hospital and rush to fuel stations to fill petrol or diesel for their vehicles, said the Surgeon. The fuel crisis that had been faced by the health staff had reached the level of disruption of services due to delays caused by languishing in fuel queues. There was a time when the anaesthetist could not make it to the hospital, as there was no fuel, and no taxi service willing to risk the distance of having to bring him to the hospital.

Despite the special date allocated for the Health service to obtain fuel for their vehicles, there should be a mechanism like the one which was implemented during the Covid-19 pandemic where bus services were allotted to health staff to travel to their homes and to work.

“The major hospital for kidney patients in Sri Lanka is facing a shortage of medicinal drugs and other pharmaceutical items to continue patient care, Director, National Institute for Nephrology Dialysis and Transplantation (NINDT), Dr. Charles Nugawela said. He said they included two of the most essential drugs required for transplant and dialysis. One of them being ‘Tacrolimus’ 1 mg, a drug which is used to prevent rejection of a kidney following transplant surgery. Therefore, the drug needs to be given to transplant patients. The hospital has a requirement of 46,000 tablets per month.

The other essential drug that is required is Epoetin used on dialysis patients. The Medical Supplies Division (MSD) and donors, especially have been a tremendous support to the hospital in providing the pharmaceutical items that were required. “But we have been managing the situation by limiting usage to two weeks.”

The shortage of other drugs has been managed by using alternatives, Dr. Nugawela said.

He said there was fuel for the hospital’s ambulances and vehicles used for patient transport. However, doctors and other hospital staff have either opted to use public transport or motorcycles in a bid to cope with the fuel crisis.

The Director said there were about 60 patients for dialysis and around 200 clinical patients visiting the hospital daily.

Consultant Physician, Dr. Gayan Ranasinghe who had also taken his vehicle to pump fuel on Friday (24), said although the Health Ministry in collaboration with the Ministry of Power and Energy had arranged for the state health service to obtain fuel for their vehicles, there were no preparations in place to ensure that sheds had fuel to supply to those vehicles. A total of nine sheds had been identified for the health professionals in Colombo. They included the sheds in Borella, Ranala, Dematagoda, and Nawinna.

Triage Coordinator Training, Pushpa Ramyani Zoysa said the impact of the fuel crisis had been severe on the health staff of the NHSL Colombo. The hospital staff is already under severe stress. Having to spend time in a queue for hours and then report for night duty or on duty at the hospital theatre has not been easy. She said that although the health employees had been treated as ‘Suwa Wiruwo,’ during the Covid-19 pandemic, the public have shown very little concern at least considering the fact that to have health workers languishing in queues would probably lead to the loss of life or limb of accident victims or a patient who has undergone surgery.

She also said all hospital staff could not go to petrol sheds on one given day of the week, as they could be on duty on that particular day. The weekends are hectic. And since of late there is an increase in the number of victims being brought to hospital after being assaulted.

Health Minister Keheliya Rambukwella pledged that the country would not be facing a shortage of medicines and other medical equipment by August 2022 owing to the procurement of the same as a result of the large amount of loans and assistance the country had received.

He said the present difficult period would last till only about August 2022. “No one would be able to say that there was a drug shortage in the country at least till mid 2023 after that,” he reassured.

Sri Lanka has witnessed deaths due to dengue, Covid-19, and accidents, but having to die while attempting to obtain basic needs like petrol, diesel, and kerosene oil, or due to shortage of medicinal drugs is something that is unimaginable for a country which had moved from being a developing country to a middle income country by 2019. The Health services were able to see the nation through the Covid pandemic, not to have people drop dead in fuel queues!